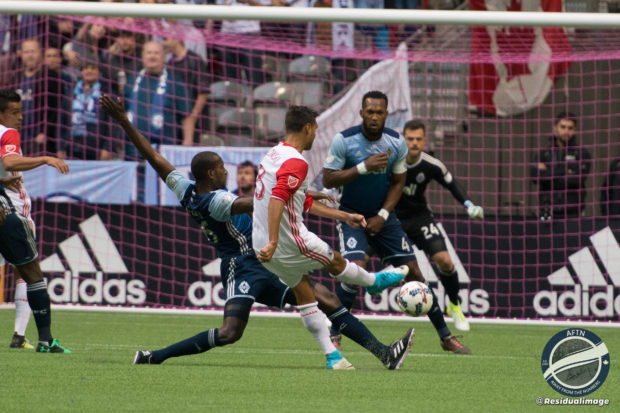 The time has come. The season defining game against San Jose Earthquakes will take place on Wednesday night at BC Place. While many are disappointed that the Whitecaps have to play this extra game to begin with, the fact that postseason football is happening in BC is not an achievement that can be swept under the carpet. But make no mistake, if the ‘Caps crash out of the playoffs on Wednesday, the fanbase will not be happy and will be looking for answers.

The good news is, the ‘Caps know their opponents well. It was less than two weeks ago that these teams squared off at BC Place, with San Jose grabbing a point through Vako, and the Whitecaps unable to add to Jordy Reyna’s go ahead goal, despite having numerous counter attacking chances.

It was a disappointing result that would ultimately cost the ‘Caps a first round bye, and force this extra midweek game before the first leg of the conference finals this coming weekend. It also gives the team another game to sort itself out. Consistency in the Whitecaps has been hard to come by, perhaps facing a team that barely made it above the playoff line is what Vancouver Whitecaps need to get some momentum going.

That being said, the Earthquakes are the team coming into this game on a high after an injury time goal secured their playoff fate and triggered dressing room celebrations. The team will have confidence and nothing to lose, which is a dangerous proposition for the ‘Caps, who have been taking cautious approaches and usually take a bit of time to feel games out.

Chris Wondolowski has remained the focal point for the Quakes attack, with Vako capable of making runs beyond him, as we saw for their all important goal in Vancouver. Shea Salinas’ trickery and delivery are also a familiar sight to Vancouverites. Jordan Harvey, who you’d expect to get the start at left back but who will have Marcel de Jong breathing down his neck for his position, will have to watch him closely, as on his day he can be a difference maker.

I am hoping that the game has a similar rhythm to the recent game in Vancouver, with the Whitecaps getting a lot of joy on the counter. But I suspect the Quakes management will recognize that the onus is on Vancouver to do something here, and sit back a little so the ‘Caps are not able to play their game. With Victor Bernardez and Florian Jungwirth at the back, they can have potential to frustrate, although an all time low goal difference for a playoff team of -21 suggests otherwise.

The Whitecaps backline should remain untouched for this game. Marinovic seems to be the go to man, with Nerwinski, Waston, Parker and Harvey in front of him. We will need a slightly more assertive game from Nerwinski and Harvey on Wednesday if the ‘Caps wish to be dominant. In the midfield.

I expect to see a return of the Ghazal-Tchani partnership, if Nosa were at full fitness I would prefer him, and I expect him to challenge for that spot next season. But for now, and after Nosa cramping up in Portland, you have to go with the tried and tested pairing.

Reyna is an undoubted starter, and his decision making will be paramount. If he was a bit sharper, the ‘Caps might have won the San Jose game easily. The question now becomes: who will start in the wide positions. I would go with Shea and Techera. Shea doesn’t get much love from the ‘Caps fans, but I do believe him to be a functional and defensively responsible player. Techera is possibly the most consistent set piece deliverer, after Bolanos’ horrendous game last weekend against Portland. But the Costa Rican’s experience at the top level may make him hard for Robinson to leave out in this one.

Up top, it’s Montero. I expect the ‘Caps to have a lot more possession than usual, so getting quality service to Fredy will be vital. The wingers will have to have a good game.

Chris Wondolowski – evergreen club legend and regular Vancouver slayer. He’s been coming up with some big assists of late.