When MLS announced the fixtures for the season they added that the playoff format would be confirmed at a later date.

Knowing the bizarre nature of some of the rules in the League this was a worrying prospect for some. Surely the playoff format should be fairly straight forward. Why would there be a need to wait? Was some weird system about to be revealed? 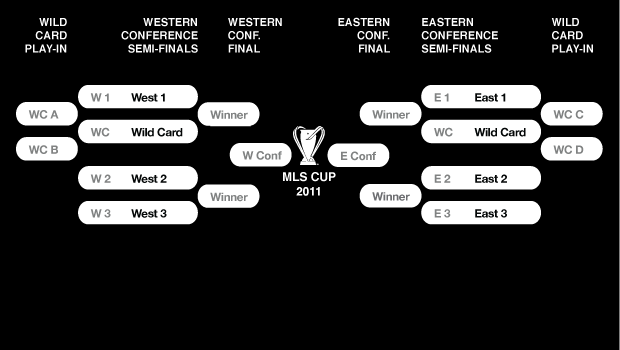 We got all the answers on Wednesday and it’s not totally bizarre after all thankfully – just a little bit. It’s understandable in a logisitical sense, just not a footballing one.

Under the 2011 MLS playoff format, TEN of these 18 teams will qualify for the playoffs, but it’s not going to be a straight five and five Conference split. Oh no, that would make things way too easy.

* The top three finishers in each Conference, based on regular season points, will get one of the six automatic playoff berths

* The next best four clubs, again based on regular season points and irrespective of which Conference they play in, will make up the four “wild cards”

Confused yet? Well, you will be. Just keep reading.

* The four wild cards will contest “play in” single elimination games against each other, with higher placed teams becoming the higher seeds and hosting (1 v 4 / 2 v 3)

Seriously. WTF. Football is a simple game. It was designed in simpler times and some would say for simpler people. Why the need to make things so fucking complicated?

I’m not a fan of playoffs in general. I agree it’s a more exciting end of season and you can’t argue with some of the recent end of season crackers we’ve had in the English League playoffs.

I also accept that it’s the North American way, so there has to be playoffs of some sort and I can live with that. It gives me extra games to watch for one thing and that can’t be a bad thing (most of the time).

Ten teams though. Come on. Over 50% of your league should not still be in Championship contention come post-season. The play-in games in particular serve no purpose except to raise more money for the League and certain clubs, whilst trying to appease as many clubs as possible so that their season won’t be over too early.

If you’re one of the 8 clubs to miss out altogether, then you must be really shit. Hello Toronto.

A balanced schedule is great. A single table with no Conferences would be even better. Why would you have Conferences in the first place if you don’t have an even post-season split? What on earth is wrong with an 8 team play-off and a proper 4/4 Conference split?

We could have 3 Eastern team and 7 Western teams in the playoffs this year (or vice versa). Crazy and not a way to grow the sport from coast to coast.

You also have the farcical prospect of the 10th placed team being crowned Champions at the very end of it all, no matter how many points they finished behind the Supporters’ Shield winners.

Surely having so many teams qualify for the playoffs is going to reduce the standard of many end of season games.

Once you’re in the playoffs, anyone can beat anyone and if you’re not in with a shout for the Supporters Shield, there’s no real incentive to play your strongest team as it may not really matter where you finish.

This will give you a rested squad for the playoffs and a possible competitive edge. On the other hand it could really boost the chances of teams playing you later in the season when they need something and you don’t.

Like so much of MLS, none of this make sense on a footballing level to me. Am I alone here or is this just my UK background clouding my opinion on this issue?

You have to piss with the cock you’ve got though and for the Whitecaps, that cock just got a little bit bigger. Maybe a new sponsorship deal with VigRX Plus is in order.