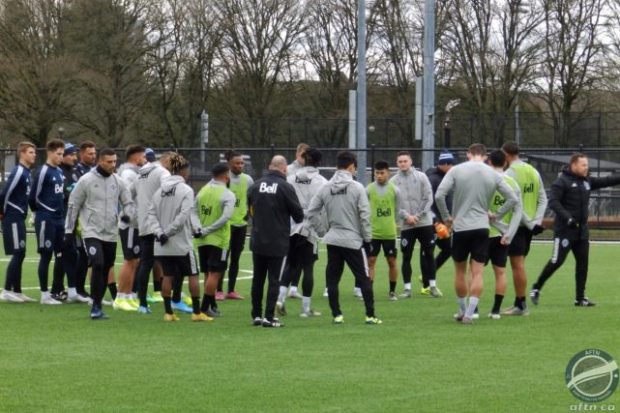 It feels like an age ago now that Vancouver Whitecaps last kicked a ball in anger in MLS. It was 106 days to be precise. It’s been a slow offseason since then, with the majority of the action taking place in the front office rather than the first team squad, with Axel Schuster announced as the club’s new Sporting Director and Mark Pannes appointed the new CEO.

Lucas Cavallini’s signing in December was the pre-Christmas gift to the fans, but it’s been pretty quiet on the playing side, slightly remedied this past week with the additions of Canadian left back Cristián Gutiérrez and Colombian winger Cristian Dájome.

Neither of the latter two were present as the ‘Caps took to the training pitch for the first time in 2020 on Monday – Gutiérrez had a flight from hell in from Chile, delayed for 11 hours, while Dájome will join up with the group in San Diego as he sorts out all his visas.

The Whitecaps’ preseason training camp got underway at UBC without them, a tough two hour session where the players that were on the pitch were put through some fast paced drills and scrimmages from the word go. Afterwards the message was a clear one from all – 2019 is in the past, it’s all about looking forward now to what 2020 will bring and beyond. 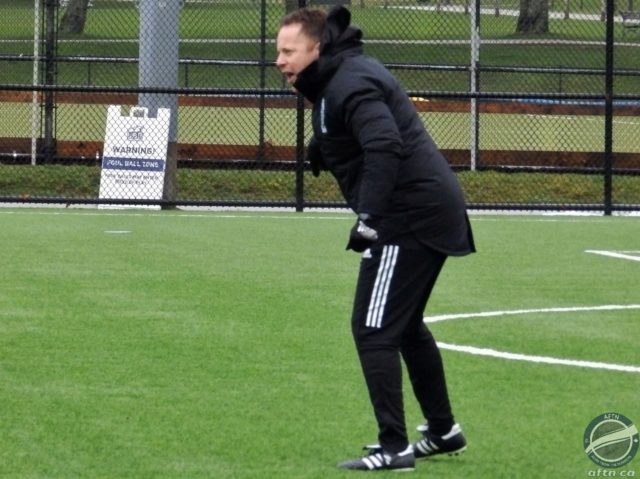 The optimism and the enthusiasm was high, but the glaring holes in the Whitecaps squad are very clear for all to see. The midfield is weak, with a creative playmaker or two badly needed, and a destroyer type number six would be nice too. A winger is likely needed, along with a back-up right back, and even if you factor in the imminent return of Erik Godoy, there’s at least one other centre back required on the roster.

Schuster told reporters on Monday that he expects to have “three to four more faces” in the squad by the time the first match comes around on February 29th, faces that Dos Santos noted “are all additions to do a plus to what we have right now.”

The German is “optimistic” a midfielder could be announced before the team head off to San Diego on Friday and while it’s all not ideal, at least there is a marked difference in the training camp to a year ago, where Marc Dos Santos was forced into a trip to Hawaii with a bunch of young development squad and academy players in tow. This year there’s just three – goalkeeper Isaac Boehmer, centre back Gianfranco Facchineri, and midfielder Patrick Metcalfe.

Second round draft pick, goalkeeper David Gagliardi, is also in the camp, trying to earn both a back-up spot to Max Crepeau against former Residency standout Thomas Hasal, and an actual MLS deal. Gagliardi is one of five trialists in this stage of the preseason camp.

The other four all provide a tantalising proposition, offering something Vancouver needs and coming to camp after impressing elsewhere in 2019.

Now before we get too carried away or pump any of these guys’ tires up too much, it has to be noted that we’ve seen a lot of trialists in these camps over the years and very, very few have made the grade. The main exception was Camilo, who played in the 2011 preseason tournament as a trialist, impressed, and the rest if history.

But let’s look at just who is battling for a roster spot right now and what they offer the ‘Caps. 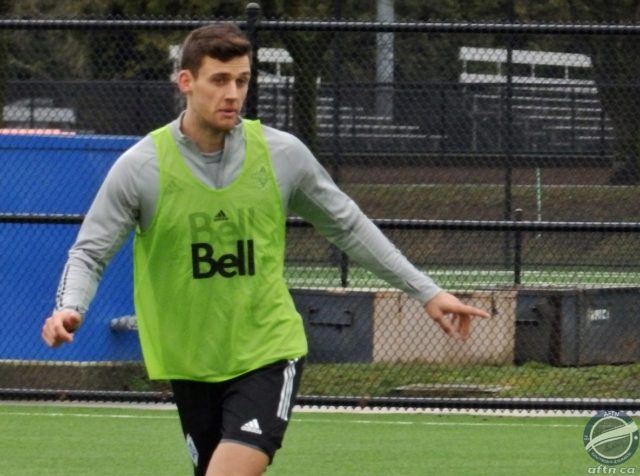 What a difference a year makes for Didic. Released by Sporting Kansas City at the end of the 2018 MLS season without ever making an appearance in his three years there, it was uncertain where his future lay. I thought he may have been a player Dos Santos would have brought here a year ago, knowing him from their Swope Park Rangers days. In the end he signed a USL deal with San Antonio, mutually agreeing to part ways after just two appearances, then heading to the CPL to join FC Edmonton.

It was that move back to his hometown that revitalised his career. A stellar individual CPL season saw him invited to two Canadian men’s national team camps last year, impressing enough to join the most recent camp this month where he made his international debut, playing and scoring in the 4-1 win over Barbados, then keeping his place for the 1-0 loss to Iceland.

Didic is a quality, solid centre back who does all the basics well. His 6 foot 5 height makes him a natural force in the air, but don’t let that height take away from the fact that he is an excellent ball playing defender with some excellent distribution. That delivery would be a huge asset to the Whitecaps backline, possibly even giving Dos Santos options for three at the back at times, and with only Cornelius, Khmiri, and (basically) Godoy signed, there is a vacant spot on the roster in the centre back position.

He’s also a free agent, with a clause in his Edmonton contract allowing him to leave for a MLS deal. It feels like a no-brainer to bring him on board, but he still has to impress in camp to earn that deal. 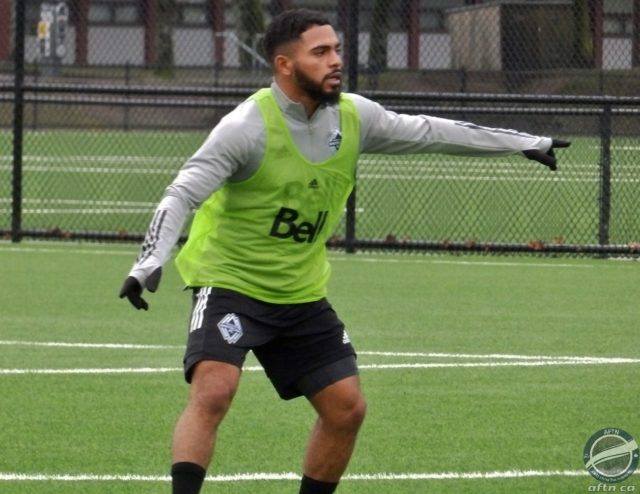 Another interesting defender on trial is 20-year-old English/Welsh right back Cole Dasilva. He a versatile player who can also play left back and he started as a left winger in his youth days.

After coming through the youth ranks at Luton Town he joined Chelsea, winning the UEFA Youth League, English Youth League, and FA Youth Cup with them, and playing up to their U23 side before being released in the summer of 2018. He then joined Brentford B team on a two-year deal.

Born in England, he’s represented Wales at U21 level and below and has played in the Toulon tournament. He’s from a footballing family. His older brother Jay plays with Bristol City and his twin brother Rio is with non-league Hitchin Town.

His versatility might appeal to the ‘Caps. He’s two-footed and has pace. Seems a random addition, but you’re not with a club like Chelsea for those amount of years without having something. 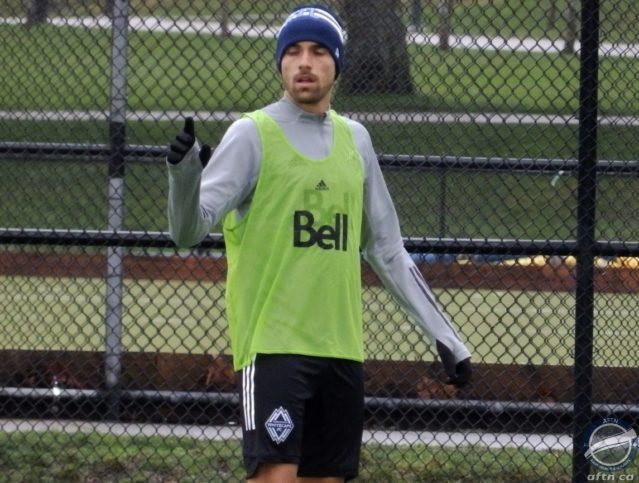 Rodrigo da Costa is a 26-year-old Brazilian midfielder who is coming off a fantastic individual inaugural season in the USL with Tulsa Roughnecks. As a team, they didn’t have a great season but da Costa was the man that made them tick with 9 goals and a very impressive 13 assists in 33 appearances.

Was with Florida National University before that, and had a very strong senior year.

Da Costa grew up playing futsal from the age of five, transitioning to grass and joining the Botafogo youth system before earning a NCAA scholarship. Another player from a footballing family, is father, grandfather, and great grandfather all played at his levels.

Watching his highlights from last year, he’s a player that can finish, provide, and has an eye for the spectacular, as one of his bicycle goals demonstrates. The burning question is can he do it at the higher level and that’s exactly what Dos Santos and his team will want to evaluate. He’s not the starting midfielder the ‘Caps are looking for and need, but as a depth addition it could be a good fit. Some will look down at his achievement at the lower level, but to them I say, look at the success of Mark Anthony Kaye. 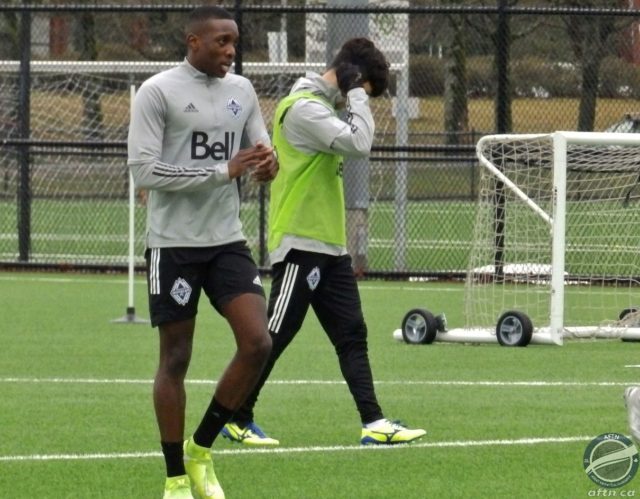 Another midfielder, Aboubacar Sissoko is an interesting one. The current U Sports Player of the Year, he’s been in the Championship game with the Montreal Carabins in the last three seasons, winning in 2018 here in Vancouver.

I commentated on him during that tournament he stood out and impressed me as a player, putting in a solid shift as a box-to-box defensive midfielder.

Born in Mali, and capped at U20 level with them, he’s been here in Quebec since he was 11 because his father was a diplomat. Drafted by Forge in the first ever U Sports draft in 2018, he didn’t feature with them, and was just signed by HFX Wanderers where he was expected to join up next month until this call to camp came along.

He’s certainly a talent, but this could be a step too far, too soon in MLS, so if he impresses, we could see him signed by the ‘Caps and loaned back to Halifax for the season to get more pro experience.

In a year where the squad had all their key players in place, this could be a different environment for the trialists, but with some important pieces still missing, it may be harder for them to impress and they’re likely not the difference makers the team are immediately needing.

That said though, this genuinely feels like a strong and exciting group of players, each of them heading to Vancouver after some personal success, and Dos Santos will certainly be giving them a strong look.

“When we had the chance to bring them on trial, we evaluated the roster spots we have, the supplemental rosters spots we have,” Dos Santos explained. “All of them did something special where they were.

“Amer Didic had a year where he was called to the national team and he had a pretty good year for himself in the CPL. Abou was a player that was named as the best player at the university level in Canada. Rodrigo was in one of the best 11’s in the USL, very important in his side. Cole was an opportunity for us to have him on trial, coming from a great development system. He won the youth Champions League with Chelsea.

“All of them we felt have qualities to bring maybe something to the team. They have a real opportunity. We don’t have all the spots. Maybe one spot for four, maybe two spots for four, maybe the four could sign. We’re looking at it and we’ll take the right decision in the end.”