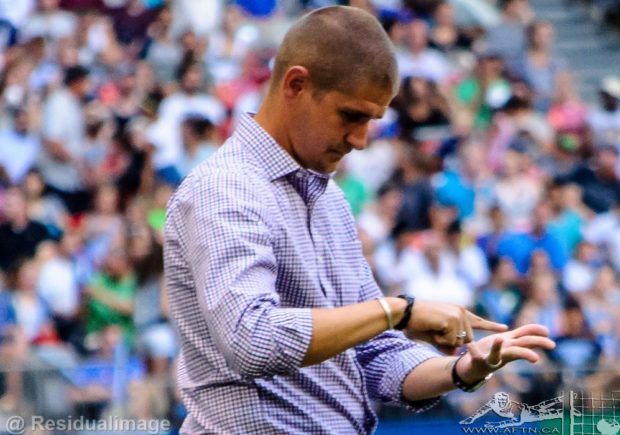 Sunday certainly is ‘Decision Day’ for the Whitecaps.

The ‘Caps have the chance to make history. They could secure their first ever Western Conference regular season title, set a club record for points in the MLS era, and equal their most ever wins in the league. They could also crash and burn, finishing outwith the top two places in the West and blowing a first round playoff bye and some much needed rest. Fines lines indeed.

Of course it’s all a feeling of déjà vu. They had a chance to do all those positives last weekend at home to San Jose. That didn’t work out the way anybody of a Whitecaps persuasion wanted it to, but as disappointing as that was in Vancouver circles, the powers that be at MLS probably couldn’t have believed their luck.

The ‘Caps failure to get the job done a week ago now sets up the mouth-watering winner takes all clash in Portland this Sunday. All eyes will be on Providence Park as the first placed Whitecaps take their two point lead down the I-5 to take on the Timbers. A win or a draw secures first place for the ‘Caps. A defeat will in all likelihood see them finish third, behind their two fierce Cascadian rivals, throwing them into a midweek play-in game.

It couldn’t have been scripted any better. Only Vancouver or Portland can finish first now and they’ll battle it out against each other to see who does just that. Great for the TV ratings, if not the mental health of both sets of supporters.

But whoever does end up grabbing that first place finish will set another record.

The points total of this season’s Western Conference regular season champs will be the lowest of any team to have won it since both the Whitecaps and the Timbers came into the league in 2011.

That record is currently held by Portland, who won the conference in 2013 with 57 points. Whoever wins it this year will do so with a tally of 53 or 55 points.

Here’s how the other years have played out:

Portland also hold the record that year for the least number of victories to win the conference. Fourteen wins secured it for them in 2013. Whoever wins it this year will do so with 15 or 16, the second lowest total from the last seven seasons.

And no matter whether it’s Vancouver or Portland, this year’s winner will have won it after suffering 11 defeats, another record (Seattle and Dallas had 10 losses in 2014 and 2015 respectively).

Not that any of this really matters a jot. A win is a win. By any means necessary, as our mantra has been on the podcast in recent weeks.

This has certainly been the tightest Western Conference race that I can remember, with so much to play for, for so many teams, right up to these last set of matches.

But just why has that been the case?

For years, the Western Conference was clearly seen as the strongest of the two in the league, you certainly can’t say that this season. As things currently stand with one game to go, the five best regular season records in MLS this year are all Eastern Conference clubs.

An accusation levelled from various quarters this year is that the West has been weak. Full of poor teams and lacking quality. No one or two teams stood out as a dominant force. No one could stamp their authority in the conference, especially in the closing weeks when no-one seemed to want to actually win it.

The counter argument to that would have you believe that the West is actually the complete opposite. That it is in fact full of strong, evenly matches teams, capable of beating each other and taking points of each other depending on how the wind blows any particular match. That the parity has been the best yet in the conference.

The truth likely lies somewhere inbetween, and ‘Caps coach Carl Robinson has his own theory as to why the Western points totals ain’t what they used to be.

“I think more Eastern teams have managed to beat more Western team this year,” Robinson told AFTN. “Based upon the points, and I could be wrong and right off it here, the West have dropped points against teams in the East and I think then the West has become so even from top to bottom.

“No-one would have predicted Salt Lake, who were fighting for a playoff place last week, to lose to Colorado at the bottom. There’s some crazy results and I think that the teams in the West have evened out a little bit from top to bottom, which is unusual and the first time in seven or eight years that that’s happened.”

Looking at the stats, he’s not wrong. In the 122 intra-conference matches this season, the East won 52 of them compared to the West’s 38, with 32 of them ending in draws. That means Eastern teams claimed 188 points to the Western teams 146.

It has felt that the West has been distinctly lacking some quality this season.

I’m not sure there’s any team in the conference that fans across the league would regularly get excited to sit down and watch. Some, like Vancouver and Portland, have players that excite and can put in some electrifying team performances when they’re in full flow, but the consistency hasn’t been there.

Then you look at the East, and the likes of Toronto and Atlanta, and at times Chicago. They have played some great football that’s got people talking and the results to show for it.

The top goalscorers in MLS this season are dominated by Eastern Conference players (10 of the top 13). The top three assist leaders are all from the East too. Only Portland and Houston crack the top ten scoring teams for the season.

So if you’ve got this feeling that you can’t shake that the West just doesn’t seem all that great this season, there’s method to your madness.

Will any of this matter come playoff time and the MLS Cup? Seven of the last eight MLS champs have come from the Western Conference. It’s hard not to see the East taking it this year, but in the postseason, the previous 34 games count for little.

Right now in the West, all that matters is that the Whitecaps are top. Can you genuinely say they are the best team in the conference? If not, who would you actually say is?

It’s not been the prettiest route to the top. They may not be considered one of the greatest Western winners of all time. But if they’re still there come 3pm on Sunday afternoon, that’s the only stat in the record books that the Whitecaps will care about.