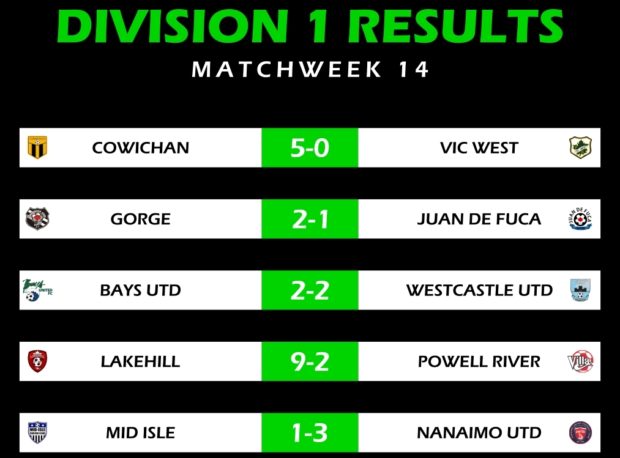 The last weekend of 2019 in the Vancouver Island Soccer League (VISL) top flight is complete, and it delivered with more surprising results.

Division 1 continues to be a division of parity – divided in two halves. Here is how it all broke down this past weekend, with all the scorers – and there were plenty.

Friday also saw a top contenders match as Bays United and Westcastle United battled to a 2-2 draw. Scoring for Westcastle was Kadin Martin-Pereux and Keenen Colley, while scoring both goals for Bays was Ian Whibley.

The last game on Friday night had Gorge FC slip past Juan de Fuca All Flows 2-1 thanks to goals from Brennen McCleary and Zakaria Bougraine. The loan marker for JDF was scored as a result of a Gorge own goal.

Saturday saw Powell River Villa come to town and they were rudely welcomed by league leaders Lakehill, who blew them out 9-2. There were a couple of incredible individual performances for the Reds with Blair Sturrock hitting four and Jon Shah grabbing a hat-trick. Gareth Langdon and Evan Libke got the other two goals for Lakehill, with Jake Kenmuir grabbing a double for Power River.

The final game of the weekend saw Nanaimo United defeating Mid Isle 3-1 on Saturday. Caleb Nwameme got a brace for Nanaimo, with Andres Algarin getting the other. The Mid Isle goal was the result of a Nanaimo own goal.

So after all of those results, the final VISL Division 1 league table of 2019 looks as follow.

The Lakehill win, along with the Bays-Westcastle draw, allows the Reds to extend their lead at the top of the table to six points. A very big draw there – especially as Westcastle have a match in hand against Mid Isle. With the result of the weekend, Lakehill are moving that much closer to earning their first ever VISL Division 1 Championship and lifting the Garrison Cup.

The other results this past weekend mean Gorge, Cowichan, and Bays will have a much tougher time in their quest for the title.

The Nanaimo win on the weekend has also made the bottom of the table a much more of a messy situation as there are three teams that are directly battling to stay away from the 9th spot – which would mean relegation.

Mid Isle still have a mathematical chance of getting out of relegation, but divine intervention would be required.

After all the goals scored on the weekend, here is how the Golden Boot scoring leaderboard looks:

****As noted, Blaze Roberts is also part of the leader-board with his 10 goals.

The Clean Sheet chart had a little change, with leader Darian Achurch now sitting alone at the top after his work on the weekend.

On a side note, his partner on the day, Taylor Joe, earned what might be his first shutout in seven years as a Cowichan keeper.

It was another entertaining weekend of top flight Division 1 soccer on the Island. The Christmas break has now started, a welcomed break for some to say the least as they will have some time to allow for injuries to heal.

For others, they will look forward to the return in January and hope that Santa Claus is extra nice to them early in 2020.

Thanks for supporting local people in the community and local grass roots soccer. Remember you can find all the news, results, fixtures, and standings across all of the VISL divisions at VISL.org.