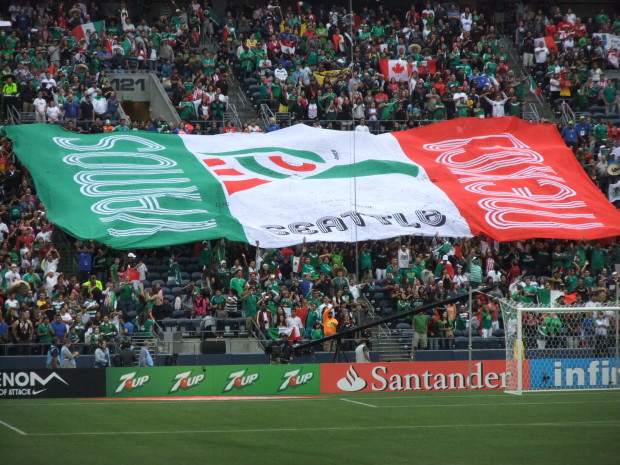 A first half header from Raul Jimenez and a shameful penalty from Marco Fabian gave Mexico a comfortable 2-0 victory over Canada in Gold Cup action in Seattle on Thursday evening.

It’s hard to say that that is all that separated the teams, for Mexico were the far better side throughout, but Canada can take lot from the spirit and fight they showed in a game in which they went into as heavy underdogs.

In the end the depleted young Canadian squad fought hard but were outclassed by a more skillful Mexican side. It was a match though that will be a key one in the future international development of the players in the group.

With Panama just finding enough to eek out a 1-0 win over Martinique, thanks to an 83rd minute penalty from Manuel Gabriel Torres, Canada went in to their second group match still with a hope of qualifying for the quarter finals.

It was more a mathematical hope than a realistic one and so it played out.

Mexico didn’t have their troubles to seek either of late, and with that pressure on they took the game to Canada from the start, in front of what was a partisan crowd at the Clink.

Milan Borjan looked like he was going to have a busy night in the Canadian goal and was forced into action early when Marco Fabian whipped in a free kick from the left in the 4th minute. It was straight at the keeper, forcing him to punch it clear for a corner.

Rafael Marquez came within inches of getting onto a flick on to the back post in the 11th minute, as Mexico enjoyed the share of the possession.

Canada’s best hope was already looking like it would come from a counter attack, with Marcus Haber being left to plough a lone furrow up front.

Haber’s tenacity won Canada a corner in the 15th minute. The ball was cleared out to Samuel Piette and with Mexico’s defence moving up, he delicately played it back in to the box, but just too far for an unmarked Haber and Jonathan Osorio to get on to.

That seemed to settle Canada and they started to enjoyed a greater share of possession. Mexico still looked dangerous and Luis Montes fired narrowly wide midway through the half.

It was Canada though who came closest to opening the scoring in the 29th minute. Kyle Bekker played a free kick deep into the box and Haber did well to outjump Adrian Aldrete to bullet a header on goal but Mexican keeper Jonathan Orozco acrobatically turned it around for a corner.

Canada were growing in confidence and having more forays forward, restricting Mexico to long range efforts.

Borjan hadn’t had much to do since the opening minutes but he came up with a huge leg save in the 42nd minute to keep out Fabian, who benefited from a lucky deflection as he controlled the ball in the box.

If Canada thought their keeper had saved the day for them it was a feeling that was to last only for seconds. The resultant corner was played to Jorge Enriquez at the near post and flicked the ball up perfectly for an unmarked Raul Jimenez to head home untroubled eight yards out.

It was a killer blow for the Canadians and they had to hold on for the closing minutes of the half as Mexico sensed blood. They held firm and headed into the break one down and struggling to find a way back into the game.

The second half started with a little promise for Canada when Issey Nakajima-Farran went on a nice run in to the box in the opening minutes but Mexico soon took complete control.

Fabian had a low long range shot, as the game started to be played inside Canada’s half.

It was no surprise when Mexico went two up in the 57th minute, although they can take no pleasure from how it came about.

Marquez played a delightful ball between David Edgar and Doneil Henry to Fabian, who went down in a heap with no-one around him after indicating that Edgar had caught him on the way through. The referee pointed to the spot, booked the Canadian centreback and Fabian drilled home the penalty.

Mexico were now looking comfortable and able to relax and play some nice passing football. Canada on the other hand were still infuriated by the penalty decision and started to lose their composure.

Edgar was lucky to stay on the pitch in the 68th minute for a shocking kick at Jimenez that only earned him a booking.

Mexico nearly made it three minutes later when Montes and Jimenez played a nice give and go on the edge of the box and Montes fired just past the left hand post.

The game started to fizzle out a little, with Mexico happy to keep possession and Canada struggling to do anything with what they were allowed.

Canada nearly grabbed a consolation goal in the final minute when Marcel De Jong rattled the crossbar with a free kick just outside the box.

As the game entered stoppage time, Mexico found the woodwork themselves when Javier Orozco got on the end of a Jimenez cross and crashed his header off the crossbar with Borjan beaten.

That was to be the last action and the final whistle lifted a little of the weight off Mexican manager Jose Manuel De La Torre. It wasn’t just the three points but the way that they played that will have pleased many of their fans.

For Canada, it was a gutsy performance, if not exactly one that ever looked like getting the three points, and Keven Aleman finally earned a seven minute senior cap, easing fears of his future lying in Costa Rica.

If this tournament is to be seen as key development for Canada’s future prospects, they need to show signs they are learning and growing with every game. With all that has gone on this past week for the team, they can certainly draw some positives from this defeat but there is no doubt that there is still a long way to go and a lot of work to be done.

Milan Borjan on the game:

“I think we played a really good game. They didn’t have a lot of chances. Last game the other team had a lot more chances than Mexico today. I think we played really good. We shaped good, awesome defending, but again we didn’t score a goal and that’s what’s killing us the whole tournament. This one, last time, so I think we need to work on that.”

Milan Borjan on trying to bounce back after the Martinique loss:

“We came out with our heads up high. Today we showed that we can play with any team. We just needed somebody who can score. They had a striker who can score.”

Milan Borjan on the Panama game:

Samuel Piette on the game:

“I think we were more disciplined defensively. Mexico were a good side but it was hard for them to get through us.”

Keven Aleman on being cap tied to Canada:

“If I didn’t think we could go forward I wouldn’t stay here. I think that the Canada program is moving on well and the players that are staying are very good. I’m happy. I’m happy to stay on board.”

Keven Aleman on the chances of playing in MLS with the Whitecaps: