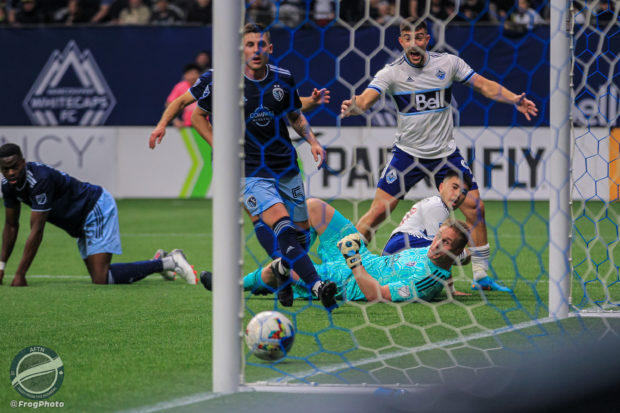 We all need a little break now and then. It gives you time to unwind, refresh, and work on improvement. Sometimes it works, sometimes it doesn’t. In Vancouver Whitecaps’ case their recent two weeks off for the international break seems to have been the tonic they were needing, coming back to BC Place on Saturday evening with a pep in their step, some players back healthy, and coming away with their first win of the 2022 MLS season.

It wasn’t a classic, but right now getting down and dirty and getting the job done is really what the Whitecaps had to do to get their season off and running. Ryan Raposo was the difference maker, scoring the only goal of the game in the 73rd minute, his first MLS goal, to give the ‘Caps a 1-0 win and a much needed three points that saw them move off the foot of the Western Conference standings.

It’s been a tough start to the season injury-wise for the Whitecaps, but they were able to get two of their key absentees back for this one, with Brian White leading the line and Ryan Gauld slotting back in behind. Raposo was also handed a rare start after impressing in training, and it was an opportunity he seized with both hands.

There wasn’t much to write home about in the first half, with KC having a Khiry Shelton effort fired wide in the 14th minute, before White came close to getting on a low Deiber Caicedo cross in the 32nd minute, but Tim Melia smothered the danger as the pair collided in the six yard box.

The second half started in a similar manner, with Daniel Salloi’s 52nd minute low shot that forced a comfortable easy stop for Thomas Hasal being the only real action of the opening exchanges.

Roger Espinoza had a great chance to put KC ahead five minutes after the hour mark when the ball came to him wide open 10 yards out but he fired his effort high and over when he should have done much better. That was to be as good as it got for the visitors.

Lucas Cavallini played a lovely ball out wide to Raposo. Some neat interplay, including a lovely chip into the box from Michael Baldisimo, and some defensive confusion, saw the ball break to Raposo on the edge of the six yard box and he poked it past Melia for what was to be the match winner.

Caicedo hit a shot into the side netting three minutes later, but the ‘Caps comfortably saw out the remainder of the match, with KC offering very little in the way of a real threat.

The only negative for Vancouver came in the last minute when Tristan Blackmon was forced off under concussion protocols, bleeding from the head after a collision with Ranko Veselinovic.

But a good start to April for the Whitecaps after a disappointing first few games of the season. It wasn’t pretty, it wasn’t dynamically convincing, but a win is a win and it now gives them something to build upon ahead of their first Cascadian derby of the season next weekend when Portland Timbers come to town.

On the first win of the season:

“Feels very good, very good for the win for sure but also for the performance. We’ve been clearly the better team on the pitch, better with all the chances, we always played in their half. Even at the end of the last 10 minutes they were throwing these balls, but we haven’t faced, I would say, too much. That’s a very good starting point for our season. Here at BC Place of course it was the second game, not the first one, but after the break and everything, we know that we need to win as many games as we can here because the games away are hard. So yeah, that’s a good engine to go into the week for Portland next week.”

“I had two to three conversations with [Ryan] during the preseason because, especially with the system he always played as a classic winger, in a 4-3-3 or 4-2-3-1. He was feeling a little bit left out, and I told him ‘You need to work a lot because, probably, you’re not going to start at the beginning, but you’re so versatile’. He can play wingback, he can play striker, he can play number 10. He is always going to be in the 20 and there will be chances for him. He worked a lot, he deserved the start and I’m very happy that he scored. So yeah, I’m very happy for him.”

On his goal celebration:

“Crazy, I found out yesterday that I was going to be starting and texted my mom. She was on night shifts at the hospital. I messaged her late, she replied and actually booked the flight from Toronto, she had to drive to Toronto an hour then she flew to Abbotsford and I drove to Abbotsford to pick her up. It meant the world to me that she was there. As soon as I hit the back of the net, I pointed towards her section. She was in that general section so I knew she was there watching. I can only imagine what she was going through, probably crazy and in tears.”

On being included in the Starting XI:

“Maybe a little surprised, but honestly the fact that he trusted me, it gave me that extra bit of confidence that I really need to hear, that little push that he truly believes in me. For example, in the past, the games that I’ve started it’s been circumstantial per se, we need to rotate the squad or something of that nature. So yeah, I felt like I’m just there to do the job, but we’ve had two weeks since the last match. I’ve trained really well over the past two weeks. I did my part just putting in the work every day with my teammates. Again, when Vanni said I was going to be starting, it gave me that real confidence boost that I needed.”

“It’s a great feeling, winning is a contagious feeling. This group is such a good group. We’ve played well so far this season, but this was by far our best performance from the first minute to the 90th. Whatever we played today, those last three minutes felt like about seven or eight but this was a good performance for us. A performance that we can build on, a character-building performance. Look, we got true real warriors on this team. You see guys coming in the locker room, blood everywhere. You look at Tristan his head was cut and he’s got back up and he gave the fans a salute. You talk about guys like Ryan Raposo, who’s been around for a little bit now and he takes this opportunity and it takes a real warrior and I don’t necessarily mean that in a physical sense, but in a mental sense, because when you don’t start all the time when you don’t get a ton of opportunities, when you’re able to take a chance when it comes that takes a real warrior to do that. I think we talk about the physical battles almost every week and we calculate duels won, but what we don’t calculate is the mental side of things. That’s something that you can’t quantify is somebody’s mentality and this group’s got strong mentality.”

“I’m not going to say one player is made or broken out in one game. So Ryan’s still got a ton of work to do just like every other person on this team, because you can always get better, you can always learn, you can always grow. But again, I want to go back to what I said earlier about Ryan and that takes a real strong personality to always fight through adversity to keep coming to work every day, to do the hard work when no one’s watching, to be a good trainer, to push the squad. I think that’s what he’s done and then he gets his goal, look how happy he was, we were so happy for him. He’s such a good kid and he’s such a good teammate, he never complains and he does the work. That’s all you can from somebody, is give 100 percent and he definitely does that.”

The only thing that was lacking was goals. Our game plan was good. We took advantage of the things that we talked about. We actually did. We just need to score the chances that we had. We had some very good chances that we either didn’t execute on the final shot in a good technical way or we just were too slow in the trigger. What we lacked tonight was scoring goals, that’s the bottom line.

On the goal conceded:

I don’t know anything about the offside. I haven’t seen the replay to judge that. Sorry, but I don’t know that. I have no idea.

On the second half substitutions:

We created some good chances. The game got wide open and we knew that we were going to have to make subs going into the game just because, as I said before, there’s a lot of guys still coming back off injury and they’re just not 100% at this moment. But regardless, we create chances prior to those guys leaving and then after those guys went off, we created chances. We just needed to score.

I think we dominated most of the game. We created chances. I don’t think they created much. They got a few lucky bounces and then they stick it in the back of the net that and that’s about it. We just need to get in the next week and work on our finishing and some more things and we’ll get it right.

On the fouls against Khiry Shelton:

Honestly, from my angle, I thought it was a foul. From what I saw, Khiry got pulled from behind, but I haven’t seen a replay so I can’t really say much on it.

On the team’s road struggles:

We’re just going to keep working hard every day at training. We’ll come in next week and reassess and look over the game film and the mistakes that we had. I don’t think we’re worried at all about that because we’ll get it figured out for sure.

On returning from injury:

I think it was important for me to get back on my feet and try to get a solid 45 minutes. That’s what we have done at the beginning so I’m happy for that. I think we did a good job and unfortunately we couldn’t get the result but at least I’m healthy. I’m feeling good. That’s a good thing for me.

On the goal conceded:

I haven’t seen any replay but it went fast and at the end, I think what they did is what we expected: kick long balls, get second balls and go from there. So unfortunately, I cannot comment more because I didn’t see it on TV.

On the attack needing to build chemistry:

Well, it may be a little bit of that. I think at the end of the day you have those days that it’s hard and the goal doesn’t come to you. I think we got a couple of good chances that we didn’t capitalize but unfortunately, as you guys saw, we couldn’t score and hopefully next week we’ll come back stronger and get more in sync altogether.