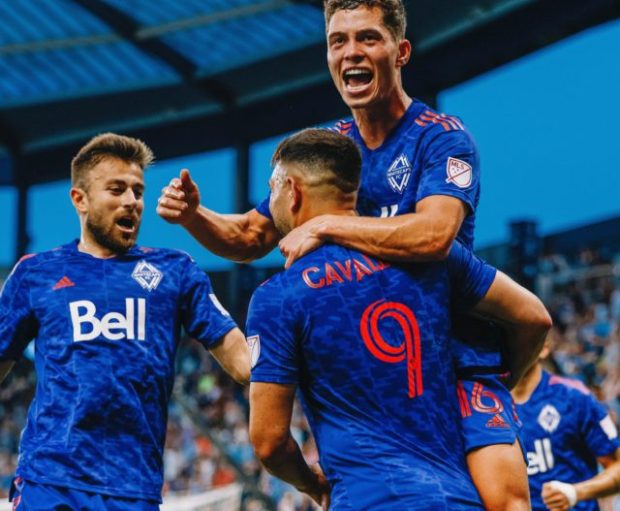 Three games in a week and seven matches in three weeks is bound to take a toll on any team, never mind one down to the bare bones due to injuries, absences, and health and safety protocols. That’s been the hand dealt to Vancouver Whitecaps in a hectic month of May. To then end the month with their first away win of the season, a 1-0 victory at Sporting Kansas City, to move off the bottom of the Western Conference standings is simply fantastic.

Lucas Cavallini’s penalty midway through the first half was the difference maker in what, let’s be brutally honest, was a horrible game of football. The Whitecaps comfortably saw out the second half and killed off the game against one of the most impotent KC sides you’re likely to see.

Vanni Sartini made six changes to the team that overcame Cavalry FC on penalties midweek in the Canadian Championship, with the biggest surprise being Florian Jungwirth deployed in the number six role in a 3-5-2 formation.

It was a slow, uneventful start from both sides in the hot conditions, but the game suddenly burst into life in the 22nd minute when Cristian Dajome broke forward for Vancouver. Oriol Rosell made a crucial tackle to knock the ball away from the Colombian but the loose ball was picked up quickly by Cavallini, who powered into the box. Rosell stuck out a leg and brought down the ‘Caps player and referee Ted Unkel pointed to the spot.

Cavallini picked himself up and took the spot kick, finishing with his second panenka in four days to give Vancouver a vital lead. He really needs to not do that next time around though!

The pressure was now on the home side to respond, but while they huffed, they had very little puff, with their best effort coming in the closing minutes of the half when Johnny Russell got the ball in front of goal but scuffed his shot wide, and Vancouver headed into the break with a 1-0 advantage, their first lead at the break of the season.

And it was a lead that was never under threat in a second half that lacked any real goalscoring threat from either side until Javain Brown headed Nicolas Isimat-Mirin’s header off the goalline with the last action of the game deep into stoppage time.

Grinding out results like this when the team is down on their luck is what can sometimes turn a season around, or save one.

Vancouver knew what they needed to do, which was hold firm at the back and try and sneak something on a quick counter. Once they got ahead, they defended well and Jungwirth ran the show in his defensive midfield role.

With players now getting healthy, the ‘Caps need to push on from this result in a big way at home to Real Salt Lake next Saturday. They’ve climbed to 11th in the West ahead of Sunday’s game and once again sit four points back of the playoff line. It’s starting to look promising once again in Whitecapsland. Let’s home June brings more of the same in terms of results, and less of the absences.

“We deserved the win. It’s the beautiful cherry on top of the fantastic month of May that we had and it’s given us the wind to enter June and the summer, that normally it’s the decisive moment to get into the playoffs, with a good outlook.”

On keeping the momentum going:

“Feels amazing. I think we were lasting for that win for many, many weeks and months. I think the last month was really good for us, we got points at home, we advanced in the cup, won two games. In Charlotte, despite the circumstances, I think we gave them a great fight where we should have earned a point and today you could feel, it’s always easy to say when you’re in, but you could feel today’s something special because that week was crazy with all the traveling. I think so far, we’ve been like 14 hours on the plane in six days. And we knew that today and we are really glad.”

On playing in the midfield:

“It was great for me. I’ve always said that’s my favorite position, played the position in Germany for most of my career, San Jose a couple of times and when Vanni came to me and informed me, obviously, I had a big smile on my face because when you can play in your favorite position, it’s always great, but of course, I’m not a kid anymore. I know how complex that is for Vanni to set up a lineup. I want to be a coach as well one day, and I know how hard it is. He has to find the best 11, how they fit together and cannot always look for everyone’s desires and wishes, but obviously like I said, I had a big smile on my face and I was happy to play that position today.”

“I think it was a great performance, each and every guy gave it their all. We knew that that’s what it’s going to take for us to get three points and we did it, and hence we got three points.”

On racking up points:

“We’re a strong team at home, we knew that we have to get points on the road for us to even think about the playoffs and this is the first step. We’re just going to take each and every game as a step. We’re not going to look at, ‘okay, we got five more games at home’ and stuff like that. Each and every game is important, it doesn’t matter if we play at home or away.”

On the team being shutout:

Too many guys we have to move in and out of positions and no routine. It was tough from that perspective, but the guys gave everything. I appreciate that.

On concluding a stretch of seven games in 22 days:

It’ll be good for us to get a break and get ourselves reset and hopefully get a few guys back. That will help with the rotation of players at the moment.

On the difference in tonight’s match:

On what went wrong in the match:

They had a penalty kick and they scored. We had a couple of chances, and we didn’t score them. The guys did the most they could based on the situation and players playing all over the place. They tried at the end.

On what he hopes the players get out of the international break:

Hopefully get some rest and we’ll start accumulating some points.

On how the players looked after playing the midweek match:

We were starting to build into the right direction after the Portland game. We got a win, a tie, an excellent comeback result in the Open Cup and then we let this opportunity slip. We have got to look that in the face. We’re down guys, but they’re down just as many guys. We’re in our own house here. Ultimately, we need to just kind of shut it down. We need guys back. We need to get healthy. But this isn’t over yet. We’re not even close to over yet. We have so much season left. We have got to use this break to our advantage, get everyone back, and then come out flying.

On what piece was missing in the final third:

Our combination wasn’t great, but I think it was a little bit of fatigue for sure. Guys have been running themselves into the ground. Our combination play wasn’t great. We weren’t putting our attackers in the best situations. We weren’t supplying extra numbers coming up in the back. But none of that is important. The thing that we have to do right now is give ourselves a little bit of a mental break and come back flying because we’re not out of this. We’re not even close to being out of this yet.

On the performances from players who have stepped up this past month:

We can make this so positive because we can come back from this break and start accumulating points, climbing up the ladder and start getting some other guys back. And now we’ve gotten all these young players really good minutes in stressful situations, which is really good for your professional growth. So ultimately it will make us stronger. We have just got to come out flying.

On Vancouver’s defense after they went up:

They were defending very well. They defended very well and props to them for coming in here and doing that. We were trying to find a way. We created some opportunities and we just needed to finish them. That’s how the game goes sometimes, and you’ve just got to keep fighting.

Hard work. Hard work. Every day, every game, every training, I come and play very hard. Thank you to Sporting for drafting me in 2008. It all started there with them giving me a chance and an opportunity to become a professional. Everything is due to Sporting, and I’m very thankful and grateful for this. I haven’t taken anything for granted at this club from the first day I came here. I keep working hard for this club, and I can only have gratitude for the opportunity they gave me.