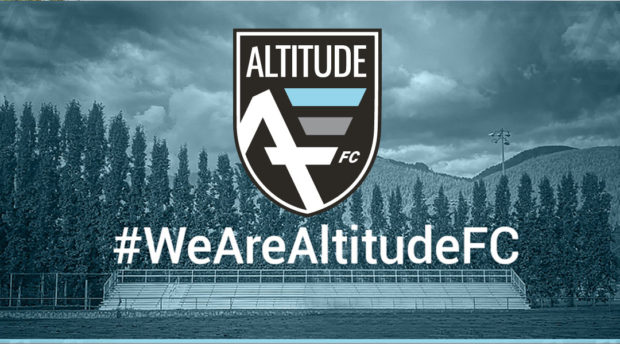 The inaugural League1 BC season got underway on Sunday, with all seven clubs now having played their first matches in both the men’s and women’s divisions.

Four clubs have now had their home openers, and they’ll be joined on Sunday by Altitude FC, who will be playing their first ever matches at Kinsmen Park in North Vancouver when they take on the Vancouver Whitecaps academy sides. The women’s game kicks off at 1pm, with the men kicking off at 3.30pm. You can get tickets for the double header HERE and it would be great if you can get out and support the newest sports team on the north shore.

To get you up to speed for the matches, we continue our profile of the Altitude FC squad for the 2022 L1BC season. In Part One we looked at the goalkeepers and defenders on the squad. In this part we take a look at the midfielders and the forwards on the squad. Some players will be listed in different positions than some may be used to seeing them in, but we’ve based these positions on what Altitude have the players listed under on their website. 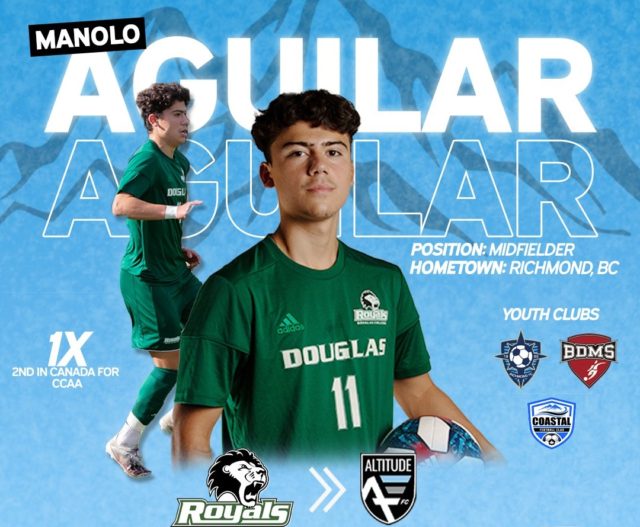 18-year-old midfielder Manolo Aguilar joins Altitude after his first season in the college game where he made four appearances for Douglas Royals in PACWEST, two of them starts, and played for their FVSL Premier team Surrey FC Royals, where he scored one goal in the Pakenham Cup.

His youth career saw him play with Richmond FC and Burnaby District Metro Select before playing in the BCSPL with Coastal FC.

Aguilar primarily plays a central midfielder, but can also play in the defensive and attacking midfielders role. 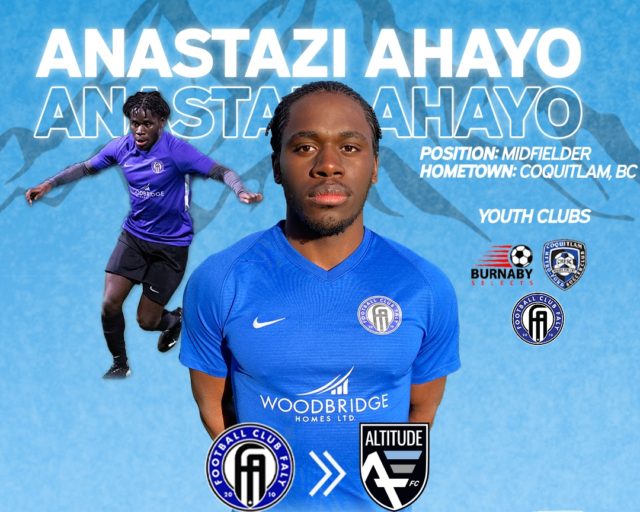 Another homegrown talent, Anastazi Ahayo has been a full time member of the Faly Academy since joining in 2014 from their school program at École des Pionniers, where he played with the Elite and travel teams and trained and competed in France at the Paris World Games for two years.

The 21-year-old was one of four Faly Academy players that had a training spell with FC Metz in September 2018, that saw them play some matches with their U19 side.

Ahayo was the captain of the FC Faly U21 side that won the BC Provincial U21 cup and VMSL U21 title in 2019 and played this past FVSL Premier Division winter season for FC Faly, where he was the joint leading scorer for the club in the league with eight goals, adding another in the Soccer City Cup.

Ahayo played the 2020/21 NPSL season with Philadelphia Lone Star, where he made six appearances, three of them starts, and logged 200 minutes.

In his youth career Ahayo played with Burnaby Selects and then Coquitlam Metro Ford, winning a U15 BC Provincial cup with the latter. 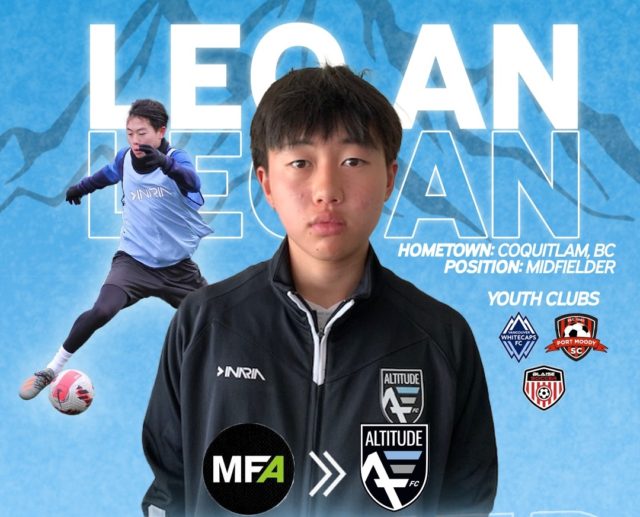 One of the youngest players on the Altitude roster, 17-year-old midfielder Leo An spent his youth career with Port Moody SC, the Blaise Academy, and had some time in the Whitecaps academy system.

An spent the past winter season playing in the FVSL Premier Division with the Micro Footie Academy, scoring two goals in league action this year. 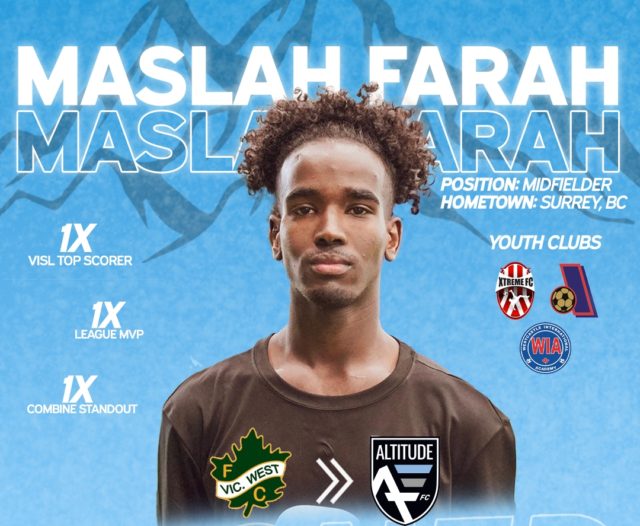 20-year-old midfielder Maslah Farah comes to Altitude FC after playing the 2021/22 VISL season for Vic West FC over on the island, where he scored four goals.

His youth career saw him develop with Alberta sides Xtreme FC and Edmonton Drillers SC, before moving to the island and playing with the Westcastle International Academy. 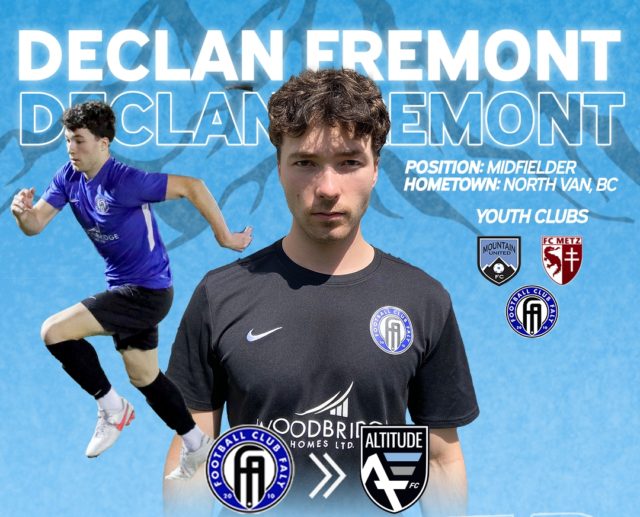 An attacking midfielder, who can also play the DM role, 20-year-old Declan Fremont has been with the Faly Academy for a number of years now after playing for Mountain United in the BCSPL. Fremont was part of the FC Faly side that won the 2019 BC Provincial U21 cup and were the VMSL U21 league champions.

Fremont was one of four Faly Academy players that had a training spell with FC Metz in September 2018, that saw them play some matches with their U19 side.

He played this past winter season in the FVSL Premier with FC Faly, scoring one goal in the Pakenham Cup. 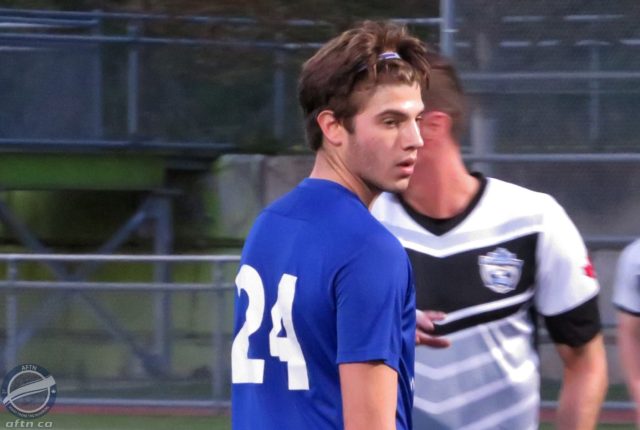 18-year-old midfielder Bernardo P Illoz has been with the Faly Academy for seven years and played this past winter season for FC Faly in the FVSL Premier Division season.

Illoz also played, and impressed, in FC Faly’s run in this year’s Provincial A Cup.

The 6-foot-1 central midfielder is also a keen basketball player. 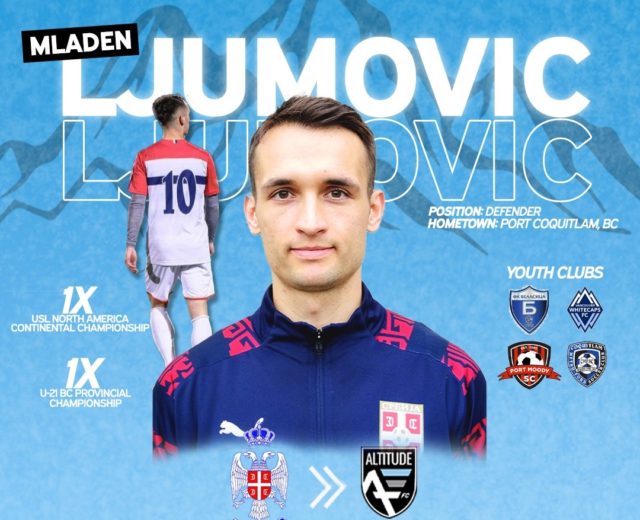 At 30-years-old Mladen Ljumovic is the old, experienced head on the Altitude squad this season and will be expected to be a leader both on the park and in the locker room for this young side.

Moving to Canada from North Macedonia, Ljumovic’s youth career saw him play with Port Moody SC, Mountain United, and Coquitlam Metro Ford, winning the U21 Provincial Cup with the latter in 2010.

Ljumovic started Altitude’s league opener at Rivers FC last weekend and the attacking midfielder will be an important piece for the team this season. 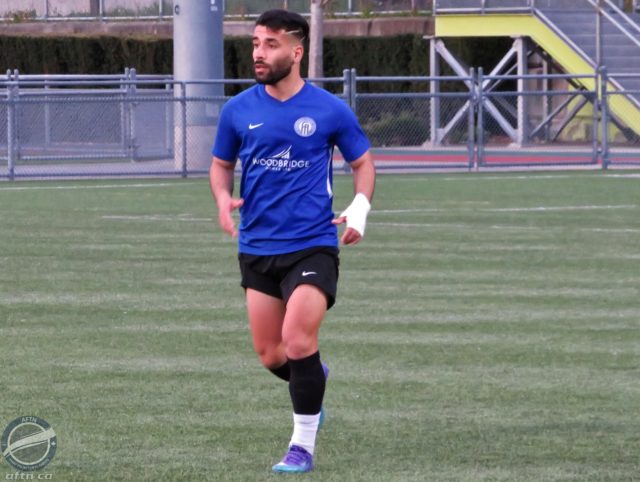 One of the players AFTN have tipped to be a breakout star in L1BC this season, 24-year-old Sairoob Sairoob came through the youth ranks at Coquitlam Metro Ford and has experience playing in the VMSL with Serbia United and EDC.

Primarily a left winger or left midfielder, Sairoob was FC Faly’s leading scorer this past season in the FVSL with 10 goals across all competitions, including eight in Premier Division play.

Sairoob started last week’s inaugural match for Altitude at Rivers FC and was the man tasked with delivering their set pieces. His corner at the end of the first half led to Altiitude’s historic first goal from Brandon Bangambee. 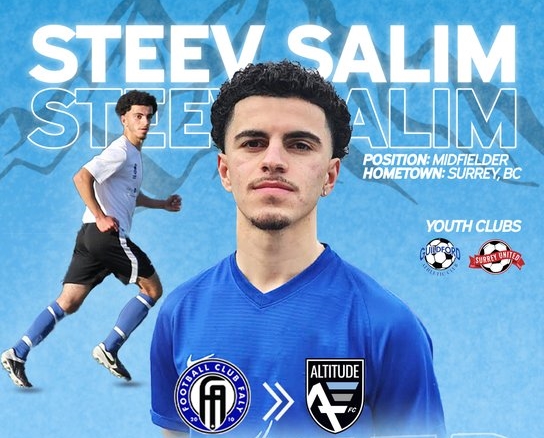 After coming through the youth ranks with Guildford Athletic and Surrey United, 23-year-old winger/wide midfielder Steev Salim made the move to FC Faly, playing with their U21 side in the VMSL.

Salim has been playing the past winter season in the FVSL with FC Faly’s U21 side in Division 2, where he scored two goals, then moving to the Premier side where he scored once. 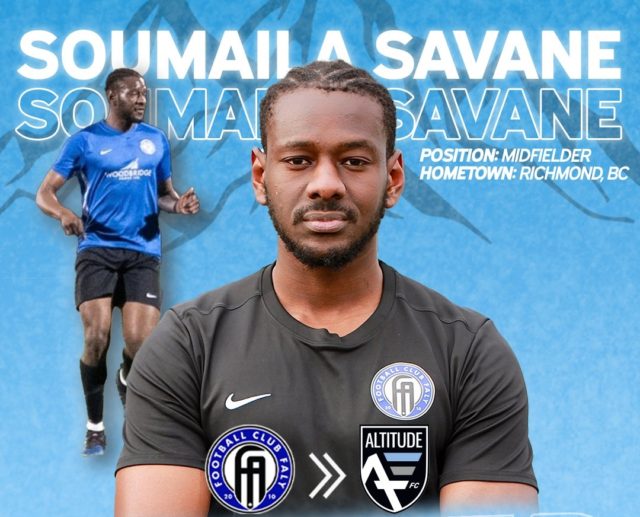 6-foot-3 central midfielder Soumaila Savane doesn’t have a lot of information out there about his soccer career to date, but the 23-year-old played this past winter season for FC Faly in the FVSL Premier Division, scoring one goal. 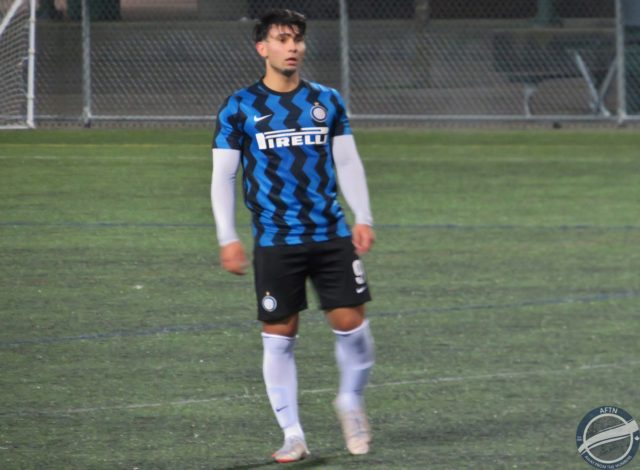 One of the last additions to the Altitude roster, and one of the most exciting, is Massud Habibullah. The talented forward is coming off a very strong season in the VMSL Premier Division with Inter EDC, where he was their leading scorer with 11 goals, nine of them in the league, two of them in the cup, and several of them spectacular solo efforts.

The 19-year-old spent six years in the Vancouver Whitecaps system, joining them in August 2015 and playing for their academy sides from U14 up to U23. A prolific goalscorer, he netted 20 goals in 39 appearances (27 of them starts) for the U17s over two seasons.

Habibullah’s youth career saw him come through the Mountain United system and he has been involved with the Canadian national team at U14, U15, and U17 level.

He was training with Pacific FC this CPL preseason, alongside his brother Kam who is there on loan from the Whitecaps MLS team, and this L1BC season is the ideal opportunity to continue his development and show the CPL sides the talent he clearly has can be replicated at the higher levels. 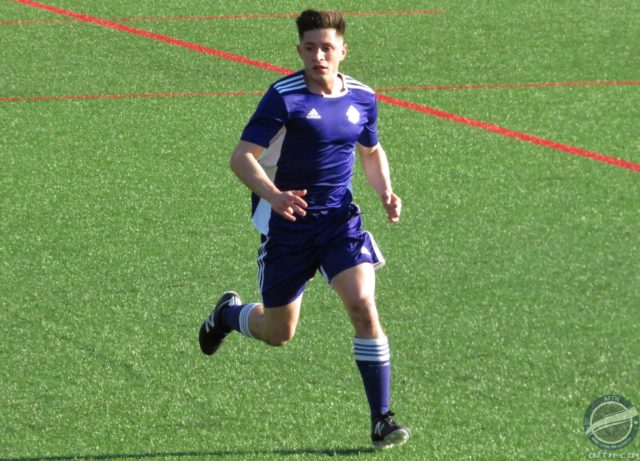 Another fantastic addition to the Altitude attack is three-time BC Player of the Year Connor Hildebrant.

The 25-year-old brings a lot of experience to a young Altitude side, playing his football both here in Canada and over in Europe, where he played for Genoa’s youth academy in Italy, had trials at Ross county and Cheltenham Town, and played Nk Tromijnek and Ns Mura in Slovenia.

Although most commonly seen in an attacking midfielder role, he can also play across any of the three front positions, which is where he was used for Altitude’s season opener last weekend.

A proven goalscorer, Hildebrant spent the past winter season playing for FVSL Premier runners-up Abbotsford United, where he finished second in the Golden Boot race after hitting 21 goals.

Hildebrant played his youth soccer with Langley United and then Surrey United in the BCSPL, winning the U16 Provincial title with the latter in 2012. His play with Surrey saw him become part of the Vancouver Whitecaps Residency program in 2012, joining the U16 set up, but he never played a match at the USSDA level for the team, going over to Italy before heading back to Surrey United, where he ended up playing VMSL Premier with the Firefighters in the 2014/15 season.

Hildebrant then moved to play under his father Rob with Aldergrove United, where he won a FVSL league and cup double and were beaten Provincial Cup finalists in 2017. 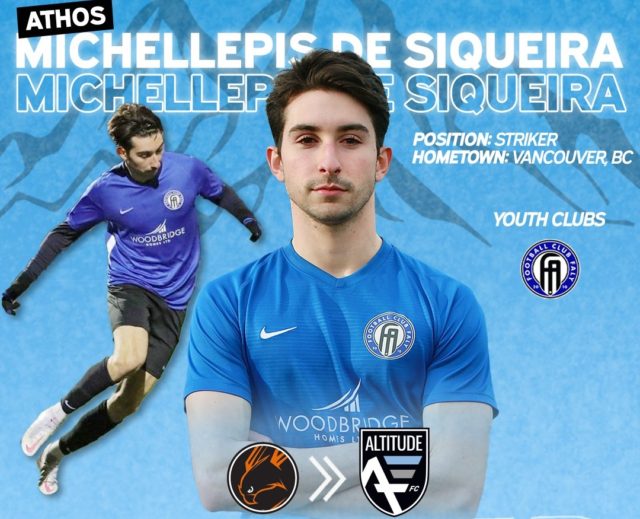 Another product of the Faly Academy, playing at Kinsmen will be like coming home for the former Carson Graham Secondary student.

The 20-year-old, who can play as a striker and in a midfield role, played his first college season with Langara Falcons in PACWEST last fall, scoring three goals in eight appearances.

Once the college season was all wrapped up, De Siqueira headed back to play for FC Faly in the FVSL Premier Division, where he scored nine goals in all competitions and was their joint leading scorer in the league. He’d previously played for Faly in the VMSL. 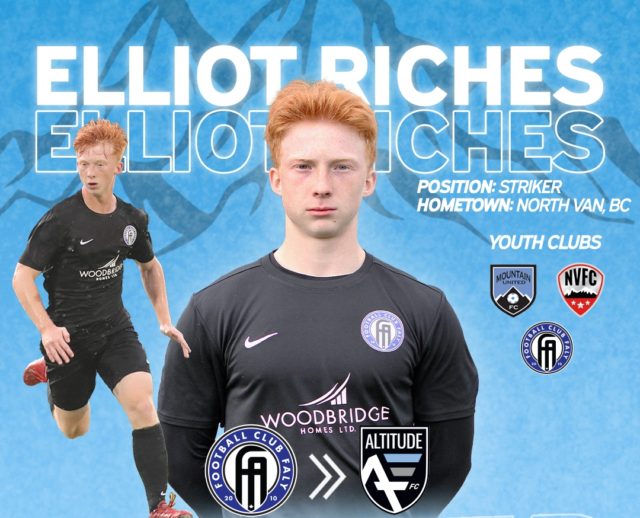 Another one of the youngest players on the Altitude roster, 17-year-old Elliott Riches has been developing with the Faly Academy for eight years now while playing four seasons with North Van FC and two seasons with Mountain United in the BCSPL.

In 2015 Riches was part of a group of NVFC players that travelled to England and Italy for training and matches.