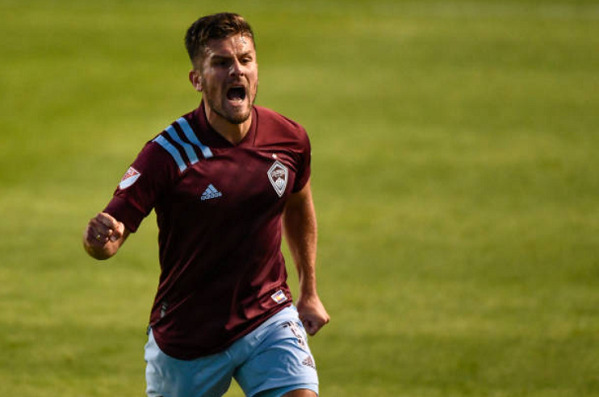 In a match between two teams who have looked most dangerous from their set piece play, it was fitting that a stunning Diego Rubio free kick was all that separated Vancouver Whitecaps and Colorado Rapids in MLS action on Sunday evening in Utah.

Rubio’s 26th minute winner was the decider in a game that needed someone to take it by the scruff of the neck but couldn’t find anyone to do it and lacked quality for much of the match. The defeat prevented the Whitecaps for having their best start to a MLS season.

Marc Dos Santos rang one change to the starting line-up for this one, bringing in Caio Alexandre for his first MLS start, with Michael Baldisimo dropping to the bench after missing part of training this week after picking up a knock.

Colorado brought Sam Vines back into their starting line-up, allowing Kellyn Acosta to move out of the makeshift left back position he’d been occupying and back into his more familiar midfield role.

It was the visitors who came out on the front foot with Andre Shinyashiki forcing Max Crepeau into a point blank save four minutes in.

The Rapids were making all the running, well what there was of it, with the Whitecaps looking a bit lacklustre and struggling too get much going. Crepeau denied Shinyashiki again in the 15th minute, as the Brazilian was getting the better of the ‘Caps defence at every opportunity.

He had another chance to open the scoring for Colorado again minutes later, guiding a header just past the far post after ghosting in unmarked at the back of the box.

The Whitecaps finally responded with a chance of their own in the 21st minute when Deiber Caicedo pounced on a sloppy loose ball from Colorado keeper William Yarbrough, but while the Colombian managed to take the ball past the goalie and make room for a shot, it was poor placement and easily cleared off the line from the recovered Rapids defence.

It was to prove costly as the Rapids finally got the go-ahead goal their play deserved with a stunning free kick from Rubio in the 26th minute. The Chilean hit an unstoppable shot from the edge of the box that gave Max Crepeau no chance in the ‘Caps goal.

Your @MLS Goal of the Week. 😱 pic.twitter.com/TVBTggXABF

As good a free kick as you’re going to see this season.

Lucas Cavallini picked up a booking and survived a look at VAR by Baldomero Toledo for a possible red card offence, as the ‘Caps tried to get back into the game.

Vancouver’s strength this season has been their set piece play and that nearly got them back on level terms in the 41st minute when Cristian Dajome got his head on a Caicedo corner but Yarbrough punched it away off his goalline.

Two close calls for the Whitecaps, but no cigar and the Rapids headed into the break a goal up and will have been the far happier side by their first half performance and the tempo of the match.

Vancouver were hoping for a response akin to their first two games, where they came out after the half time break with an added spring in their steps, and they nearly got it when Cavallini won a head to set Dajome through on goal, but Toledo blew for a free kick against the ‘Caps striker.

Michael Barrios came close to adding a second for Colorado when he curled a long ranger just over five minutes in, but then Vancouver were denied on the line for a third time on the night when Ranko Veselinovic’s header was denied by Yarbrough and the danger was cleared.

The game was going from end to end, and Andy Rose had a big block on Rubio just past the hour mark to keep the ‘Caps just one behind.

Crepeau made another big save in the 73rd minute, coming out to deny Jonathan Lewis, who looked to have been sprung from an offside position, but the flag didn’t go up.

The Whitecaps thought that they had been given a lifeline with 10 minutes remaining when Toledo pointed to the penalty spot after Alexandre went down in the box under the attention of Acosta. But VAR once again got involved and upon review the penalty decision was overturned.

Caicedo nearly sprang Cavallini with four minutes remaining, but Danny Wilson stretched out a crucial foot to deflect the ball away.

But that was to be it for the Whitecaps, and their lack of any real attacking threat was summed up in stoppage time when Caicedo sent a cross into the box with no-one waiting on the other end for it.

It was the first loss of the season for the ‘Caps, which isn’t concerning in itself, but the manner of the defeat was certainly disappointing. The attack just wasn’t clicking, the midfield offered little creativity, and they were lucky not to be punished for some slack defending in the early going.

The second half was certainly more promising, but this was a Colorado team that a fast-paced Austin tore to pieces just the weekend earlier. The opportunity to remain unbeaten was certainly there, the key now is how they regroup from this one with Montreal heading out to Utah for a Canadian derby next weekend.

“Well, I think the first 20 minutes really set the tone on the game and that was disappointing. I think we didn’t start with the ball well, we gave too much space to them, they attacked us a lot with their switch and were dangerous with it. Even if we get a good chance, they still got the goal they deserved based on the first 20 minutes. I still think we created enough to start but it is disappointing because we all wanted to win this game and we wanted to take this opportunity to win this game to get to seven points. Unfortunately, we were short tonight and that’s it. We have to react, we have another important game on Saturday.”

We tried with Caio to get a player in behind the three forwards that would connect with more with them, to connect more with passes in behind and out wide. Caio had to come too deep to get on the ball and Colorado defended lower. We didn’t get around them enough, our crosses weren’t effective enough, we tried to play through the middle but it wasn’t easy.”

“What’s important is that we all understand the process of development and how you can slowly grow. It’s always going to depend on your growth and who plays in front of you. If Kam came in today, it’s because he’s done things in preseason and in training to help the team out. I told Kam the steps of what he has to do to be successful with us. He’s a young player that I’m going to protect. Of course, if he came today it’s because he deserved an opportunity to come in today.”

“The match was open. We had our chances, they had their chances, and unfortunately their goal was the deciding goal, not us.”

On the opening 20 minutes:

“In the first 20 minutes, we were too open, We were stretched, we started to play their game. That was the deciding factor at the end of the game but we have to be stronger going forward.”

On how the team can be better next week:

“The league is a marathon. Win or lose, we always have to learn and become better each game. Next game, we have to be more compact, play better possession, and perform better.”

“It’s a game that we will definitely learn from. That is for sure. The first 15-20 minutes was a little bit too slow, and this is when actually we lose the game, where we can have the lead and we don’t concede the goal. It’s a game that once again, we will learn from, that is for sure, because everyone is disappointed to not get any point out of this one. When I take a step back, we can definitely get some points tonight, and we didn’t, so it’s a game that we need to analyze it and then move forward to Montreal next week.”

On the lone goal:

“It’s a fantastic strike. It is what it is. Great strike. Great goal.”

On the team’s progression:

“I think we are a tight group and we’re doing some progression. We’re making adjustments and doing some progression. Third game into the season, fourth against an MLS side. So we’re still really building on that. So the first three is out of the way, the fourth is coming. The team is having more and more chemistry but we need still to find some passing lane on the ground.

We go over the top a lot in this game and then it becomes a little bit predictable. Once we find those lines on the ground, those angles, it gets more difficult for the other team.”

On the team’s performance:

“That was a really hard fought win. We certainly had some very good moments in the game, created a number of chances. Felt like we need to finish one of the other chances earlier, but great free kick by Diego, and it was a resolute effort as they started piling on more and more pressure. We defended quite well, created some very counter-attacking opportunities. While you could say we would’ve loved to have scored another goal, at the end of the day, [the team] fought hard and earned a win on the road.”

On keeping two clean sheets from two road games in 2021:

“The mentality has been great. They’ve really embraced working hard, defending hard on the road and making the game difficult for the opponent. I think that’s had a lot to do with it. And I think a number of our players in the back part of the field have had good games in both road games. I think Danny [Wilson] has been really good in both games. All the defenders around him have worked really hard. I just think overall our team mentality has been excellent. Today, Kellyn’s [Acosta] work was excellent. Drew [Moor] came in and was solid. Really, I could go through the whole team because it doesn’t happen without the kind of work we get from Diego [Rubio] and Johnny [Lewis] toward the end. Overall, the mentality has been great on the road so far.”

On the transition game from the defence:

“I thought tonight when we won the ball, especially late in the game, the reaction of the players to get forward, certain guys, Vinesy was very good, the guys ahead of the ball were very good, and, as a result, we were able to turn some good defending into some very good chances. I think, again, the mentality you could see was very good throughout the night. They were going to do all the work they needed to to help break up plays, but then immediately could switch gears and get ready to go forward.”

On the team’s first win of the season:

“I think we could’ve scored more goals, but a win is a win. It’s good that we had chances, we just need to finish them, have more of a killer instinct. But it’s good—we won 1-0 away and now it’s time to start winning and at least have this same mentality that we had today in every game.”