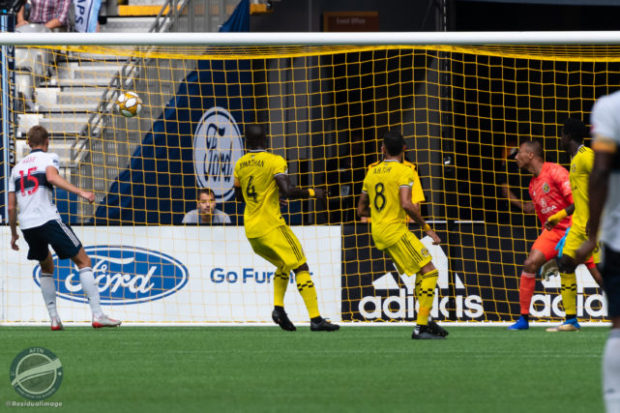 For the second straight week Fredy Montero came on as a sub and provided Vancouver Whitecaps with late match heroics in a 1-1 draw, all but officially eliminating Caleb Porter and his Columbus Crew from playoff contention.

The Colombian’s goal at the death saved the home side from another loss at BC Place, while Gyasi Zardes scored from the spot for Columbus in the first half in a poor game with very little chances and excitement generated by either team. It was the kind of match you’d expect to be served up by two teams that have struggled all season long and that must just be counting down the days till they can hang their boots up for the year.

The Whitecaps were able to create a couple of chances in the opening 10 minutes with both Inbeom Hwang and Russell Teibert forcing Eloy Room into making saves.

MacMath made his own stop in the 17th minute, denying Luis Diaz in a 1-v-1, but unfortunately couldn’t handle the rebound which eventually ended up with him bringing down Pedro Santos in the box as the Portuguese forward tried to round him. 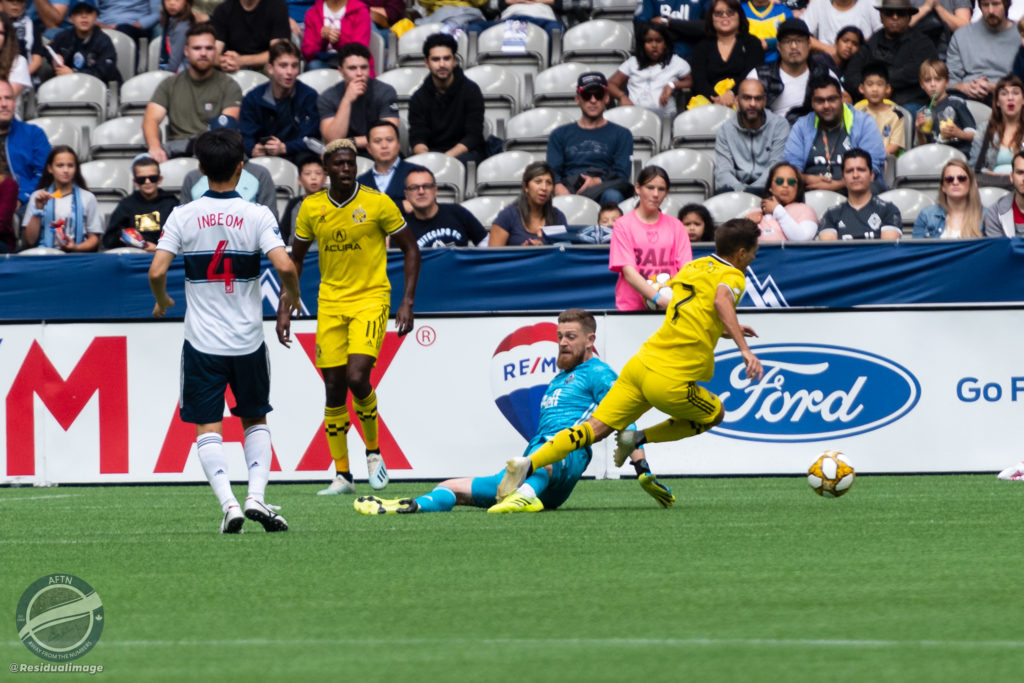 Gyasi Zardes stepped up to the spot and converted the penalty to give the Crew the opening goal.

Four minutes later, Zardes had a chance to get an early brace from in close but this time MacMath was able to make the clean save.

The final chance in the first half came to the Crew when a shot from Diaz was collected by MacMath to take the ‘Caps into the half down a goal and with a lot of work to do to get some spark into their play.

Theo Bair came close in the opening 10 minutes of the second stanza when his shot deflected off a defender, off the post, but into the hands of the keeper with Tosaint Ricketts waiting to pounce.

After a couple of fortuitous bounces, Santos got a clear shot from a tight angle in the box but MacMath was able to close down on the shot to keep the ‘Caps within one.

It looked as though all hope was lost but for the second straight week Montero was able to do it at the death, superbly rising to get his head onto an Ali Adnan cross and direct it past Room to send the remaining people at BC Place into a frenzy. Or at the very least into a ripple of excitement. The numbers may not have merited the frenzy tag.

It wasn’t a great overall performance and felt like the meaningless end of season affair it was for Vancouver. The draw temporarily saw the ‘Caps pull to within three points of moving out of the bottom spot in the Western Conference with two games to go. That wasn’t to last long, however, and Houston’s win sees Vancouver now six points back of the Dynamo and Sporting KC, with a win total meaning they are now officially the Worst in the West this season. A title no-one at the club wanted.

The Whitecaps now focus on their penultimate match of their forgettable 2019 season in eight days, and things aren’t about to get any easier when they go to Southern California to take on Zlatan and the suddenly resurgent LA Galaxy. Never mind. It will all be over soon. 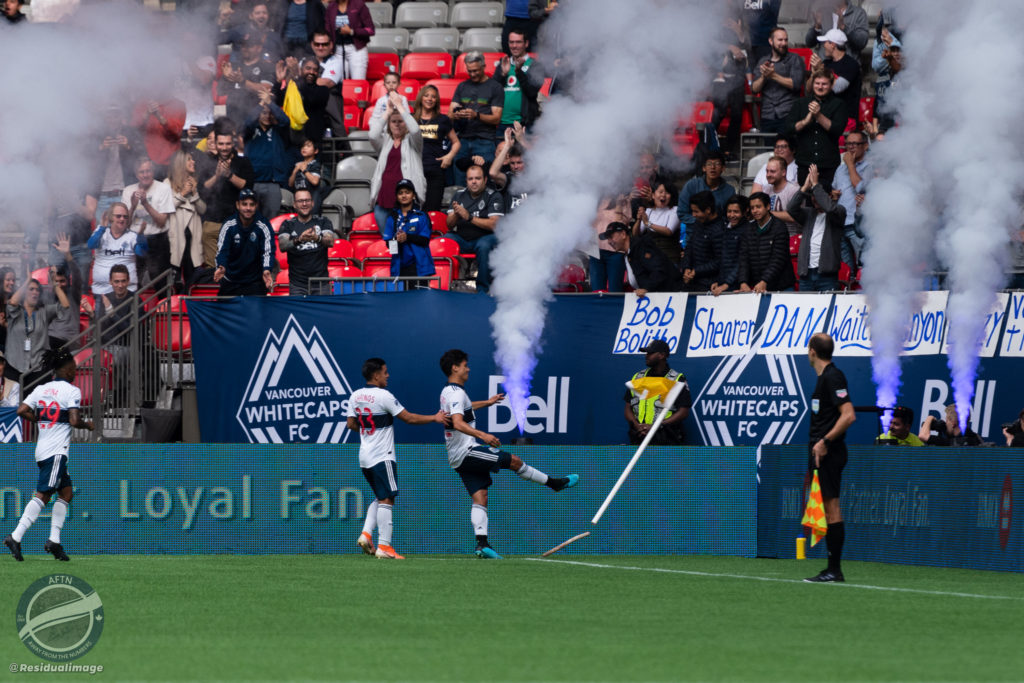 “It’s good. He’s doing a good job. I think the goal was very good, very good cross, very good header. Great finish. I think it was a deserved result in a sense that our team didn’t deserve to lose today. We just got the tying goal late, that’s all.”

On possession in the second half:

“[In] the second half, we had more ball [possession], they weren’t finding Guzman or too much inside. That allowed us to have more of the ball. I thought that we were very unlucky from that play from Theo that had Ricketts involved, hit the post. But again, I think we deserved at least the tie today and it just came very late.”

On how being out of the playoffs is impacting team performance:

“You’re not in the head of the player, so it could be a good general comment, saying that they’re “looser”; that’s why. I think there are things tactically that we did since the game of Montreal that has the foundations of what we want to be moving forward. And once we got out of the playoffs, we said we need to stick and keep working on the foundations of how we’re going to build the team. And little things, tactically, that have happened have allowed us to be more in the opponent’s half, have allowed us to defend higher on the pitch, allowed us to have a little bit more possession, and I think that’s what’s “loosening” up the team.”

On scoring goals at the death two weeks in a row:

“That’s soccer. During my whole career, I learned that you need to keep working. I am a type of forward that I need the ball into the box, that’s [how] I can show my best. And the last two games, there was only one play each game [where] I felt confident enough to score those goals.”

On his season overall:

On the team’s winning mentality ahead of next season:

“It’s a match that we definitely showed that we’re not going to give up until the very last second, and you saw that tonight. The team’s relentless and we got deservingly a draw tonight, and that’s important to our team.”

On the team’s performance in the midfield:

“I thought the first 20 minutes of the game, we played very well. We possessed the ball, we were dangerous, and I think we got to some very good spots tonight. I think we just need a little bit more quality in the final third, like how we showed in the final seconds with Ali’s cross and Fredy’s finish. We need to capitalize on those chances when we get into the final third and it’ll relieve some pressure on the team.”

On playing with Hwang, Adnan, and the rest of the team:

“First and foremost, [Inbeom] is a good friend of mine. I enjoy all week long when we train together and the lead-up to the game. And the game, we have fun playing together. It’s a good relationship that we have with the group of guys. He’s shown his quality all season long, he’s a fantastic player … [Ali], again another very good friend of mine. Both guys, I have a good relationship with, and I enjoy being around those guys; when on the field, off the field, during training, on the pitch or in the game. When we’re around each other, there’s always a smile on our face … you really enjoy playing with your friends and those friends are fortunately my teammates.”

“It’s really disappointing. The season was on the line, we’re up 1-0, 10 seconds to go. We need to put the ball in the stands. These are simple things that you have to do to win games; we do the wrong things and it’s cost us this season, honestly. If we could see out a game this year we’d be in the playoffs.”

On if it felt like a step back after recent positive form:

“Obviously you saw their team, they were a bit lifeless. The game was there for us to easily run away with if we’re sharp and we’re urgent. We got the first goal and we started just playing not to lose. We didn’t play to score the second goal, psychology changed. Any time we went forward we could have scored a goal, honestly, and we didn’t. What do you say? At the very least we should have seen the game out. I mean the game was done, the referees were waiting to blow the whistle, we have to put the ball in the stands, we have to foul, we have to put pressure on the cross, we have to obviously pick up one of the most lethal strikers in the league – always has been – and we don’t do any of those things. It’s not the first game, and to be honest with you I just thought overall we should have played better, especially against a team that really had nothing to play for.”

On thoughts of playing at BC Place after being with the Timbers:

“All I thought about was prolonging our season. We needed three points to push us into next week and we didn’t get it done. The game was there for the taking and we just weren’t aggressive or urgent enough after we scored the goal. It’s disappointing. I’ve seen this type of game happen quite a bit, it’s just disappointing that it’s happened to us so many times.”

“It was really tough because it’s the last minute of the game, and it happened before already. I’m just sorry for the effort we did. We didn’t play our best game, but I also think we have to win this game. We were the better team, and if you concede this goal at the end it’s really tough.”

On a step back after recent positive form:

“I think so, because we want to go in the playoffs. If you lose these points it’s really difficult. Other games we had the same result at the end, that we draw the game or didn’t win. It has to be a lesson for us, but we still make the same mistakes. It’s too bad because we had a good stretch, which is sad, and good games. We played a good game last week also, and we had to win today, but I think we have to learn from it and it’s a hard lesson. How we played the last 15 minutes of the game, we didn’t deserve to go into the playoffs like that.”

On looking towards the future:

“We have to level up if we want to compete with the other big teams, to level up and not concede goals like this. It’s not possible if you want to play at this high level. We have to learn from it.”

On how this changes the mindset of the team:

“We’re still going to keep going. We’ve still got two games to go. Even though we were hoping to win this game to keep the playoffs alive. It’s just disappointing and unfortunate for us. We can only go home and make our fans proud again.”

On still having a small chance at the playoffs:

“We have a whole week to prepare for our next game. This game is over, so once again it’s a lesson and we put it behind us and go again.”

On what’s left to prove: