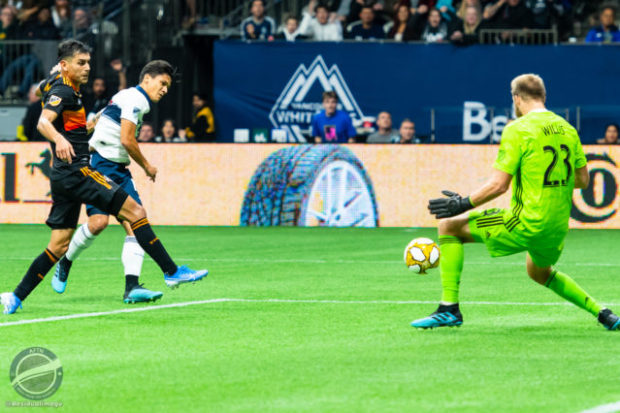 Inbeom Hwang had fired the Whitecaps ahead from the spot early in the second after a goalless first half, only for Mauro Manotas to pounce on a Zac MacMath howler to tie things up with 12 minutes remaining. That then set the scene for Montero to pounce and fire home a last minute winner to give Vancouver a rare home victory.

Each team had an attempt in the opening five minutes as Tommy McNamara missed his shot from the center of the box while Michaell Chirinos had his shot from tight angle saved.

The ‘Caps had another shot from in close and tight with Ali Adnan being the one to be denied this time by Joe Willis.

MacMath made a couple of stops just after the half hour mark with both McNamara and Christian Ramirez unable to beat the keeper to keep the match scoreless going into the half.

Five minutes into the second half, the Whitecaps got a break when Manotas was judged to have handled the ball while defending in the wall from a fierce free kick. The ball was hit at force straight into his midriff and after a four minute delay that included a VAR review, referee Robert Sibiga stuck by his original decision and Vancouver had a penalty.

Hwang stepped up to convert the penalty and celebrate with the crowd, even eating some popcorn along the way.

GO GET YOURSELF SOME 🍿

Hwang was perhaps lucky not to pick up a booking for jumping over the advertising boards after scoring and leaving the field of play. Fortunate for him, as he then picked up a booking 12 minutes later.

Vancouver had a chance to go up by two when Adnan broke into the box and squared a ball into the box which was missed by Tosaint Ricketts for an easy tap in, much to the frustration of the Iraqi international.

As is so often the case, it was a miss that would cost the home side in the 78th minute when Manotas took advantage of a horrendous spill from MacMath and quickly pounced on the ball finishing from two yards out.

MacMath was saved from being branded the villain of the hour when Montero, on as a sub, converted a pass from Theo Bair inside the box to bury the winner under Willis in the last minute, much to the clear relief of the Colombian.

There was still time for some late drama and MacMath made amends for his earlier mistake by coming up with a clutch save to deny Memo Rodriguez deep into the stoppage time and secure a much needed morale boosting victory for Vancouver.

The win saw the ‘Caps finally overtake their 2011 points and win total, saving the current squad from the ignominy of being the worst Whitecaps side of the MLS era. It’s the small victories you take these days.

The Whitecaps will return to BC Place next Saturday as they host former Timbers coach Caleb Porter and his Columbus Crew. Marc Dos Santos wanted his team to finish the season strongly and they have another excellent chance to pick up three points against a team whose playoff hopes are hanging by a thread. 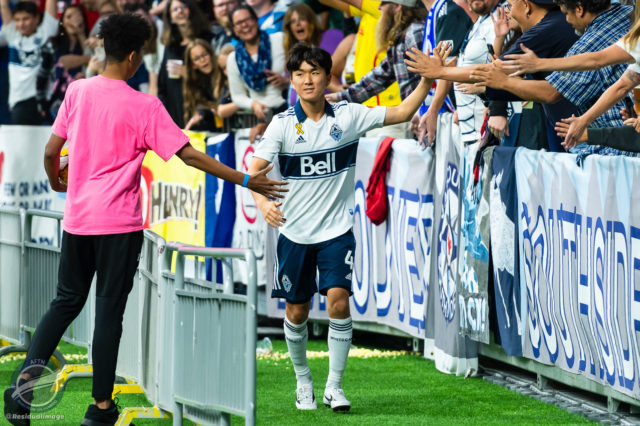 “Overall, because of the 90 minutes, I think we deserve the three points. This week, the thing we spoke the most about [was] what are the reasons we play for when you have four games to play and there’s no playoffs. You play for your teammates and for the group that is [training] every day. You play for sponsors, for the club that pays you, for the club that brought you in and believes in you. You play for the fans that, even [when] knocked out, still come in and buy tickets and support the team and follow the team. We have a lot to play for. That’s the right mentality to have.”

“It’s changing the game. Am I for VAR? Yes, but limited things. What’s changing is those goals. When I was a kid and you’d [see] players scoring, taking off their jersey, running in the crowd. Now, you score and there’s always suspense. The crowd gets up [in a] good-environment goal, then there’s suspense. That’s killing the game. It’s sad. The rule is clear and obvious. If there’s a little bit of a doubt and you call it, I think you stay with the call. There’s a lot work to do in that part of the game.”

On substitutions late in the game:

“It depends on how the flow of the game goes. We were looking at some players that we were thinking that we need to do a [substitution]. We just waited a little bit. For Fredy and Theo, it could have happened earlier, but not that earlier, maybe after 65’. For Lass [and] the last sub … when you see five minutes on the board, [and] you have a third sub, the team was well on the field and we felt we could use the last as more of a tactical substitution, so that’s what we did.”

“The fans were fantastic, especially when we went 1-0 up. It was an absolute pleasure playing in front of them. What a great way to end the game. Overall, I think we deserved to win. We came close to making it 2-0. It was a real test of character. And to a man, everyone worked so hard, stuck to our principles. I thought we were very sound defensively.”

On the response to going ahead 1-0:

“It can be natural for teams, after you go 1-0 up, to drop back a little bit. It’s a little bit of mentality. Then as a unit, as a team, we need to grow and understand that when we go 1-0 up, especially it was still early in the second half, we still were finding a lot of success especially through midfield, through switches of play. We kept the ball well in the first half, and that’s why we deserved the second goal. It’s important no matter what moment in the game, what the scoreline is, we stick to it. In those moments, we need to grow and mature and understand that we need to keep playing the same way.”

On playing different positions throughout the season:

“You’ll never find me complaining about being versatile. For some players, they don’t like it, they’d rather stick to one position. For me, I’ve built a career on being a team-first player. I understand that you need guys like that to step in throughout the season and play a different role. I take a lot of pride in being able to do that. I’ve always wanted to give my best and I always want to be on the pitch. It doesn’t matter where I am. I feel like I’ve gotten a good understanding of this role. To be honest, this is the first season where I’ve played games at centre back. I’ve enjoyed that role as well, back-three, back-four. I enjoy that for sure.”

On adjustments following the first goal:

“It was a solid overall team performance. We did very well up until the first goal we scored. If you are a team that have won five of the last seven games, and you have that belief and confidence, then it’s kind of easy to deal with. There’s a little bit of that uncertainty within the team. When you go 1-0 up, you try to hold it, try to keep it. It’s something we need to do better with. We need to be able to do that when we score the first goal in order to get the second goal. There was a 10-minute period where we did drop too far back and kind of invite them to press us. But other than that, it was great, and it was great we got that second goal from Fredy.”

On the conversation after conceding a goal:

“Not much, really, it goes by quick. But we needed to regroup, and we knew if we were to continue that mindset and that kind of defensive, and sit back, it’s a matter of time until they score the second. We did try to step it up a little bit. I think we did that. I think we reacted pretty good to it in a difficult situation. I think we regrouped and battled back and worked hard to get that win.”

On mindset for the remainder of the season:

“If you ask anyone, at the end of the day, it’s our profession. The fans have given us so much over the course of the season. We need to repay them. Of course, it’s a little too late for that. We’ve got three more games to give everything and repay what they’ve shown us over the course of the season. It’s our profession, we need to work at it. It’s not always easy. There’s a lot of pride on the line. Everybody wants to win.” 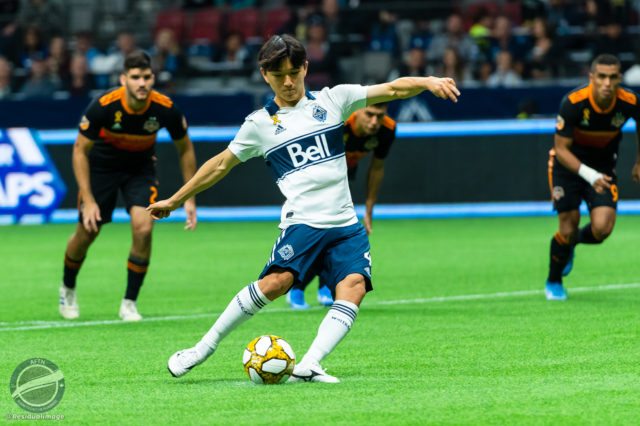 “We put in a good enough performance to get at least one point from here, but then we lack a little bit of efficiency in the offensive part of the field. Also, we need to be much more aggressive defensively and be able to keep a clean sheet. But I think we collectively defended pretty well, didn’t have that many chances to get a penalty, which I think is really a tough situation … We have to keep building, we believe in ourselves. Even though it’s hard right now, we have to keep moving, keep pushing each other, always head up and look forward.”

“We all knew that the performance was there, it’s just that we were lack in [a] different part of the game. But like I said, we can’t let this affect us anymore. There’s a new game next week, so like I said, there’s another game and you can always move forward. We have to take the positives of this game, keep learning and keep moving forward.”

On coaching change and journey to the playoffs:

“There’s been some challenges this season obviously, but I think that what we’re trying to do is develop the group and develop the team. I think that the coach that is coming in after everything’s that’s changed is doing a great job to get us back on track, get us to put everything behind us and look forward. We take every day as a chance to get better, a chance to grow as a team, and they’ve done a great job of doing that … We’ll never stop believing in ourselves, in the team, in the club … we just need to keep working harder.”