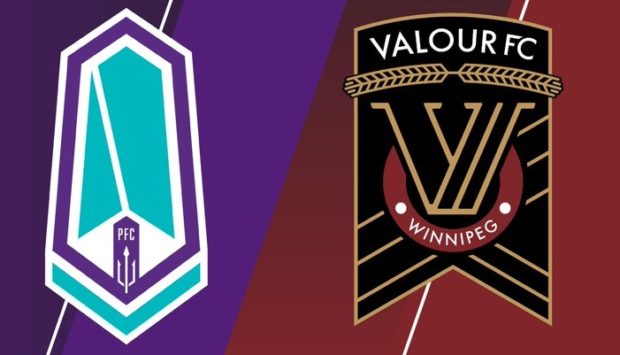 At some stage soon we’re going to have a match where we don’t write that history was made in the Canadian Premier League. Probably. It’s a first year, so who knows what firsts will be set. Wednesday night at Westhills Stadium in Langford was no exception to the ever increasing list of firsts in the league.

We had the first match for Valour FC, their first victory, and Pacific FC’s first loss with the 2-1 final score. Stephen Hoyle wrote his name into the history books with the first ever goal for the Winnipeg side midway through the first half, before Whitecaps Residency alumni Jose Hernandez tied things up just before the interval. Then local lad Dylan Carreiro became the club’s first ever match winner when he rifled home a shot from the edge of the box 12 minutes from time to secure all three points.

At the end of it all, Valour fly back to Winnipeg to prepare for their home opener on Saturday in fine spirits, while Pacific are left licking their wounds and wondering how on earth they didn’t come away from this one with something after the number of chances they created, especially in the second half.

Pacific were looking to build on Sunday’s victory over Halifax but with an injury to their German matchwinner Hendrik Starostzik and the suspension of Lukas MacNaughton following his second half sending off against the Wanderers, the home side had to take to the pitch missing both of their first choice centre backs against a fired up Valour FC side looking to get their CPL era off to a successful start.

The action was fast paced and end to end, with Pacific coming closest in the early opportunities but unable to find the killer touch in front of goal.

And they were punished for those missed chances when Hoyle fired Valour into a 23rd minute lead after Pacific keeper Mark Village was drawn off his line to chase down the ball and Hoyle had an easy tap in in front of an empty net.

Tonight's current mood brought to you by @sghoyle92

Replays showed that Valour’s Michael Petrasso was in an offside position as the first shot came in on goal, but the Winnipeg side certainly care about that. A goal’s a goal.

Pacific pushed hard for the equaliser and they finally got it a minute before half time when Hernandez nodded home a deflected Ben Fisk shot that sat beautifully for him about 12 yards out in front of goal.

But that wasn’t it for the first half action, as Pacific nearly went ahead moments later, but Marcus Haber couldn’t only watch on in disbelief as he hit the post two – one from a header and then his shot from the rebound.

Marcus Haber up early for miss of the season in #CanPL with the double post. pic.twitter.com/G044Meaalk

Valour started the second half the stronger but Pacific soon took over creating a number of chances and coming ever so close on a couple of free kicks.

But again, those missed opportunities proved costly and the visitors re-took the lead with 12 minutes remaining on a wonderful strike from Carreiro.

Valour’s first pick in the U Sport draft picked the ball up on the edge of the box, took a touch inside to take him away from the defender and make some room for the shot, then rifled a beauty past Village into the top left corner of the net.

Sheer joy for the Winnipeg native and all connected with Valour FC.

Pacific tried to throw everything they had left at Valour to salvage a point, but there was no way past the visiting defence and the Winnipeggers held on a famous victory and hand the islanders their first defeat.

It was another entertaining game, just a shame that it wasn’t on TV for a wider viewing. Pacific now get a rest after a busy few days, and will be the only CPL side not in action this weekend. Valour now head home for their home opener on Saturday against FC Edmonton, riding the high of this victory in what looks set to be a bumper crowd.

On having enough chances to win the match

“We probably didn’t have our best 20, 25 minutes, but after that I felt that we created chances and more than enough to get something away from the game. Who knows, if the referee had called that penalty that I see as a clear penalty.”

“We tried to have a little bit of rotation and Jose got in. He was fighting and trying to get into some dangerous areas. I’m happy for him that he got his first goal here.”

“Look, he’s there. It’s just a matter of time before he puts one in. He’s there, maybe a little bit unlucky, but he’s still fighting and without him today we’d have had lots more problems. He played a good game.”

What do you tell a striker after a missed chance like that?

Was he happy with energy levels after quick turnaround of matches?

“I don’t think we can ask for more. I think they did absolutely everything they could. We knew going in to this that it was going to be really difficult getting everyone to 100% and then with the program being as it is with a game after three days. They did a good job recovering and put in a good effort.”

“I feel that I can trust all my squad. I wasn’t nervous putting in any of the guys. I trust everyone in the squad and I’ll put everybody in that’s ready and shows me that they want to play.”

Thoughts on the second half performance

“I felt we were equal to Valour except for maybe the first five minutes of the second half. Other than that I felt we had an awful lot of good situations and we were really unlucky that we didn’t get one more in.”

Thoughts on the game

“Good football game. I really liked from about 10 minutes to 35 in the first half when we started to play. We had good possession in the attacking half and were switching the ball and kind of sticking to the gameplan. It got a little bit scrappy towards the end of the first half and when we’re conceding set pieces and defending into the wind, they’re going to come at us. There was a little bit of pressure there. Tyson had to made a good save from big Marcus and then I thought we were super unfortunate on the goal. I thought we defended it well. It’s hit Jordan [Murrell] then popped up. A bit of a lucky deflection, but then three minutes later we were very fortunate not to concede again. Going in a half time at 2-1, we’d have had to rebuild.

But the one thing we said, as the game goes on, and we’ve got quite a few experienced lads in the dressing room, just be patient, move the ball, and chances will come. They had to play Sunday and now Wednesday night. It’s not easy and they’re young lads, so we just wanted to keep moving the ball, keep working it, and trust that our opportunities would come. Fortunately we know that Dylan Carreiro is excellent when he gets in and around those goalscoring areas, and with the wind at his back as soon as he shaped up I thought he was going to score. I’ve seen him do that 50 odd times in his lifetime.”

Knowing they had the wind behind them in the second half

“Sometimes it’s not an advantage because we’re a football team and we can play well into the wind. We like to keep it on the ground, but the advantage is when the other team is going direct to a target man, the second ball, so you can step in and you saw that. The midfield was winning the battles in the second half, so when we won those second balls and get on the front foot, I think for the most part we controlled possession. We just had to be careful with transitions and set pieces because they’re very, very dangerous.”

What has he seen from the first three CPL matches?

“I knew it was going to be excellent. I’ve coached these young lads and I’ve just said to [the Pacific] boys at the end there, Kadin [Chung], Baldi [Matthew Baldisimo], I’m so proud of them and how they’re getting in and playing and they’re leading this team at young, young ages. It’s fantastic for Canadian football. All three games, both teams tried to play in the right way. It’s been competitive. There’s only one goal separating games at the moment, so you can see that parity, you can see that quality. I think the fans are enjoying the spectacle. As a Canadian who’s seen a lot of these [guys] grow up, I was super proud just to see them all out on the field and going toe to toe for 90 minutes.”

With the first game now done and dusted, how excited is he to now go home and play their first match in Winnipeg?

“We’re looking forward to it. We know we’re going to get a good crowd, we think we’re going to be into double digits in the thousands there, which is excellent. The Manitoba people, they love their sports teams. They also support their own. We’ve said it before, we’ve seven local lads in the team, so just to have those home colours, sound, feel, and really enjoy the occasions. This is a good start for us but we know it’s nothing more than that. To make it a great start we’ve got to go and perform at home, and as you’ve seen here today, you’ve got a quick recovery. We’ve also got to fly early morning. We were up at 5am yesterday, which is 3am here. We’ve had to play at 10pm our time tonight. So when we’re talking tired, there’s different types of tired with travel and flights and sleep. But all credit to our boys. When you can move the ball and keep possession, you can save some of those legs, so hopefully we can do that at home.”

“I’m very lucky that way, but I’ve got to give all credit to Pacific here and bringing that west coast talent together and having that true identity. It’s so nice to see Nolan [Wirth] and [Ben] Fisky and all these boys to take leadership roles. Honestly, it’s fantastic. I’m happy to win, but I was super happy to see young Canadians out there doing their job and leading this team out here. I think they’ve got a great future ahead of them if they stick together.”

What was his half time message?

“Just to manage the minutes and keep the midfield and keep them in front of us. We didn’t want it to become a transitional game. We know we had to win second balls and to control possession in their half, and if we can do that, we know we’ve got good attacking qualities. We had to have the right balance. Midfield, get it around it. Use the wind in the right way because long balls are not going to be effective. Play our brand of football that we want to keep pushing and keep promoting. Then hopefully the chances will fall, which luckily they did.”