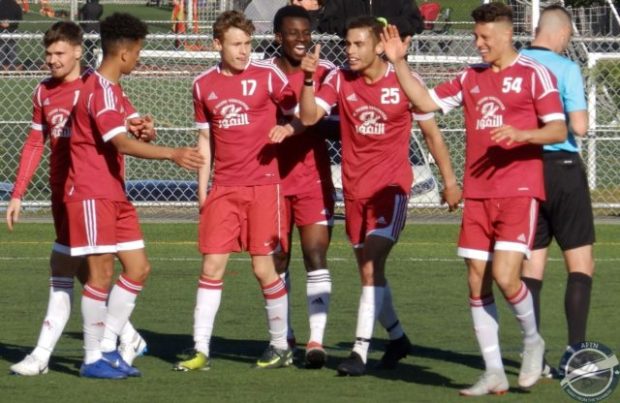 The Vancouver Metro Soccer League’s dominance in the BC Provincial A Cup looks set to continue, with fivepeat Vancouver Island Soccer League champs Cowichan FC now the only remaining team that stands between another VMSL name being etched on the famous old trophy.

Last weekend’s four A Cup quarter-finals produced their fair share of late drama, comebacks, and heroics. The end result saw three VMSL sides advance to the semis, including defending champions BCT Rovers Tigers United, who appear to have refound their form of last year at just the right time.

And it was the Surrey side who kicked off the action at Cloverdale Athletic Park on Friday night, putting in an assured performance to comfortably see off the challenge of FVSL side Abbotsford United 3-0 thanks to goals from Nick Soolsma, Pavi Dhillon, and Cam Hundal.

They’ll now meet their fellow VMSL Tigers, of the Rino’s variety, this Saturday on the Point Grey Turf (kick off 4pm) in what should be a cracking semi-final encounter.

Rino’s battled their way through to the last four in a cracking end to end clash with VMSL champions Croatia SC at Burnaby Lake on Saturday afternoon, that saw both teams have their chances to advance before a late goal and a goalkeeping error saw the Tigers go through with the narrowest of 1-0 victories. 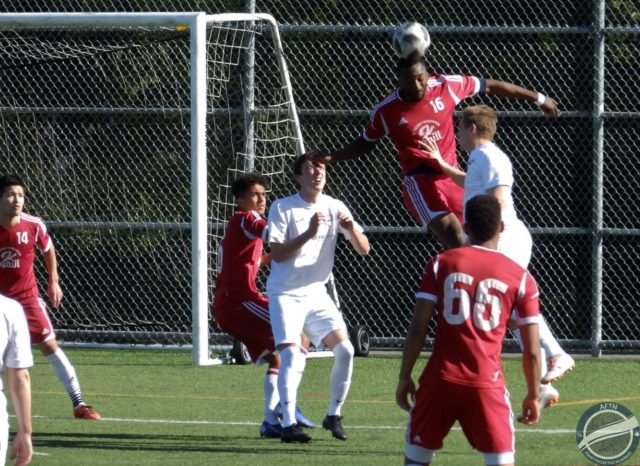 With the game kicking off at 4pm, we only managed to get there in time for the tail end of the first half in this one due to taking in the Whitecaps draw at BC Place, but that was enough time to see Croatia’s David Malamura force a sprawling save from Brandon Waston in the closing minutes of the half, in a game that looked to have Rino’s controlling possession as they moved the ball out from the back and Croatia seemingly happy to let them have that and try and hit on the break with their pacey attack.

That was how the action continued after half time, with both teams moving the ball well and having chances to take the lead.

Rino’s almost struck first, but in the end were only able to hit the crossbar through Declan Rodriguez’s effort on the hour mark.

Croatia came roaring back and thought they had taken the lead in the 67th minute when they headed home from close range, but the linesman had his flag up for offside.

Their luck wasn’t about to improve and they crashed a shot off the bar with 15 minutes remaining, as the action raged from end to end, but then, with extra time looming, Rino’s finally found the breakthrough.

Kristian Yli-Hietanen was played in with three minutes remaining, running in on goal and slipping the ball through the legs of the onrushing Croatia keeper and into the empty net.

Late drama and a late victory for Rino’s, making up in part for Croatia’s stoppage time winner a couple of weeks ago in league action that ended Rino’s title hopes and secured the VMSL championship for Croatia in the process.

There was still time for Croatia to hit the woodwork again in the closing moments as they pushed hard for the equaliser, but they couldn’t find the tying goal and Rino’s saw out their 1-0 win to set up a date with the defending A Cup champs this weekend.

You can see our second half highlights from the match, including the goal, in the video below.

In the top half of the draw, CCB LFC United made it a trio of VMSL sides in the semi-finals with what ended up being a hard fought win at FVSL champions Port Moody Gunners on Saturday afternoon.

It was looking like a comfortable day at the office for the Surrey side as goals from Mamadi Camara, back in the CCB fold after being drafted by San Jose Earthquakes and a trial with CPL side Pacific FC, Milad Mehrabi, and Caleb Clarke had them three goals up and coasting with 20 minutes to play.

When Port Moody earned, then missed, a penalty, it looked like that was their day over, but full credit to the FVSL side who came roaring back with two late goals to make a game of it. They couldn’t find the crucial third to complete the comeback and CCB advanced to secure a trip to the island this coming weekend, their second so far in this year’s competition.

Perhaps good practice for them as this year’s Provincial Cup final takes place at Nanaimo’s Merle Logan Park on Sunday May 12th and the island still has a great chance of securing a representative in it, which would certainly be a massive boost for the crowd on the day.

Five time straight VISL champions Cowichan FC are the last remaining team that the island are pinning their hopes for success on after they got past FVSL runners-up Coastal FC 3-1 in their quarter-final match up in Duncan on Sunday.

Cowichan were the better team from the start and deservedly took the lead in the closing minutes of the first half through a long range Craig Gorman effort. That lead was doubled midway through the second half when Gorman hit home from the spot to grab his own second and put the home side 2-0 up with 24 minutes to play.

Coastal pulled one back with 16 minutes remaining, but any Cowichan nerves were quickly dispelled when Jesse Winter restored their two goal lead with a header a couple of minutes later.

That was it for the scoring and Cowichan advanced with a 3-1 victory, setting up what should be a fantastic semi-final clash with CCB at Duncan’s Sherman Road Turf at noon on Sunday.