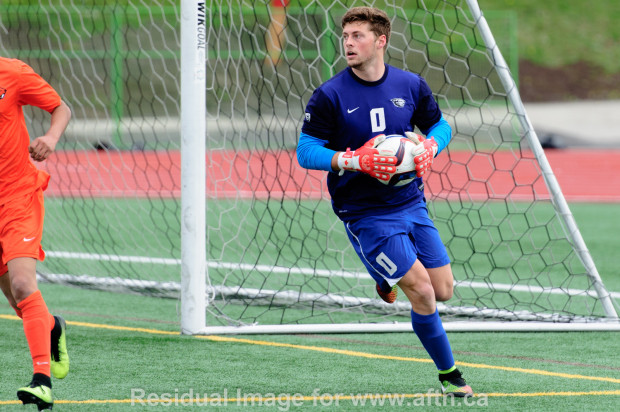 Vancouver Whitecaps have produced a plethora of young talent through their Residency program in recent years, with a league-leading eight homegrown players currently on their MLS roster.

Add to that number the many others playing for WFC2, overseas or at college in the US and it’s an impressive production line of talent.

The most headline grabbing talent may have come from the midfield and forward positions, but when it comes to strength in depth and numbers, that lies with the goalkeepers.

The amount of quality keepers to have come through the Whitecaps Residency in the past couple of years is phenomenal. From Marco Carducci on the MLS squad to Callum Irving and Sean Melvin in the college ranks, it’s felt like every season one or two more top goalkeepers can be added to the list.

And it’s no different this season, with William Diaz in the U18s and Canadian youth internationals Aidan Aylward and Luciano Trasolini in the U16’s.

It’s certainly a testament to the Whitecaps scouting network, development and hard work from goalkeeping coach Raegyn Hall over the years.

Another member of the Residency goalkeeping alumni is Nolan Wirth.

Wirth graduated from the Whitecaps Residency program last summer, having joined the program in 2011. With many USSDA and PDL games now behind him, he headed to Oregon State University.

Initially sharing starts in his rookie year with Junior keeper Matt Bersano, Wirth played five games, four of them starts. Despite winning three games, allowing just three goals and keeping two clean sheets, the Beavers coach decided to stick with the more experienced Bersano for the remainder of the season.

It’s hard to knock that decision as the Beavers made it to the postseason for the first time since 2003 but with Wirth used to splitting time with the Residency teams these past few years, and seeing regular gametime, being completely kept on the bench for the remainder of the season must have been a bit of an adjustment.

Still, that’s the life of college soccer, so onwards and upwards.

Bersano has now moved on from Oregon, turning down a pro contract with RSL’s USL side Real Monarchs to go to grad school at Penn State. His departure will hopefully open more doors and opportunities for Wirth with the Beavers in his sophomore season.

He has a great chance to establish himself now as Oregon’s number one keeper and the signs during OSU’s spring schedule seemed to indicate he would be.

“I’m looking very positive for that looking ahead,” Wirth told AFTN recently. “Hopefully I’m going to be the guy and we can make it to the tournament again.”

With just 405 minutes of action logged last year at Oregon, Wirth made the decision to keep himself busy, fit and sharp during the college offseason by heading back to play some PDL this summer.

With the Caps U23’s team no more, Wirth has headed east to join Calgary Foothills in their inaugural PDL season, where he’s splitting the goalkeeping duties with fellow Whitecaps Residency alumni, Sean Melvin.

There’s a couple of other Caps connections too, with Residency graduate Tim Hickson and Sam Adekugbe’s brother Elijah also on the Foothills roster.

When we spoke with Nolan a couple of months ago, the original plan was to play with Vancouver Victory in Washington’s Evergreen League, but he’s made one appearance for Calgary so far, in last Sunday’s 2-2 draw with Washington Crossfire.

“It’s just to get some more game time,” Wirth told us back in March. “But in the summer I will be training with the Whitecaps again and then going whenever I’m able to get some time in, just for game time.”

Wirth was recently back in Vancouver, playing in goal for the Beavers in March’s friendly between OSU and WFC2. Oregon were on the wrong end of a 3-2 defeat that day but for Wirth, it was just nice to be back and catch up with some old friends.

“It felt good,” he told us. “It felt good to come back to where I started. I obviously know a handful of the guys on the WFC2 team, so that always just gets me riled up to play because you want to play against your friends that you grew up with.”

And a lot of those friends have also been his teammates on the Canadian national team these past few years.

Wirth was one of nine Whitecaps Residency products on Canada’s 20-man roster for the 2015 CONCACAF U-20 Championship in Jamaica in January.

Canada may not have had much success in what were the qualifiers for the recent U-20 World Cup in New Zealand, crashing out in the group stages after a strong start, but on a personal level, the tournament was a success for Wirth, who got the nod over his fellow Residency alumni Marco Carducci in three of the five group games.

As disappointing as the tournament was, Wirth feels that the Canadian team can still take positives from it.

“I felt that there were lots of lessons that we all took from the whole tournament. I feel it was just a building point and everybody needs to look forward from that.”

It certainly feels like too talented a group not to go on and do well for the national team at the next level these coming years.

As for Wirth’s plans for his own footballing future, with the Whitecaps maintaining his MLS right and with the new pro pathway of WFC2 in USL, is that enough to see him come out of college early? That’s a decision still yet to be made.

“I’m kind of just taking it year by year,” he told us. “I’m going to keep that bridge with the Whitecaps and keep all my options open.”