It’s playoff time in the United States Soccer Development Academy (USSDA) and that can only mean one thing – AFTN’s Residency Week is back for it’s sixth year! (catch up with all the previous instalments HERE)

Westfield, Indiana plays host to this year’s USSDA playoffs, which get underway on Thursday and once again both Vancouver Whitecaps U16 and U18 sides are chasing their first national title after both wrapped up another respective Northwest Division title.

The two championships made it nine out of a possible 12 for the ‘Caps in their six seasons in the USSDA, more than any other academy side in the league.

The ‘Caps U18s are looking to bounce back from last year’s disappointment of an extra time loss in the 2016 Championship game. It was their second appearance in the U18 final in the past five years and their second heartbreaking loss to FC Dallas.

Much of that squad has moved on to the next part of their careers after that defeat, but the hunger to finally bring home the trophy is stronger than ever, and that desire will see a number of eligible players released to play from the Whitecaps USL team to help the cause.

WFC2 coach Rich Fagan guided the U18s to last year’s Championship game and was in charge of the squad up until taking over the USL side in February, and he feels the current crop of ‘Caps is one of the best overall groups he’s worked with.

“I think there’s more balance in this team going into the playoffs,” Fagan told AFTN. “We’ve always had good teams but we’ve maybe been a little reliant on special players. There’s probably more players of that type of quality going into these playoffs. 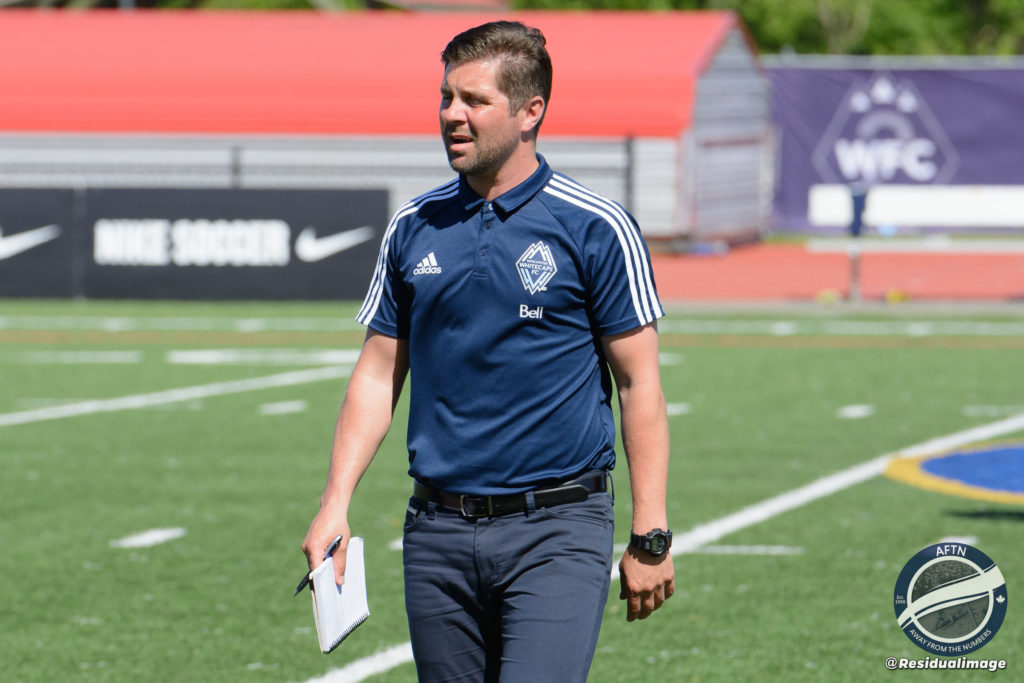 The second part of this season has certainly been one of change for the U18s. Fagan moved up to coach the USL side, with assistant coach Niall Thompson taking over the head coaching duties till the end of the season.

Thompson will be away taking his UEFA A licence this week and unable to take charge of the U18s in Indiana, handing the head coaching duties over to Pa Modou Kah, with the help of U14 head coach James Merriman.

Kah’s first year as a coach has seen him gain experience with the Whitecaps first team, USL side, and the Residency. This will be his first time at the academy playoffs and he’s looking forward to it, feeling this ‘Caps squad has what it takes to go far once again.

“I have a motto that says pressure is a privilege,” Kah told AFTN. “So I live by that every day. For me, this is a new thing. I get to see how it works. The players that we have in the under 18s, I believe that they have enough quality to do something great. Great things for this club. They went to the final last year, but that was last year. This year is this year. Eyes open.”

The U18s had another strong regular season, wrapping up the title with 64 points from their 31 matches and a record of 20 wins, 4 draws, and 7 defeats. That saw them finish nine points ahead of second placed Seattle Sounders but was only good enough to see them gain a 10th seeding in the playoffs, placing them in the second set of seeds.

The ‘Caps scored an impressive 81 goals, conceding only 34, with their biggest wins being a pair of 6-0 triumphs over Santa Cruz Breakers and Juventus Sports Club. Gloire Amanda (pictured below) and Alan Camacho led the scoring charts for the U16s, with 16 goals apiece. Amanda’s came in only 14 appearances, earning the 18-year-old a USL contract, and it’s hoped and expected that he’ll be one of the WFC2 players making the trip to Indiana this week. 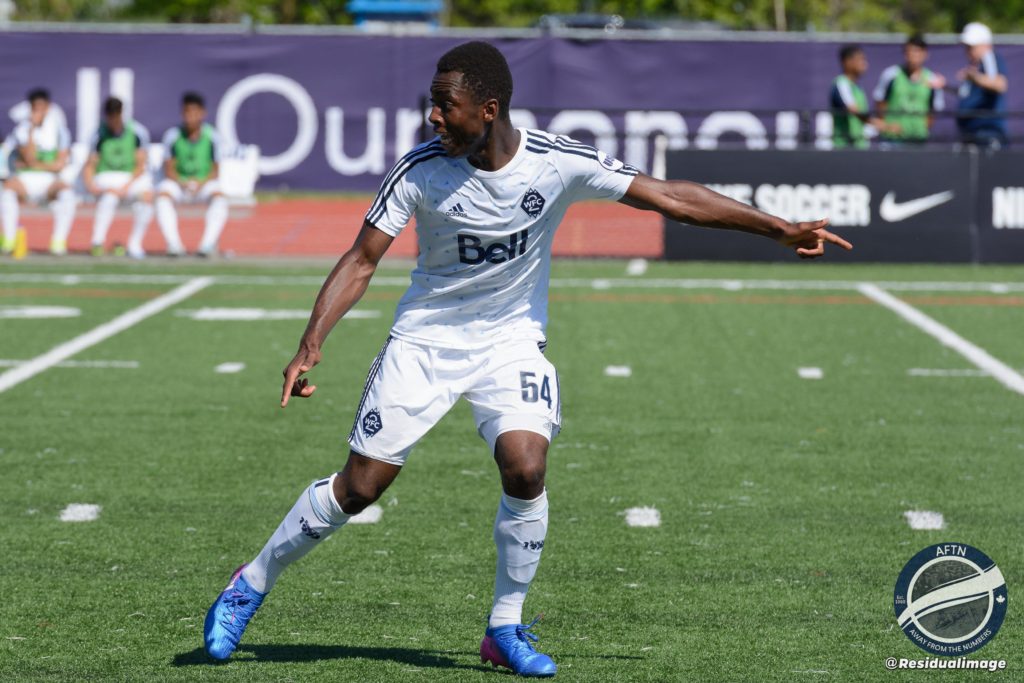 That seeding though means the ‘Caps U18s find themselves in one of the toughest groups of this year’s playoffs, drawn along side two fellow MLS academy sides, Real Salt Lake AZ and Columbus Crew, along with wildcard side Dallas Texans.

RSL are seeded 4th, with Columbus 12th, and it will certainly be a tough ask for the Whitecaps to get through this one. But the ‘Caps have always seemed to play better in the postseason season against their fellow academy sides rather than some of the independent academies. A situation that doesn’t really surprise Kah.

“That’s a natural thing in being a professional,” Kah told us. “That’s the thing that separates the world’s top players from the average players. The top players, they’re always ready for it. no matter what the game is, and when you’re talking about average players, what do they do? They only raise their game at a certain level.

“But for us, that’s not going to be a problem. We’re going there to raise our level whether we play against a MLS academy or a normal academy, it doesn’t matter to us. We have RSL, we have Dallas Texans, and we have Columbus Crew. You have to win to go through.

“The only thing we care about is coming in and doing the only thing that is in our DNA and our work rate and give what we have to give, and hopefully, you never know, because the ball is round. When the game starts, everything is easy or difficult on paper but you still have to play the 90 minutes.”

The ‘Caps kick off their group games at 3.30pm PT on Thursday afternoon against the Crew SC Academy Wolves. They’ll be looking to get off to a good start against the team that finished second in the Mid-America Division of the Central Conference.

The Crew finished the season five points back of division winners, and fifth seeds, Sockers FC, with a record of 16 wins, 1 draw, and 8 defeats from their 25 matches, scoring 68 goals in the process and conceding 26. The ‘Caps will certainly have to mark their dangerman Daniel Wright closely. The midfielder led the team with 21 goals from his 24 appearances, with striker Farai Mutatu firing in 15 goals of his own.

Dallas Texans are next up for the ‘Caps on Saturday. The Texans are the second lowest ranked team in the playoffs, and the 10th wildcard team. The finished sixth in the Frontier Division of the Central Conference, with a record of 13 wins, 2 draws, and 10 losses, and the ‘Caps will fancy their chances of getting the job done in this one.

The crucial deciding game could come on Monday when the ‘Caps face RSL. Vancouver will be hoping to have six points on the board by that stage, but even four would see them in a strong position. RSL are the only one of the three teams that the ‘Caps have already played this season, going down to a 2-0 defeat in the second game of the year in Casa Grande. The ‘Caps would love to get revenge on the postseason stage.

RSL won the Southwest Division of the West Conference, racking up 78 points from their 36 matches, and a record of 24 wins, 6 draws, and 6 defeats. But they scored less goals than the ‘Caps in the process, only 73, and conceded the same number, 34.

RSL’s goals were spread around four players, with Milan Iloski leading the way on 14, Alex Vedamanikarn grabbing 12, and Kristopher Fourcand and Marco Gonzalez adding 11 each.

They’re certainly be a formidable opponent but far from being an unbeatable one and a lot has changed with this ‘Caps U18 group in terms of confidence and maturity since that week two meeting. 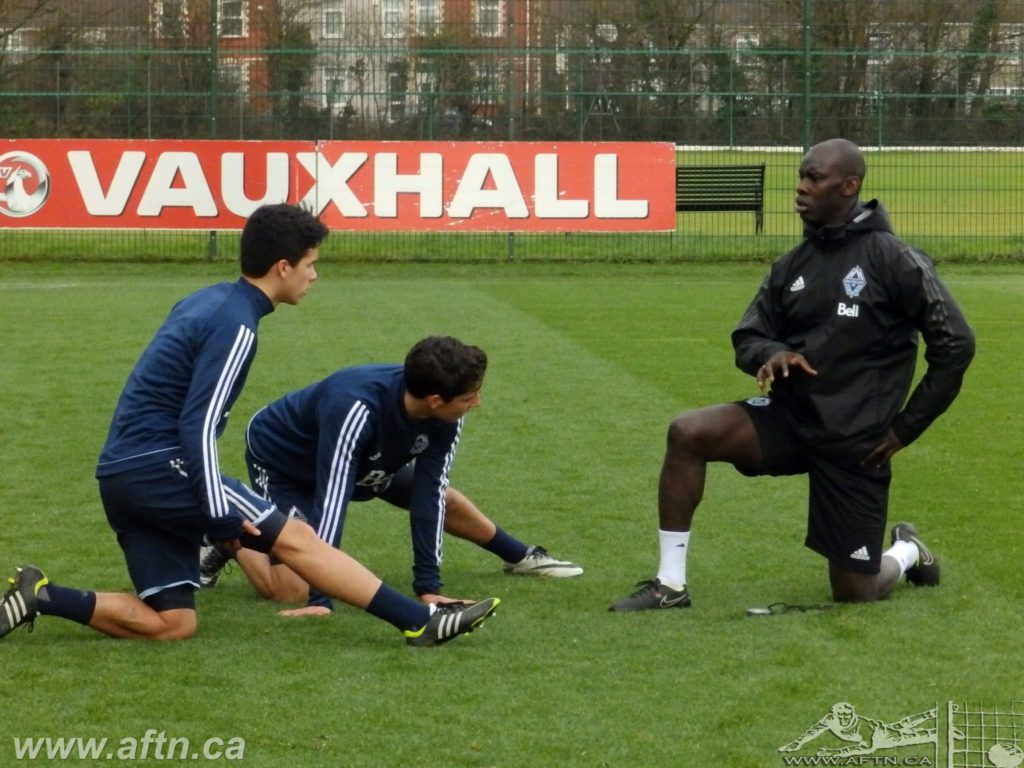 Kah is confident for the group heading in to the week and although he may not be the most familiar with them, he’ll certainly have help on hand to get the job done.

“I’m taking them with the help of Niall, who is away but we’ll still communicate on a daily basis what is happening in and around players,” Kah said. “I know that he will be sitting on his phone waiting for me to send a text on how the game went and stuff like that, so it’s going to be good.

“I have James Merriman who has been a Residency coach for a long time now and knows all the players in the Residency, and there’s Raegyn Hall who is going with me as a goalkeeper coach. The help around me is good so now it’s doing everything that is the best for the players so that they can perform.”

All the best to the guys. We’ll bring you full coverage all week here on AFTN.