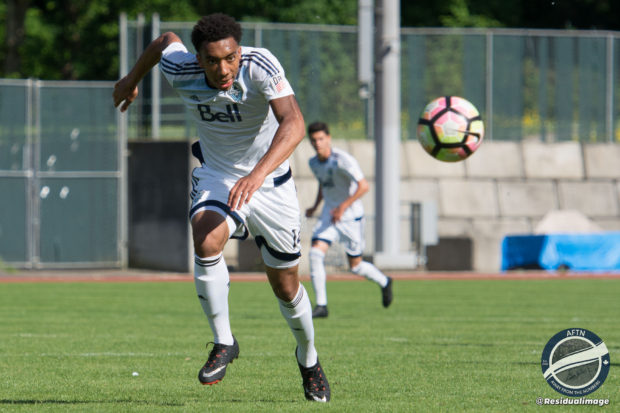 There’s always rooms for improvements, but Vancouver Whitecaps U16s and U18s both got off to almost perfect starts in their first group games at this year’s USSDA Playoffs in Indiana on Thursday.

Both teams did what they needed to do to come away with the crucial opening three points, without really hitting their stride and playing to their best, so a lot left in the tank for the next pair of crucial matches for both sides.

The 8th seeded U16s got the action underway first, coming away with a fairly comfortable 3-0 win over fellow MLS academy side Houston Dynamo thanks to a brace from leading scorer Jose Hernandez and one from Jefferson Alade. 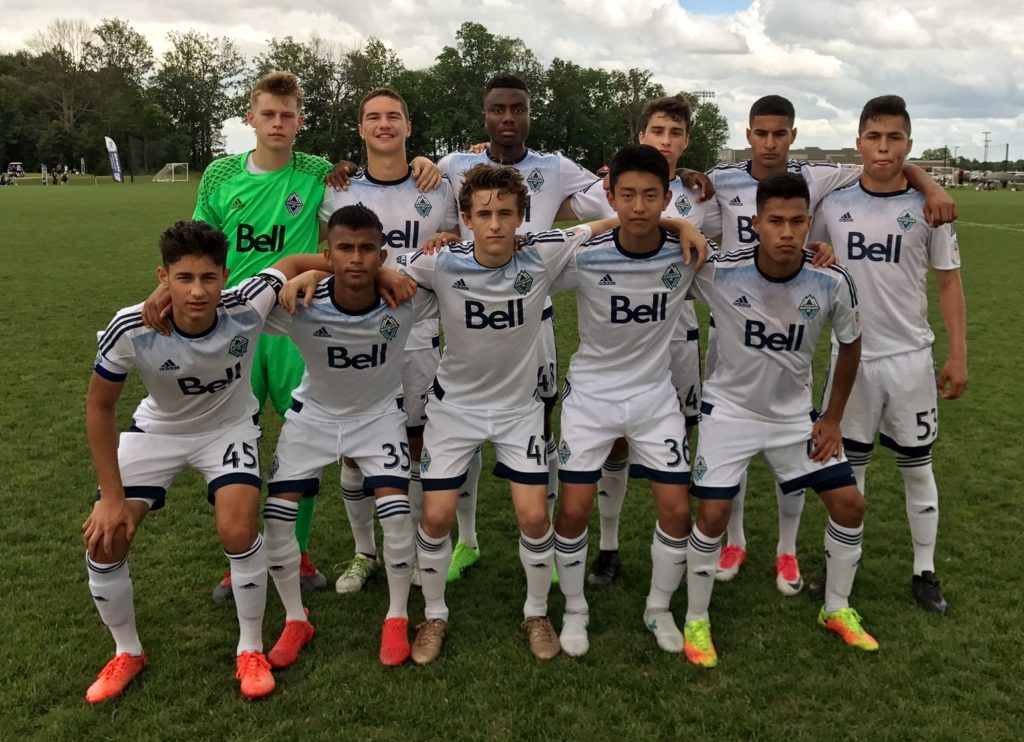 Hernandez opened the scoring just three minutes in, burying a penalty, and that’s how it stayed till half time, in a game in which neither side created much goalscoring threat.

Alade double the ‘Caps lead in the 53rd minute after a quick break up the left. Alessandro Hojabrpour saw his shot parried by the Dynamo keeper. The rebound came to Gurman Sangha, who chested the ball down into the path of Alade, who struck a low show into the bottom left corner to give Vancouver some breathing space.

GET IN! Here was our second goal of the afternoon, courtesy of @jeffersonalade. #VWFC pic.twitter.com/MCfoIt2nnC

And the ‘Caps killed the game off four minutes later when captain Jake Ruby pounced on a loose ball, powering into the box, before squaring for Hernandez to fire home his second of the game, and 20th goal of the season.

Despite more pressure, the ‘Caps couldn’t add to their tally. We’ve seen before how important goal difference can be in these group games, but right now, the ‘Caps lead the way in Group C by two goals over the also victorious LA Galaxy. Philadelphia Union are next up on Saturday. Kick off is 12.30pm.

It was a great start to the playoffs for the Residency and it was to get even better a couple of hours later when the U18s made hard work of it, but eventually fought back from going a goal down to a ten man Crew SC Academy side before hitting three goals in the final ten minutes to come away with a vital 3-1 victory. 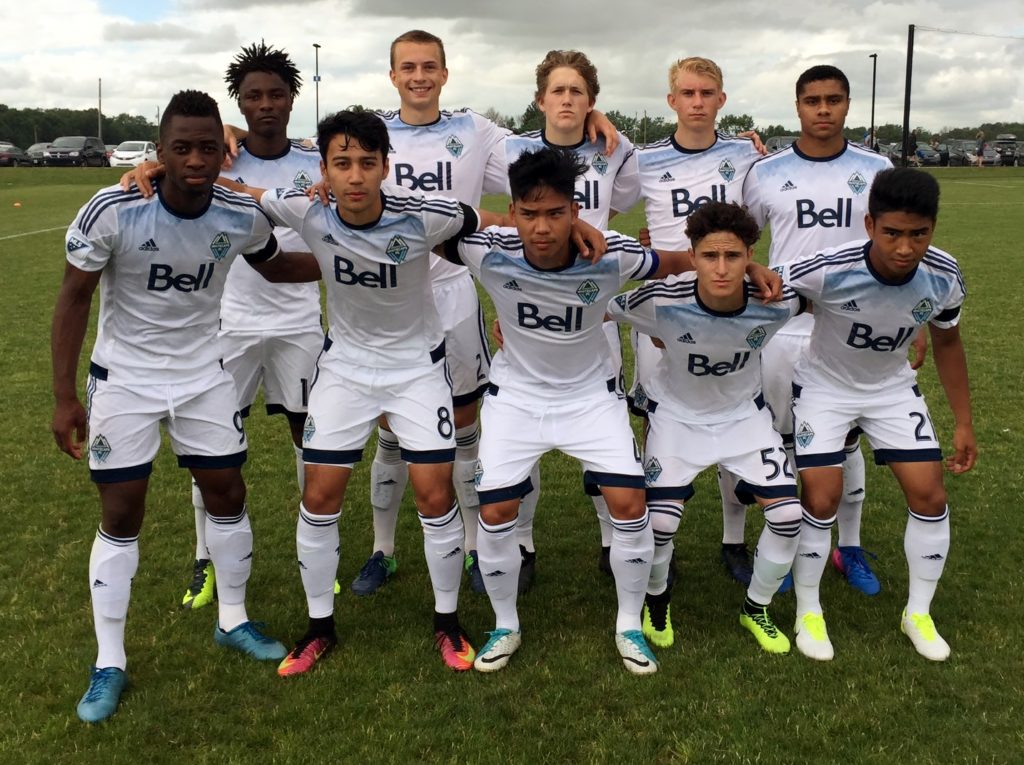 With a starting 11 consisting of five USL signed players – Gloire Amanda, Matthew and Michael Baldisimo, Terran Campbell, and Patrick Metcalfe – it looked to be a strong ‘Caps U18 side out there and they dominated the opening exchanges and should have been a couple of goals up in the first ten minutes after a goalmouth scramble saw a shot crash off the bar and Amanda just land on the top of the net with a great curling shot.

They couldn’t find the breakthrough but you felt it was coming and that feeling increased further when Crew were reduced to ten men a few minutes before half time following a brutal tackle on Amanda as he raced in clear on goal. The keeper produced a fantastic sprawling save from the subsequent Michael Baldisimo free kick, and the teams headed in to the break level and goalless.

The Crew then stunned the ‘Caps when they went ahead against the run of play on the hour mark, capitalising on a quick breakaway.

Vancouver had dominated the game throughout but you were starting to fear it wasn’t going to be their day, but as the Crew wasted time with stoppages for cramp and knocks, up stepped Theo Bair (pictured in our main photo) to stamp his authority on the game and right the ‘Caps ship.

The Crew had no answer to Bair as he tore up the right wing and his good work helped set up Michael Baldisimo for the equaliser with ten minutes remaining, with the USL midfielder pouncing on a loose ball to drill home into the bottom corner.

The goal gave the ‘Caps the kickstart they needed and they took the lead two minutes later when Bair finished off a cross from fellow sub, and joint leading scorer on the team, Alan Camacho, after some great work on the left from the striker.

Theo Bair volleys in a cross from Alan Camacho to put our U-18s ahead. #VWFC pic.twitter.com/tSn8rdzlQo

Crew heads were already down and there looked to be no way back for them. The Whitecaps made certain of that though a minute from time when Amanda ran in on goal, collected the rebound of the keeper, and tucked away the third.

The insurance.@Gloireamanda7 gets his own rebound to make it 3-1 and complete the comeback victory! #VWFC #WFC2 pic.twitter.com/D7Ziw6qT34

The ‘Caps made life more difficult for themselves than they needed to, but will be buoyed by the comeback as they get set to face the lowest ranked side in the group on Saturday, Dallas Texans, at 3.30pm.

The U18s sit second in their group on goal difference, with Monday’s game against the 4th seeded Real Salt Lake AZ looking to be the group decider.

Avoiding defeat in the opening matches is always the key in these playoff group games. Both the ‘Caps U16s and U18s did that and more on Thursday and will be brimming with confidence now heading in to Saturday’s second matches.

Get the job done guys.