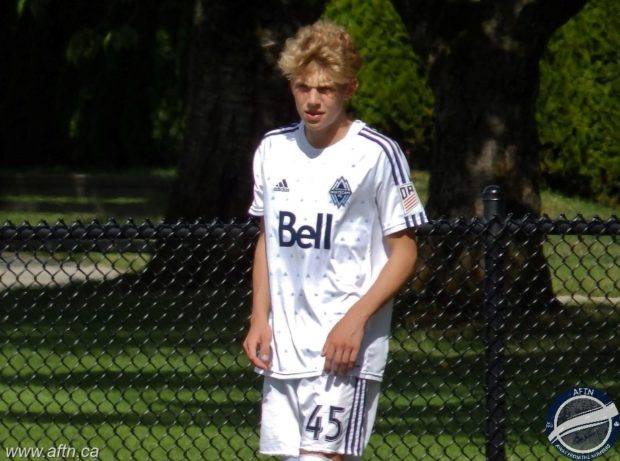 As 2017 ended, Simon Colyn was having a strong season as part of Vancouver Whitecaps Residency program. A budding prospect, the 15-year-old midfielder had caught the eyes of those in the management, and had been marked down as a definite one to watch for the future.

Four short months later, and four weeks after his 16th birthday, Colyn had earned himself a MLS Homegrown contract after impressing Carl Robinson during preseason with the first team.

I know we tend to use the phrase “whirlwind” when we talk about a number of these young players, but that’s definitely the best description to use for Colyn’s first half of 2018.

He did just that and he reaped the rewards, making the trip to Hawaii with the MLS squad, playing three matches, and contributing one assist.

Even that involvement was fast paced, with Colyn not even aware that any of that was on the cards as preseason got underway.

“I didn’t really have an idea,” Colyn said. “They had started practicing and then within the first week they had asked if I wanted to come practice one morning. So that was my first time and then from there, maybe once a week or so, I’d come in and then I got asked to go to first trip to Hawaii.”

Not a bad place to go for your first trip away with the first team!

It was a big step for Colyn in his dream of becoming a professional footballer and one which his family fully supported, but with a cautionary input for their young starlet.

“They were happy for me and were proud of me,” Colyn said of his family’s reaction. “But they kept on telling me that you haven’t accomplished anything yet, you have to keep working. Because if you want to achieve your goal, if you want to achieve your dream of being a pro then this is the time to do it and this is only the beginning, but you have to prove yourself and you have to work hard and show them what you’re capable of.” 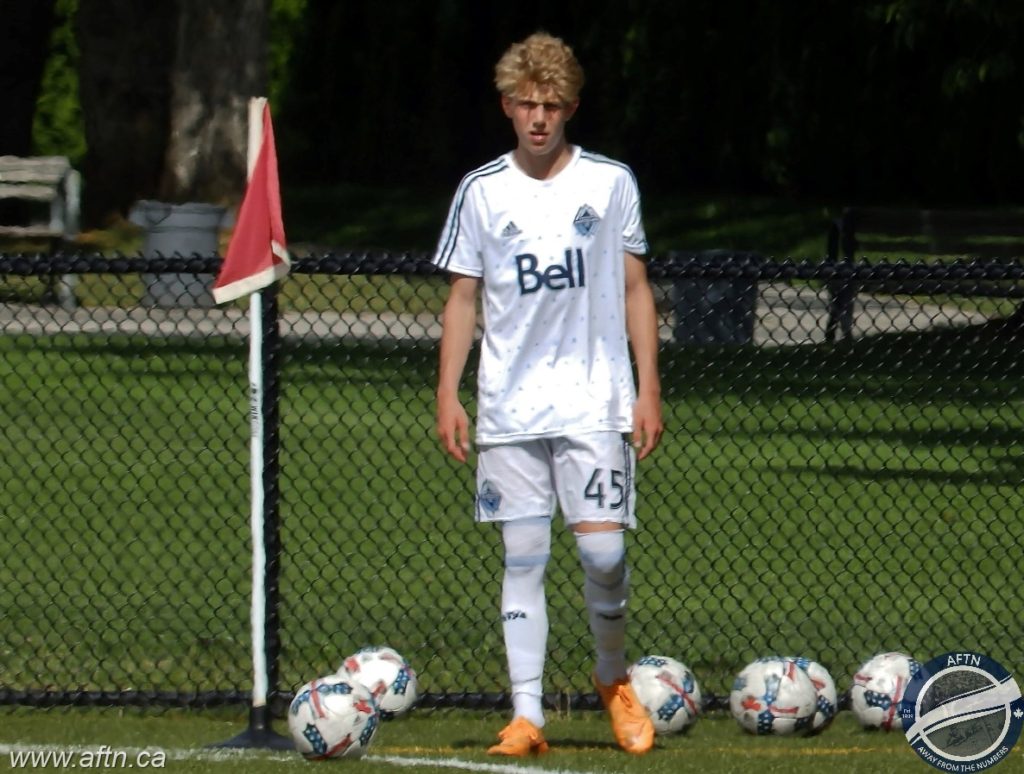 Colyn had spent his youth career playing his football with Langley United YSA and Surrey United SC before joining the Whitecaps Residency program in August 2016. He spent that 2016/17 season as part of Robert Earnshaw’s U15 group and it was the former Welsh international that brought Colyn’s potential forward to Robinson and the Whitecaps management.

Starting the current USSDA season with the U17s, the attacking midfielder soon found himself playing more regularly with the higher, and more challenging, environment of the U19’s, before making the permanent switch to playing with that squad for the end of the season and current playoff campaign.

The Whitecaps wanted to see how Colyn would react going back to the Residency environment after being away with the first team. That’s long been a benchmark for the team measuring the character and attitude of a youth player that they’ve given a carrot too.

His response what just what they were looking for, as Colyn found a rich goalscoring form, hitting five goals in six games for the U19s. The result was the offer of a MLS Homegrown contract, which Colyn signed in April, making him the second youngest Whitecaps signing after Alphonso Davies and the 15th youngest Homegrown signing in MLS history.

For a talented young player, there were a number of options on the table for him, from college to overseas, but as soon as the Whitecaps offered him that pro contract, there was no doubt in his mind that that was the right move for him at this stage of his fledgling career.

“I’ve liked it here since I’ve been here for the past year and a half,” Colyn told us. “I thought it would be a good place to start because I really enjoy it here. I like the coaches, I like the players, and after the preseason trips it felt like a good team to be a part of. I just felt it was a good place.

“I’m still young and there’s a lot of experienced players here, so during preseason, a lot of the experienced players they were teaching me along the way. So it was a pretty easy decision because they taught me a lot and they helped me out every day, so I thought it would be a good place to be.”

Colyn has been training regularly with his new MLS teammates in the mornings at UBC, whilst also continuing to train with his Residency teammates in the afternoons. In-between all that, the 16-year-old still has to find the balance to do his schoolwork. It’s a long time challenge for a number of these young players and Colyn’s admits it’s been tough in these initial stages.

“It’s pretty busy,” Colyn said with a smile. “It’s a little hard to manage it all right now. Half the time in the week I’m practicing with the first team, half the time I’m with Residency. I’m trying to keep up with school. It’s pretty hard to do it, but there’s only a little bit longer left of school this year, so I just have to finish that off and then I’ll be done for the year. But next year, yeah, I dunno.” 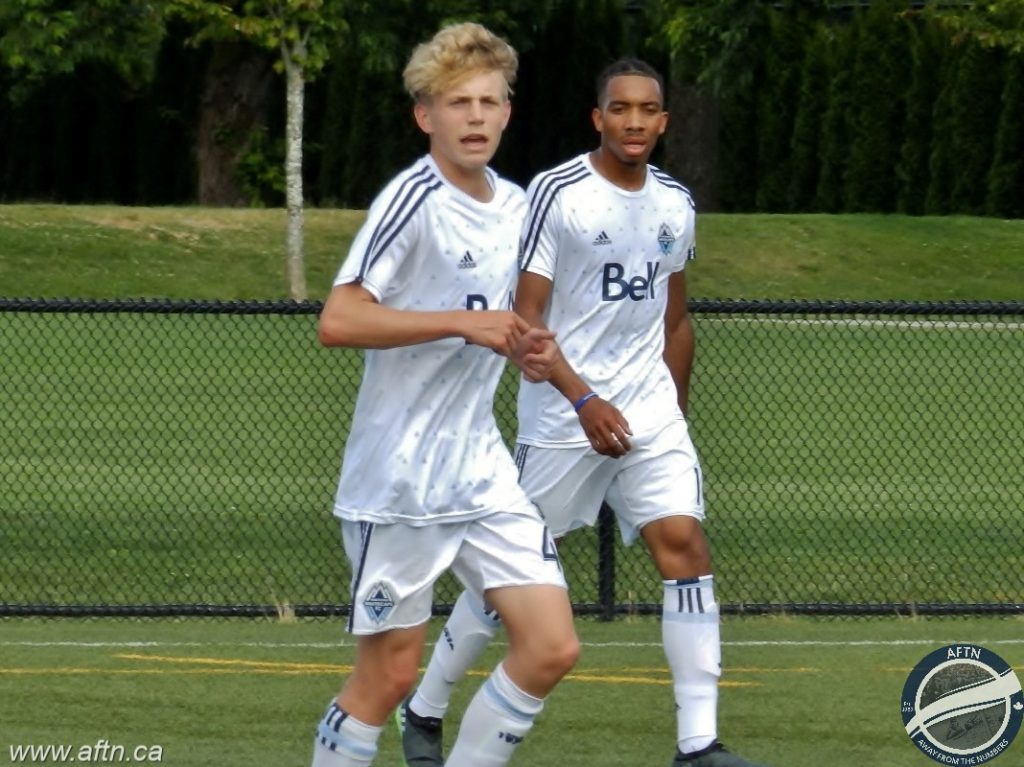 Right now though he’s down in San Diego with the U19s as they look to clinch a place in the next month’s USSDA semi-finals. Barring an unlikely goal swing on Friday, the Whitecaps have clinched a quarter-final place already.

Colyn has played in both U19 matches so far, starting the 5-1 win over New England Revolution and coming off the bench in Wednesday’s 3-1 win over Crew SC Academy Wolves, and is looking forward to the matches to come as the team look to try and reach a third USSDA Championship game in seven years.

Colyn finished the regular season with 8 goals in 15 appearances for the U17s and 11 in 14 for the U19s. As we mentioned, he was on fire in both goalscoring and assists after his initial spell with the first team. He’s built upon that since signing his MLS deal, and he feels he’s been able to take a lot of what he’s learned at first team training onto the pitch at Residency level to help improve his game further.

“Playing with the MLS team, it’s a lot faster pace,” Colyn said. “You adapt. When you’re playing with them you have to be much faster, quicker, and everything is sharper. When I go back to the Residency I try to keep that level, of just being sharper than everyone.

Colyn has yet to see any minutes with the first team. He may not this season, but Carl Robinson showed with Alphonso Davies that he’s not afraid to pitch his young players into the mix if he’s feels they’re ready for it.

Robinson also likes to give a lot of his Canadian players a taste of first team action in the Canadian Championship, and with Montreal heading to town next month for their Voyageurs Cup semi-final, it wouldn’t be a surprise to see Colyn get a run out in part of that one, and for the BC boy, making his first team debut at BC Place would be very fitting.

“It would mean a lot to me,” Colyn admits if he was to get the call. “It would be in front of the home crowd, so no matter what competition or league it’s in, to play for the first team is a big thing. If I did get the opportunity I’d be very happy and just take it as it comes, try my hardest, and keep going.” 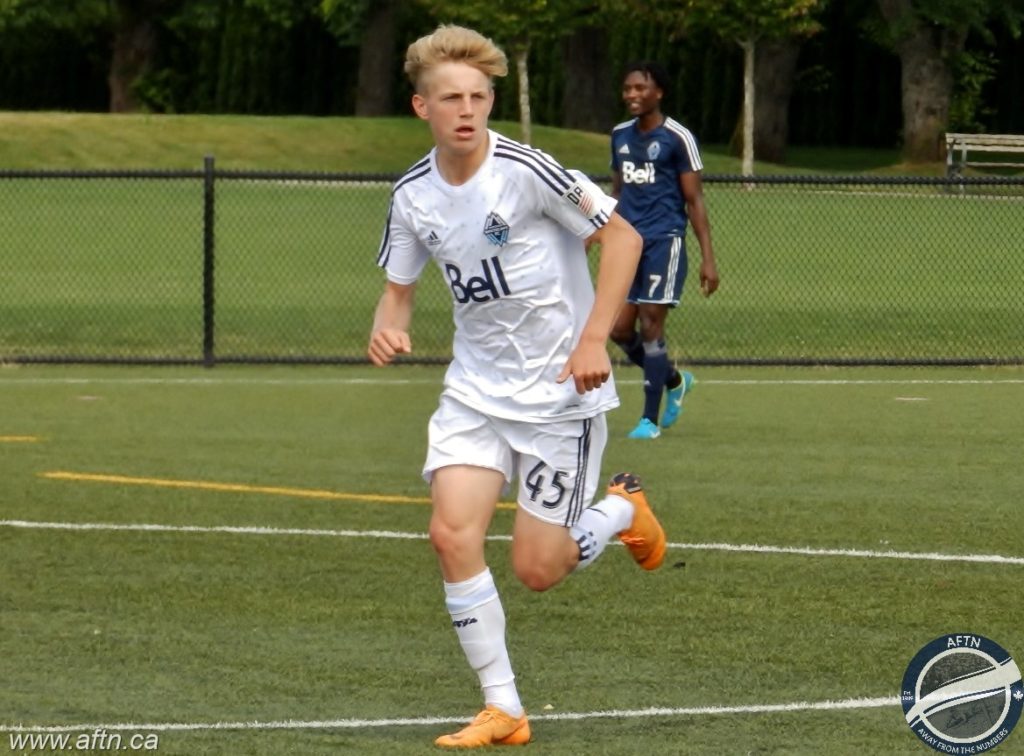