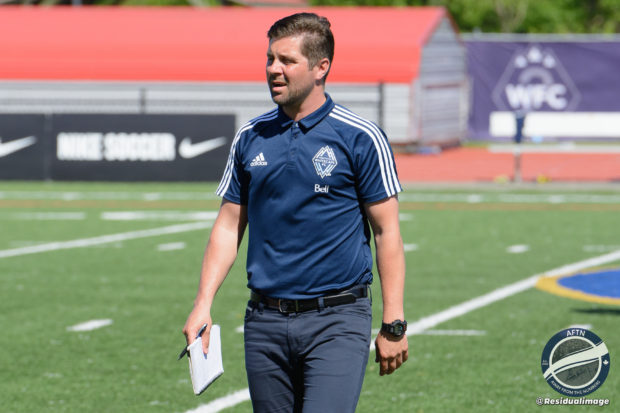 A slow and sloppy start was to cost WFC2 dear at McLeod Athletic Park in Langley on Sunday as the ‘Caps went down to a 2-1 loss in front of 1,131 fans to a strong Real Monarchs side with a lot of MLS experience in their ranks.

Two headed goals from corners by Taylor Peay and Nick Besler had the visitors 2-0 up and coasting by the 22nd minute and it could have been more if it hadn’t have been for the saves of Paolo Tornaghi in the ‘Caps goal.

Rich Fagan got his side together at the half, regrouped, made a couple of changes, and it was a much different, and better, performance by the ‘Caps after the break, pulling one back from Terran Campbell’s first pro goal in the 78th minute, and they had chances to take not just one, but all three points in the end, but couldn’t add to their tally.

“If I’m honest, I think they were maybe a little overwhelmed in the first 45 minutes,” WFC2 coach Rich Fagan told AFTN. “Just a little bit nervous to get on the ball and make a difference. Not quite quick enough closing down. I spoke to them about it at half time and credit to those guys, they did everything I asked in the second half and made a game of it.”

The ‘Caps were missing some regular starters in the likes of first teamers Ben McKendry, Marco Bustos, and Cole Seiler, captain Sem de Wit, and New Zealand international Deklan Wynne, all of whom are heading to Montreal for Tuesday’s Canadian Championship second leg.

That meant it was a WFC2 side made up of the younger and fringe players, including five teenagers starting, and another two coming off the bench, including Residency call-up Nicolas Apostol who grabbed his first pro assist on Campbell’s goal.

With so many players away, it must have given Fagan some headaches with his team selection for this one.

“It’s never easy, regardless of how old the team is,” Fagan told us. “They work their socks off every day and they make it difficult for us and that’s all we can ask. That’s what we’re about though. We’re going to be young most weeks and it’s up to these guys to make a difference. In the second half we showed we can play, and we got even younger in the second half, and they made a difference.”

It’s was WFC2’s third loss in their last four games. They’ve faced strong opposition, including two of the top three teams in the Western Conference, but have acquitted themselves well, even in defeat, and although they’ve dropped to 11th in the standings, they’re only three points off fourth in an extremely tight table.

But it’s not going to get any easier for the ‘Caps with the next three matches all on the road against Timbers 2, Didier Drogba’s Phoenix Rising, and the always tricky Sacramento Republic. It’s going to be a real test for Fagan’s young lads, but great for the continued development of the players, with a chance to stake a claim to more regular minutes in the process.

Let’s see who seizes the opportunity.