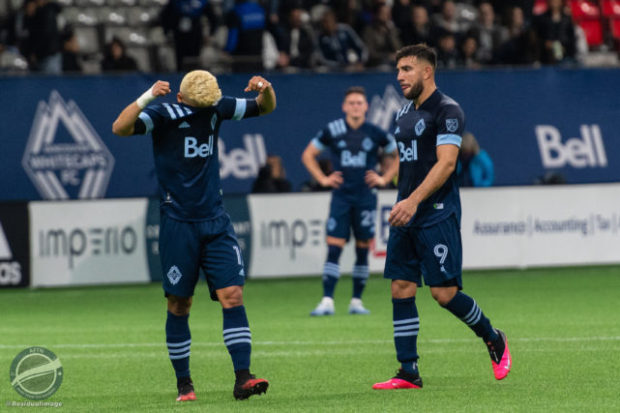 It’s the hope that gets you the most. After the will they, won’t they of the past few days, Vancouver Whitecaps’ playoff hopes were thrown a lifeline on Tuesday afternoon when MLS rescheduled the weekend’s postponed San Jose Earthquakes-LAFC match for Wednesday evening.

Just over 24 hours later, the ‘Caps postseason dreams were dead and buried.

Vancouver needed San Jose to lose to LAFC and then lose to Seattle on Sunday. If that were to happen, the Whitecaps needed to beat LA Galaxy in their own last game on Sunday to clinch an unlikely playoff berth. Simple on paper, but sadly all those plans fell apart on grass. Much like their tactics and gameplans at times this season.

Latif Blessing had raised the hopes of Whitecaps fans further when he put LAFC ahead in the 23rd minute, scrambling the ball home at the back post, but a horrible Eduard Atuesta own goal five minutes later brought the Quakes back level.

Still all to play for, but it was perhaps fitting that the man that has been the Cap killer over the years, Chris Wondolowski, was to fire San Jose in front in the 37th minute after having time and space to volley home at the back post. It was a lead that they weren’t to give up.

LAFC really went for it to start the second half and again Whitecaps hopes were raised again when San Jose went down to ten men after Jackson Yueill was sent off for a second booking following a crunching challenge on Jordan Harvey. Those hopes were finally extinguished though when Cristian Espinoza scored a third for the Quakes with 18 minutes remaining as LAFC pushed for the equaliser and left themselves short at the back.

Diego Rossi scored a goal five minutes into stoppage time to reduce the deficit, and put himself in the lead for the MLS Golden Boot, but that was all she wrote for the Whitecaps playoff aspirations and as the final whistle sounded, San Jose officially eliminated them and clinched the eighth and final spot in the West in the process.

Colorado’s 1-0 win over Portland tonight also saw the Rapids jump ahead of the Whitecaps on points, despite playing five less games, making any disgruntlement about Points Per Game moot if things stay that way after Sunday, which really is for the best.

If you look at the adversity the Whitecaps have faced this season, especially playing all their games away from home in the last two months, being away from their families, and all that entails, then yes, they deserved some reward for it. A playoff place would have been just that.

But football is a sport played on the pitch and not based on sentimentality and the Whitecaps have simply not been good enough. Their inconsistencies have killed them, and I include play, tactics, and a lot more in that.

Making the playoffs may have felt like a triumph and a victory in itself, but if they had got there, it was hard to see them do much. It is 2020 though and it’s a year of surprises. That may have been one too far though.

Going back to Colorado, you have to say fair play to them. They’ve been in it tough with their positive Covid tests, but they went out and did what they needed to do on the pitch to clinch a playoff place, winning their last two matches against Seattle and Portland. They got the job done.

Interestingly, Vancouver also played Seattle and Portland in their last two matches. Two wins for the Whitecaps there, even just a couple of points, and their playoff fate likely would have been very different. They didn’t get the job done and therein lies the difference between a playoff team and one which fails to make the postseason for the third straight year.

There’s one game of the regular season to, but the inquests can start now, and we’ll have more analysis of that both on the site here and on our podcasts over the coming days and weeks.

There are clearly mitigating circumstances this season but you have to be frank and brutally honest and say this team is simply far behind the top teams in the league. Money HAS been spent, but those it has been spent on have performed poorly.

The teams lack a difference maker or two or three or, well you get the idea. In the middle of the park, up front, defensively.

Can you even pick a Player of the Year? Has anyone actually merited that over the whole season?

So what’s next? That’s the burning question. It’s an important offseason. The third year now we’ve said that.

Let us know your thoughts on the season, what you’d like to see happen now, and where you feel this teams needs strengthened.