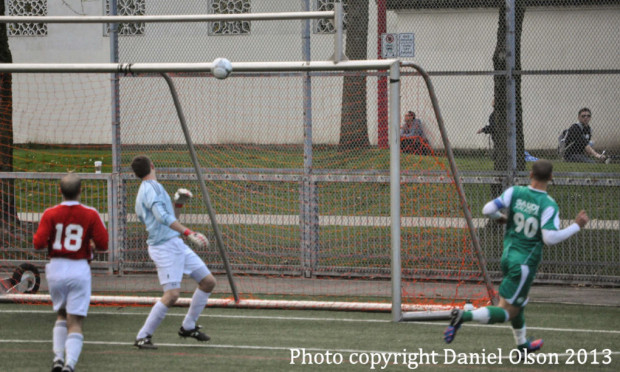 The quarter finals of the 2013 BC Provincial Cup got underway on another wet Friday night with one match in the B Cup and two in the Masters competition.

Andy Livingstone Park in Vancouver was the setting for the eagerly anticipated clash between two VMSL Division 2 Champions and the game didn’t disappoint.

Ajyal had only lost one league game all season, scoring 53 goals and only letting in eight over the course of their 18 games. They also lifted the VMSL Division 2 Cup a couple of week ago and were heading into the match as favourites. Sarajevo had won Division 2A with an impressive record of their own – only two losses, 56 goals scored and 19 conceded.

The Tigers came out of the traps fast and took the lead with just over five minutes gone when the dangerous Mohamed Habib was played in and finished with a delightful chip over the onrushing David Wiggins in the Sarajevo goal.

Ajyal kept the pressure on and Hussain Abu rose well to flash a header wide from a free kick in from the left.

Sarajevo finally found their feet and started to have the better of the possession, creating a number of half chances which they just couldn’t capitalise on and finding Ajyal keeper Hamidreza Naderi strong in goal.

The Tigers should have doubled their lead in the 26th minute when a neat lobbed ball over the Sarajevo backline sent Ali Alshehri through and with all the time in the world, he fired wide.

It was to prove a costly miss and Sarajevo got themselves back level with ten minutes of the half remaining.

Elvis Besic played a deep free kick in to the Ajyal penalty area from the right. The ball came to Rodrigo Cruz at the back of the box and he made no mistake in sweeping the ball home to make it 1-1.

Sarajevo now had a spring in their step and they came close to taking the lead when Besic sent a dipping free kick from the edge of the box narrowly over a couple of minutes later.

With five minutes of the first half remaining, Sarajevo took what looked to be an unlikely lead ten minutes earlier, as Amar Talic showed some deft footwork in the six yard box to poke home a corner under the Tigers keeper.

Sarajevo had another couple of chances before the half ended, with Naderi making a fantastic stop on the goalline from a powerful header.

Sarajevo only had 12 players for the game and were forced to use their only sub for an injury early on, but they battled bravely to stave off tiredness and some intense Ajyal second half pressure.

The Tigers had a great chance to level things up ten minutes into the second half.

Habib used his height to great effect to outjump the Sarajevo defence at a free kick, but he could only look on as Wiggins managed to get his hands up to the header on the goalline and parry the danger clear.

Ajyal kept pushing and were getting into some good positions but squandering the opportunities and with fifteen minutes of the match remaining, Sarajevo dealt a killer blow with a fine third goal that caught the Tigers short at the back.

Sarajevo found themselves with room breaking forward and although the keeper managed to deflect a cross into the box from the left, he was only able to do so to Cruz, who bundled the ball home for his second of the game.

To their credit, Ajyal kept fighting and Habib forced the keeper into a good save, before Murtada Almatrodd cracked a long range free kick just over and off the second crossbar!

The Tigers should have pulled a goal back with seven minutes remaining when Abu was put through on a one on one with the keeper, but took a poor touch before blasting over.

Although they continued to try and pressure the visitors, Sarajevo saw the game out quite easily, which was a great feat considering their numerical disadvantage and them having to come back from losing such an early goal.

The 3-1 win takes Sarajevo through to the B Cup semis next weekend where they will travel to face the winners of Saturday’s Prospect Lake Lakers v Langley FC Dynamo match.

You can watch some footage from the game below. Be warned, we only got one very blurry first Sarajevo goal and a more decent shot of their second. Also a few other highlights and some terrible video quality from our crappy at night camera!

In Masters Cup action on Friday, VMSL Masters Premier runners up, PCOV, ran out comfortable 3-0 winners over Coastal FC Peace Arch of the FVSL at Memorial Park in Vancouver. Leading 1-0 at the half, they added a double in the second and even had the luxury of having a penalty saved.

There was an all VMSL clash in Port Coquitlam with VMSL Masters Champions Poco Castilians edging out Sapperton Rovers 2-1, despite being down to ten men for around an hour.

Saturdays sees action across all four of the Men’s competitions, with one A Cup game, one B Cup, three U21 games and one Masters match up.

We should have coverage from Vancouver Thunderbird’s game at VMSL champs Columbus FC and from the U21 game at Port Moody between PMSC Lordo Gunners and the Victoria Highlanders prospects.

You can find details and venues for all this weekend’s action HERE. Try and make it out to some of the games if you can.