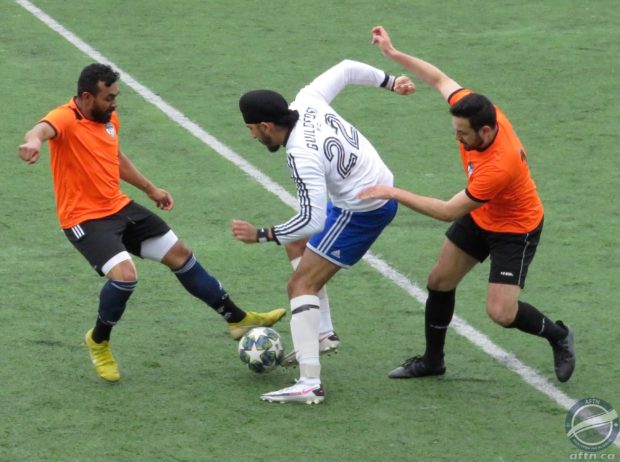 The quarter-finals of the Keith Millar BC Provincial B Cup threw up an interesting selection of results last weekend, with a couple of close encounters and a couple of comfortable wins. Did a clear favourite for the trophy arise from them? Very possibly!

By the end of them all, three leagues were still represented in the final four – the Richmond Adult Soccer Association (RASA), Vancouver Island Soccer League (VISL), and Vancouver Metro Soccer League (VMSL) – and all of them will fancy their chances of lifting the cup at Burnaby Lake next Saturday afternoon.

The action kicked off on Saturday afternoon at Layritz Park in Saanich, with VISL double winners Gorge-Us Guys seeing off Abbotsford United B from the FVSL 3-0.

All the goals came in the second half of this one, with Ryan Timmer firing Gorge ahead just after the restart. Lucas Allen headed home to make it 2-0 around the hour mark and Drew Brittain chipped the keeper from 30 yards out to seal the deal for the islanders with 10 minutes remaining. VISL Executive Director Vince Greco had the match breakdown on Twitter.

The action moved to Minoru Park in Richmond on Saturday night and it was a close one for the RASA champions Richmond All Blacks who got past Aldergrove United Highlanders from the FVSL 1-0.

It was a closely contested match but the All Blacks got the decisive goal in the 65th minute, heading home from a corner. The Richmond side’s task in the semi-finals was then made all the harder, however, when they lost two players to red cards in the final 17 minutes. The RASA on Twitter account has more of a match breakdown.

The other two semi-finals were played on Sunday evening, kicking off at Newton Athletic Park Stadium in Surrey with a feisty, and enjoyable, affair between VMSL Division 3B champions Guildford FC and RASA League Cup champions West Coast FC. 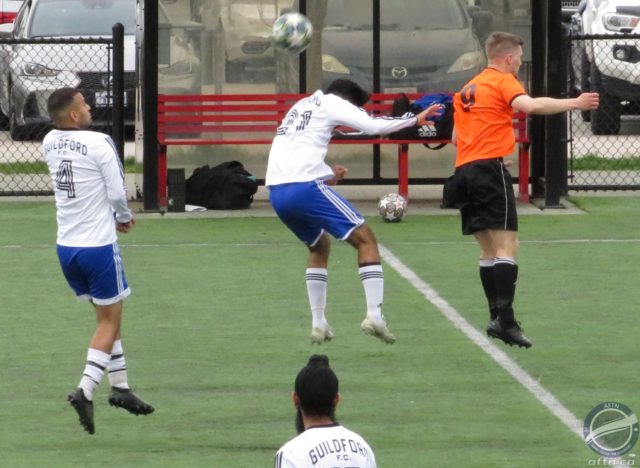 I don’t think there will be lot of love lost between these two teams after this match and it would have been an even more entertaining encounter if it has gone 11v11 for more than 13 minutes, but a game changing moment at that stage of the match saw West Coast’s Mathew Le Gal sent off for a last man tackle.

If certainly felt harsh for the Richmond team but to their credit they took the game to the Surrey side and were carving out the better opportunities to open the scoring.

But Guildford hit them with two decisive goals just before half time to take control of the match. A fantastic through ball split the West Coast defence and sent Harvir Padda in on goal, and the Guildford striker showed some nice footwork to slot it home and make it 1-0.

Guildford doubled their lead three minutes into stoppage time when Nick Favia showed great composure in the box to make space to fire home from seven yards out.

West Coast had nothing to lose and continued to take the game to Guildford in the second half and got their reward when Nicholas Varley drilled home a low free kick from just over 25 yards out in the 53rd minute to make it very much game back on.

Both teams had their chances to add to the scoring but neither could penetrate their opponent’s defences and Guildford saw the game out and booked a spot in the semi-finals.

You can see our highlights of the match (we just catch the tail end of the sending off due to taking photos) on our YouTube channel HERE and in the video below:

The final action of the weekend played out on the South Turf up at UBC, with VMSL Division 2A winners VUFC Snipers demolishing FVSL Division 2 champions Mission SC 8-1.

The FVSL side had only given up 23 goals in their 18-game season so this lopsided scoreline was not only a surprise, but may have installed the Vancouver lads as the ones to beat in this year’s competition.

So after all of that action, here’s how the weekend’s four quarter-finals shape up:

You can find all of the results and fixtures for all of the BC Provincial Cup games HERE.