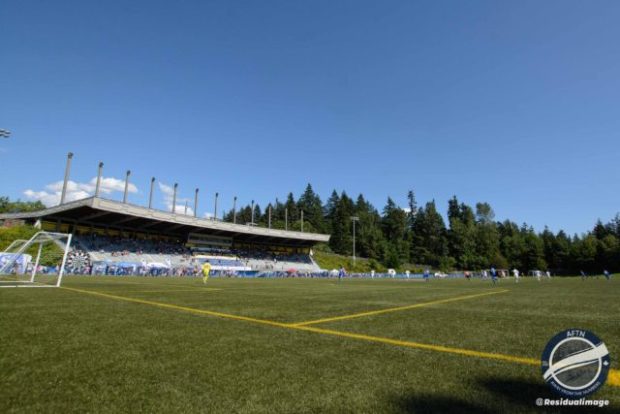 We kicked off our Groundhopping tour of League1 BC stadiums with a look at Swangard Stadium, home of TSS Rovers. Next, we head to Vancouver’s University Endowment Lands to take a look around Thunderbird Stadium, home to Varsity FC. 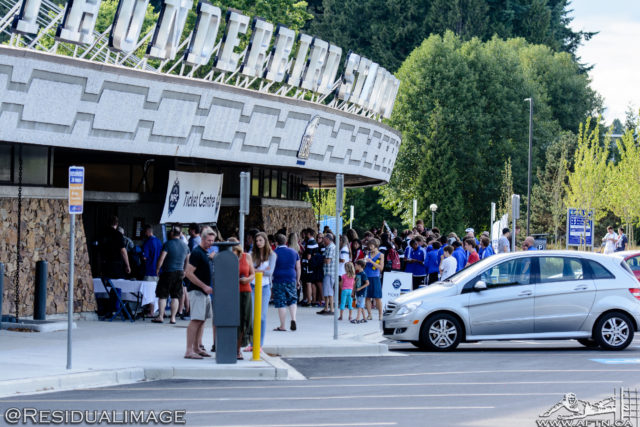 Capacity: 3,411 permanent seating (with potential for up to 12,000 throughout the stadium) 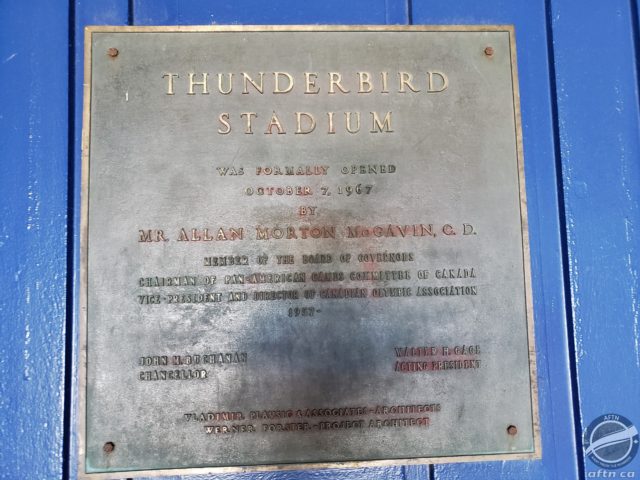 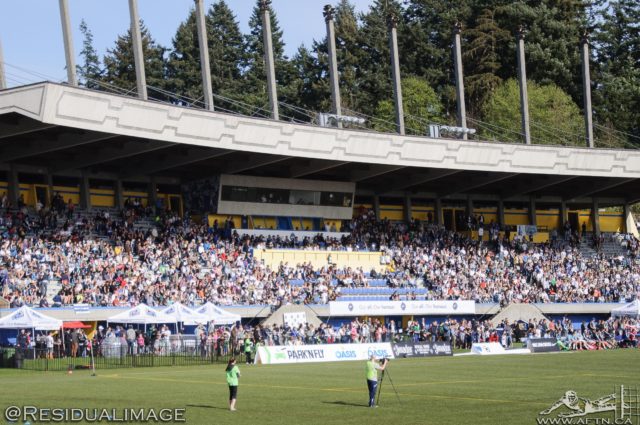 History: Built in 1967 to replace the aging 30-year-old Varsity Stadium and with the aim of being in a more open area of the fast expanding campus, Thunderbird Stadium was officially opened on October 7th that year as home UBC gridiron football, soccer, and rugby teams.

Designed by Vladimir Plavsic & Associates, a Yugoslavian-born former UBC architectural student, the original cost of the stadium was $1,236,188, raised by the UBC Board of Governors, plus a $5,000 gift from the 1967 graduating class for a scoreboard and track timing device. That would be just over $10 million in today’s money.

There’s been murmurs about redeveloping Thunderbird Stadium and the surrounding area for many years now. The most recent announcement came in June 2019 when the UBC Stadium Neighbourhood Plan was revealed. This will see housing, services, and a brand new Thunderbird Stadium built that will see a covered stand of 5,000 permanent seats and a “community recreation green space” area that would be able to be converted to accommodate 5,000 more seats through uncovered temporary bleachers for specific events. Following a meeting in September 2020, further consultations will take place till possibly into 2023, so we’re a long way away yet from seeing this project become a reality. 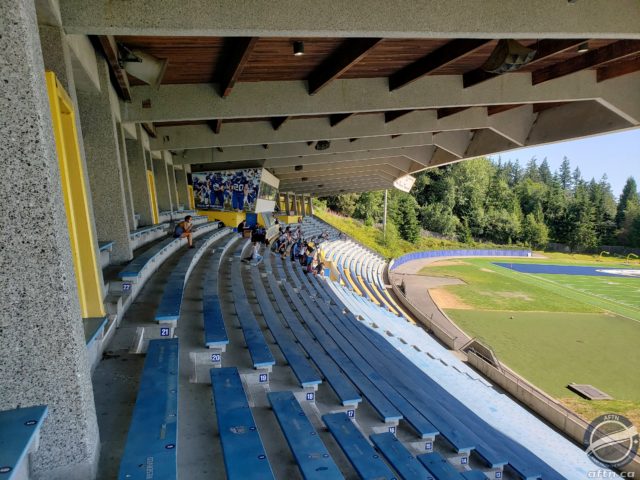 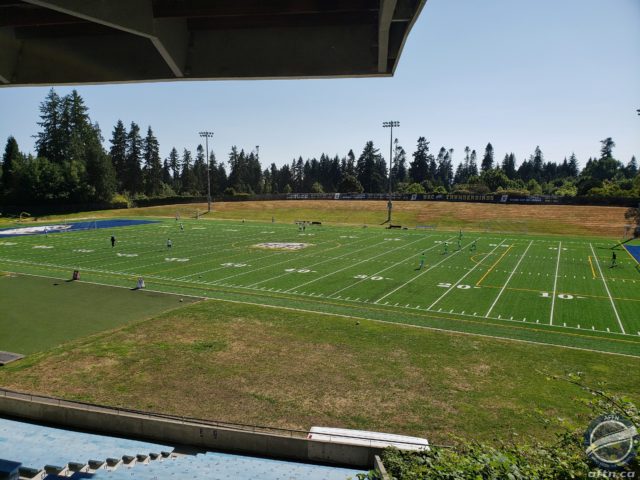 Thunderbird Stadium – new pitch and westerly view from the grandstand

Facilities: Seating 3,411 on benched rows, Thunderbird Stadium’s single stand is covered by a roof suspended by one and a half inch cables and supported by 12 concrete columns. The towers are all topped by thunderbird statues created by First Nations artist Bill Reid. There are just over 100 blue plastic bucket seats in the stand situated in front of the press box.

Up to 5,000 additional fans can be accommodated on the grass embankment and a total capacity of 12,000 could be attained through standing and seating incorporating various areas both inside and outside of the main stand.

The artificial grass field was replaced in June 2021, having last been replaced in 2010. Previously a Polytan surface, the new pitch is an artificial hybrid monofilament, slit film turf with both soccer and gridiron markings.

The outside of the stadium’s front wall is built from Salish Stone and has a box office and gated entrance.

The stadium boasts four dressing rooms, a reception room, a PA booth, press box, statistician’s room, a concession stand in the concourse, offices, a laundry room, and fully-equipped training room with cold tubs. There is also the Heritage Room, a meeting area often used at half time and full time of games and for hospitality purposes. The UBC Football Academic Centre was opened in 2015, a learning centre to aid student athletes.

The stadium primarily hosts soccer and gridiron football but a number of rugby matches and concerts have been held at Thunderbird over the years. It was featured in the 2006 soccer themed romantic comedy “She’s The Man”, where it acted as the fictional Illyria Stadium. 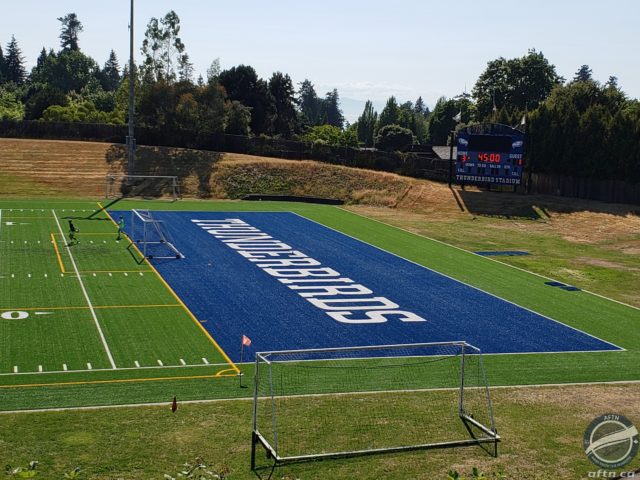 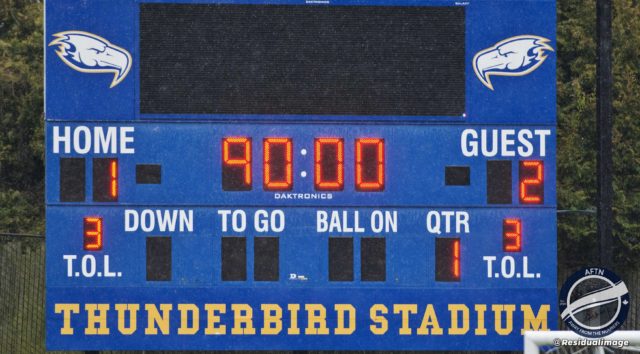 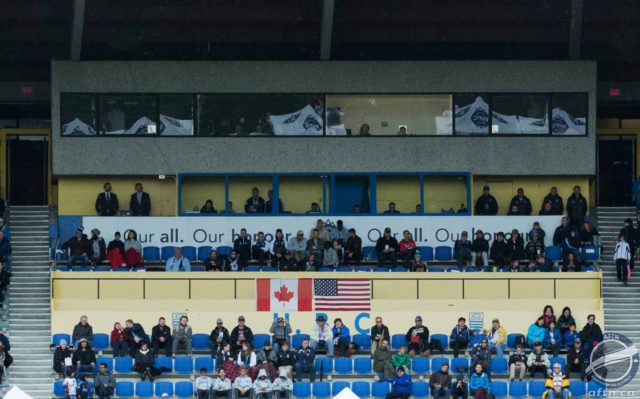 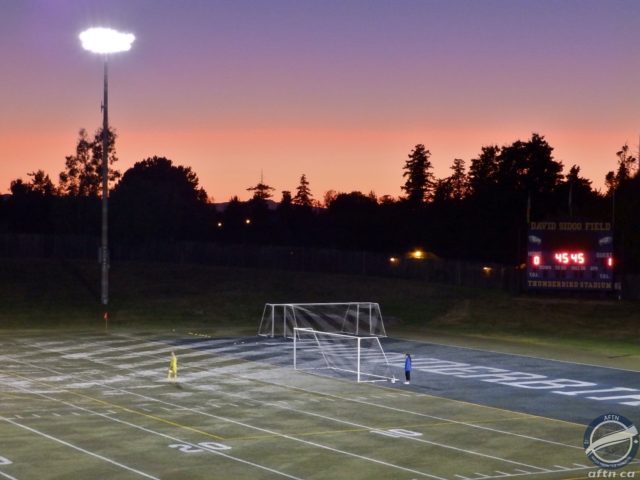