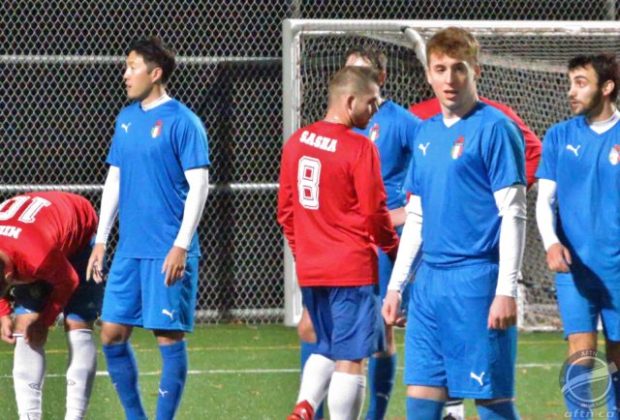 The first round group games wrap up this weekend in the Vancouver Metro Soccer League (VMSL) Cohort Cups, with a lot still to be decided across the divisions.

The three group winners, plus the best placed runners-up, will advance to the semi-finals, with all the teams that finish outside of that moving on to play some more games dependent on their group placings.

BB5 United, MAFC Tigers Vancouver, and VUFC Hibernian had all clinched their William Azzi Premier Cohort Cup groups by the end of the week four action, and all three still remain undefeated for the season. Who will join them in the semi-finals is still very much up for grabs though, with four teams still very much in with a shout after the week five action last weekend.

In Group A, BB5 United maintained their 100% record after a hard fought 2-1 win over Westside at Point Grey on Saturday afternoon. Boris Si continued on from his hat-trick the week before with another goal for BB5, with Nic Morello also on the scoresheet for the Surrey side. Jaihyun Jeong scored for Westside.

The other Group A action took place at Burnaby Lake on Friday evening, as Club Inter EDC Burnaby put themselves at the top of the runners-up standings with a 2-0 win over Rino’s VSC thanks to a Reece Miles double.

Inter travel to face BB5 at Newton on Friday night, knowing that a win, maybe even a draw, would secure them a semi-final spot. Westside are chasing Inter for second in the group and head to Trillium to take on Rino’s VSC on Saturday afternoon.

MAFC Tigers also kept their 100% record intact in Group B with a 2-0 win over Croatia SC at Burnaby Lake on Saturday afternoon. Farivar Torabi took his tally to the season to six when he opened the scoring in the 38th minute, pouncing on a loose David Malamura pass to run in on goal and fire home. Nima Moazeni Zadeh secured the three points when he headed home a corner with 15 minutes to go.

You can watch the whole game on the video below:

That loss for Croatia sees SFC Pegasus sitting second in the group on seven points following their 3-0 win over NVFC Norvan at Fen Burdett Mahon Stadium on Saturday afternoon thanks to a Shabaz Khattra brace and a goal from Amitoj Arora.

Group C leaders VUFC Hibernian dropped their first points of the season at Newton last Friday after a 1-1 draw with the resurgent BCT Rovers Hurricanes. Victory Shumbusho hit his eighth of the season to put Hibernian ahead with two minute go to, but Pavi Dhillon capitalised on a defensive error to grab a point two minutes into stoppage time.

West Van consolidated their second place in the group after a narrow 1-0 win over Burnaby Selects White Eagles at Ambleside on Friday night thanks to an Eoin McCormack goal.

The Amblesiders now travel to Thunderbird Stadium tonight to take on VUFC Hibernian, still in with a chance at reaching the semis, while the White Eagles play host to the Hurricanes at Empire.

So after all of that, here’s how the VMSL William Azzi Premier Cohort Cup standings are looking after Week 5: 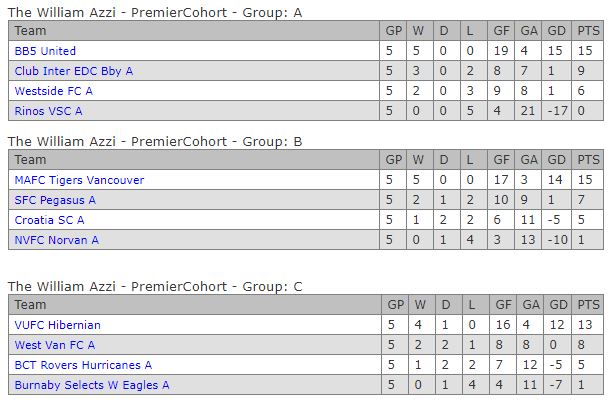 There’s still a lot to play for in the Ruben Tremarco Division 1 Cohort Cup too.

GN Sporting Club have wrapped up Group A taking their full 15 points at their disposal, while barring a huge goal swing, Metropolitan FC have won Group B. Group C will go down to the wire though, as will the battle for who will claim the best runners-up spot.

We headed to Burnaby Lake on Friday night to take in the top of the table Group C game between ICSF Columbus and FC Serbia United, which saw a 15th minute winner from Giuliano Montagliani secure all three points for the Italians. That win gives them a one point lead over Shaheen FC Faly, with the two teams meeting at Empire on Saturday afternoon.

You can see our highlights of the game below: