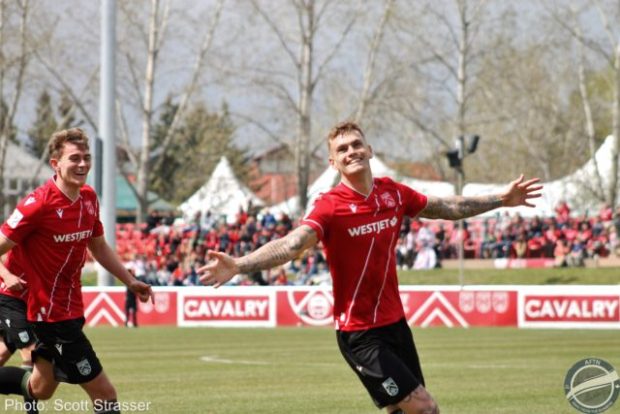 Three late goals capped off an otherwise cagey Canadian Premier League (CPL) game between Cavalry FC and Valour FC at Spruce Meadows on May 21 – a match Cavalry won 2-1, thanks to goals from Myer Bevan and Elijah Adekugbe, who scored the winner in the second minute of added time.

Little happened in the opening 80-plus minutes, but the game exploded to life in the 83rd when Cavalry substitute Charlie Trafford was brought down in Valour’s 18-yard box, giving the hosts a late penalty kick.

Striker Myer Bevan took the spot kick, and while his effort was initially stopped by Valour keeper Jonathan Sirois – his third penalty save of the season – the New Zealander knocked in the rebound to put Cavalry up 1-0 in front of the cheering Foot Soldiers. 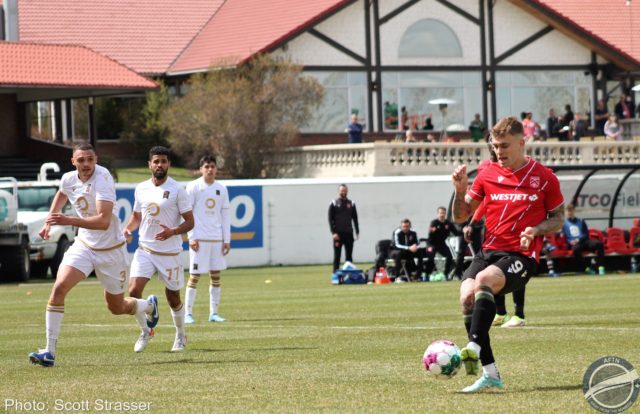 Valour silenced the crowd just four minutes later, however, and likely figured they’d spoiled Cavalry’s afternoon with an 88th-minute equalizer from Stefan Cebara. A Valour corner kick landed at the head of Moses Dyer, flicking the ball toward Cebara at the back post, who nodded it home from close range.

Heading into stoppage time, it looked like Cavalry would have to settle for their second consecutive draw in the CPL, having tied HFX Wanderers last week thanks to a late equalizer from Daan Klomp.

But then in the 92nd minute, Adekugbe – another second-half substitute for Cavalry – scored his first CPL goal of the season, punching in a layoff from Trafford that Sirois deflected out to the top of the box.

“I just tried to side-foot it, keep it on target and keep it low,” Adekugbe recounted of the goal. “Thankfully it went in.”

Having missed the entirety of the 2021 CPL season due to a torn Achilles tendon, Adekugbe said it was an emotional goal and a big moment for him personally to come into the match late and score the winner.

When asked in the post-game press conference if it was his biggest goal in a Cavalry shirt, he said it most likely was.

“I don’t score too many, so it has to be, right? It was a good goal, a big moment. I’m just thankful the opportunity came, and I was able to put it away,” the 26-year-old midfielder said.

“Man, I blacked out when I scored, I can’t even lie. There were just so many emotions. It’s been such a long wait and I feel the last 18 months have tested me so much. To have that moment after everything, it means the world to me.”

Cavalry’s win vaults the team from fifth place into second in the CPL table. They are currently six points behind league leaders Pacific FC, who have started the season with a 5-2-1 record. Cavalry have a 3-2-2 record, putting them two points ahead of York United in third place.

After the match, head coach/general manager Tommy Wheeldon Jr. praised his players for not giving up and rescuing the result late.

“I’ve got to give credit to the lads,” Wheeldon Jr. said. “They just don’t have any quit in them. It’s not ideal when you concede a goal late, having just scored a goal late, but they don’t quit.

“We saw it last week against Halifax. It’s a pattern that they’ll keep playing until the final whistle. We talked about this in the off-season – play to the whistle – and the boys are doing that.”

Following a cagey first half that saw just four shots on target from both teams, Wheeldon Jr. touted the impact of his substitutes in the late stages of the game, including Adekugbe, Trafford, and Jean-Aniel Assi. In addition to winning the penalty kick, Trafford also played in the ball that led to Adekugbe’s goal.

“We know the quality of Charlie, of Elijah,” Wheeldon Jr. said. “Jean-Aniel has unbelievable pace for days and gives the fullbacks a different problem. When they came into the game, they did change the game. Credit to Valour. I thought it was a very even game and we stole it at the end with our mentality.” 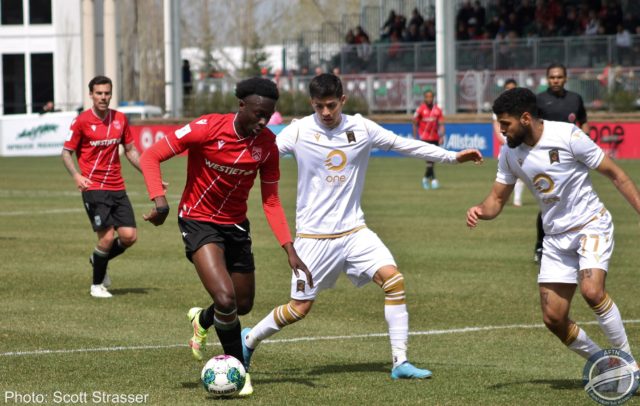 Cavalry’s win over Valour comes four days before the Calgarians take on Vancouver Whitecaps FC in the second round of the Canadian Championship at Spruce Meadows on May 25.

Similar to when the two teams faced each other in the 2019 Canadian Championship, Vancouver is heading into their cup tilt against Cavalry in poor league form – the Whitecaps’ 3-2-6 record places them at the bottom of the western conference.

Meanwhile, an injury crisis among the MLS team’s goalkeepers has resulted in the Whitecaps drawing upon York ‘keeper Niko Giantsopoulos on an emergency short-term loan for their next league fixture.

Wheeldon Jr. said Cavalry’s coaches will be keenly watching Vancouver’s match against Charlotte tomorrow to scout the MLS side and gauge any weaknesses Cavalry might be able to exploit.

“It’s an opportunity to put more pictures on the wall and memories in the bank. We’ll watch their game tomorrow. I’m sure they’ll have a few poker hands they’ll play. We’ll look at what we can do to nullify their strengths and oppose any weaknesses they have.” 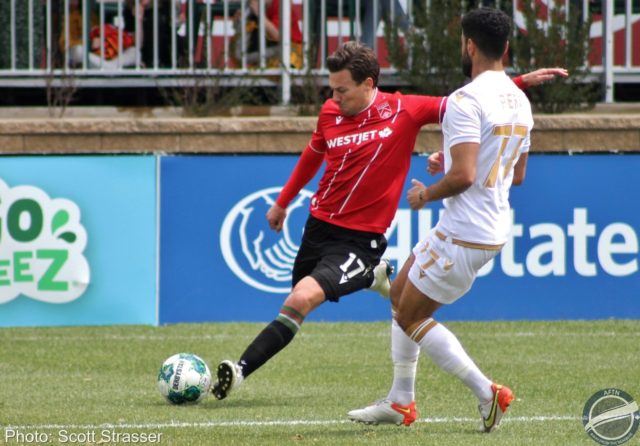 Ben Fisk prepares to unleash a shot in the first half