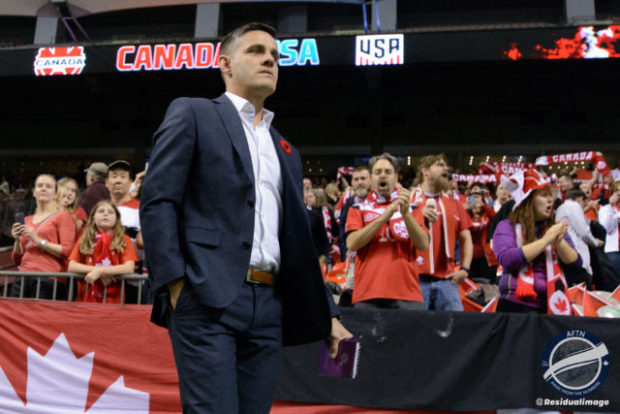 John Herdman’s appointment as Canadian Men’s national team coach on Monday was certainly met with a mixed reaction. There was shock, there was bewilderment, there were expected nods from some quarters, there was anger.

One thing there definitely didn’t seem to be was a string of delighted people applauding the move to replace Octavio Zambrano with him. At best there was a “well that’s ballsy” and “Zambrano wasn’t the right man for the job” kind of vibe, but those felt few and far between.

Exactly what was behind the move to throw both the Canadian men’s and women’s programs into disarray is still unknown. Zambrano has promised a press conference, whilst the CSA and Herdman aren’t talking to the media. No transparency at the top? Quelle surprise. There’s a reassuring stability in that at least.

I’m going to give some of my thoughts on the decision in another article (there feels like 20,000 other ones out there already anyway!), but after a day to digest the news, it’s clear who the move is hitting the hardest – the players of the Canadian women’s national team, who for the most part found out when everyone else did when it was announced on Twitter.

As happy as they are for their coach and mentor and the new challenges that lie ahead for him, the underlying feeling was that of pure shock as they took to social media to share their thoughts.

We thought we’d curate a few of them for you (from current and recent players on Twitter) to let you see the general feelings of the close knit group, starting off with the comments of Canada’s one and only real Queen, Christine Sinclair.

Just to clarify, John did speak to me before the announcement was released. Still shocked and saddened the man who changed soccer in Canada and my life won't be leading #canWNT any longer. There is no doubt he will succeed in this next chapter as well. pic.twitter.com/iRTvGiofKA

Just sad about this one. Wishing John nothing the best in his next challenge, but still just sad.

I’ve never been more inspired by a head coach then I have with @coachherdman and I’m Canadian so I want the Men’s team to succeed as much as I want our Women’s team to. I believe in our program and the people in it. Great things lie ahead and I’m grateful for my time with John.

1 of the reasons I started searching for my purpose on this earth beyond the pitch….which lead me to becoming a @UNICEFCanada ambassador. Thank you @coachherdman for impacting me as a woman and pushing me the way that you have. All the best with the @canadasoccer #CANMNT pic.twitter.com/RtW7aMAqmu

All I can say is thank you. When I say though it comes from deep deep down inside. 😭…sniffles. All the best 🙏🏾

Still a bit shocked. @coachherdman changed my life, he believed in me and not only gave me confidence in the player I can be, but he instilled it. What he created in our team was authenticity, and deep rooted belief. I see no better fit to lead the men. Good luck and thank you.

My career with @CanadaSoccerEN was the best thing that ever happened to me. @coachherdman gave me a chance & made my dream a reality. He gave me the confidence to believe in myself & my ability. I can’t thank him enough 4 what he has done for the national team & for me.

This is a phenomenal opportunity for him & I can’t wait to see what he does with our men’s side. No doubt in my mind he will make it as successful as what we have become. Thanks coach for so many incredible memories, sad to see u go❤️

But for me, the best reaction was from Allysha Chapman in what is now a deleted tweet (hopefully she wasn’t forced to take it down by those within the CSA as it is truly hilarious and would be very disappointing if there was a heavy handed approach to her for it). She had a couple of funny tweets, but this is the perfect way to leave this piece I feel.

For those who missed Allysha Chapman's tweet about John Herdman pic.twitter.com/ZKkrIDROcg