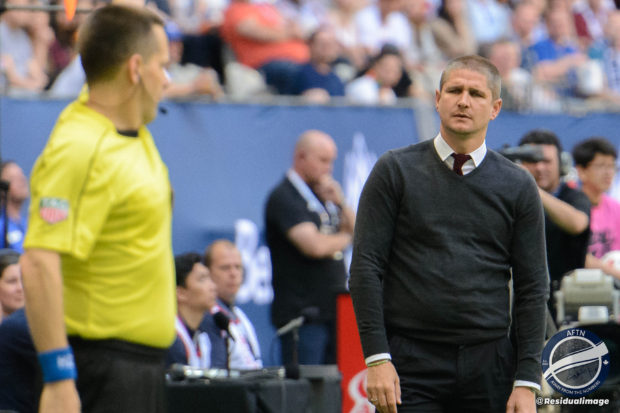 Two embarrassing red cards acted as a red herring for a dismal performance that had its fate seal long before Efrain Juarez and Yordy Reyna resorted to idiotic means to express their frustration. While it’s easy to bash these individuals for what happened at Children’s Mercy Park, the tactical set-up was the reason that the Whitecaps were out of the game by the 16 minute mark.

The ‘Caps coaching staff decided to set the team up in a 3-4-1-2, an adaptation of the 3-5-2 where the three man midfield sets up in a diamond. This attacking twist was to incorporate Reyna in a midfield with Aly Ghazal and Felipe as the defensive pairing. This was the first mistake that the management made.

The second involved the roles of the wing backs.

It is my belief that the plan was to trap the wide players between the wingbacks and the centre backs. What transpired was that the Sporting KC forwards managed to continuously isolate the wing backs one on one.

Just to compound the Whitecaps issues, the midfield was far too narrow, and with the wingbacks being pegged back created acres of space in the wide areas (the same area that Jimmy Medranda scored that thunderbolt). 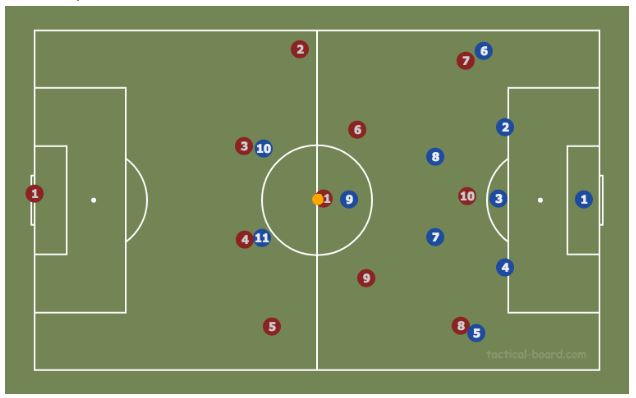 As shown in the above image, Johnny Russell (8) and Salloi (7), continuously tormented Juarez and Alphonso Davies. Any notions of Davies being the ‘Caps outlet forward were quashed by the ever present need for him to defend.

Yohan Croizet and Khiry Shelton’s movement made sure that Ghazal, Kendall Waston (3), and Jose Aja (2) were occupied enough to not stretch out to address the issues out wide.

Roger Espinoza (9) repeatedly found space in advanced positions to quarterback from. Marcel De Jong attempted to help Davies out, but was no match for Russell’s movement and dynamism. Why Felipe was not tighter to Roger Espinoza is a mystery to me.

Routes forward for the ‘Caps were nonexistent once they went down to nine men. But even with 11, there were just two clear chances created. Anthony Blondell was the only real threat. His creation for the Reyna chance and over-the-shoulder volley were the only two highlight worthy moments.

In summary, while I applaud the intention to try something different, the implementation of the 3-4-1-2 against a tried and tested 4-3-3 was the reason the Whitecaps suffered their worst ever loss in MLS.

The usual 4-1-4-1 would have had more players in the wide positions to address the wide threats from the boys in blue. Against a different formation it may have been effective, but against the top-of-the-conference Kansas City, it was an ugly, disastrous, blue confetti covered mess.