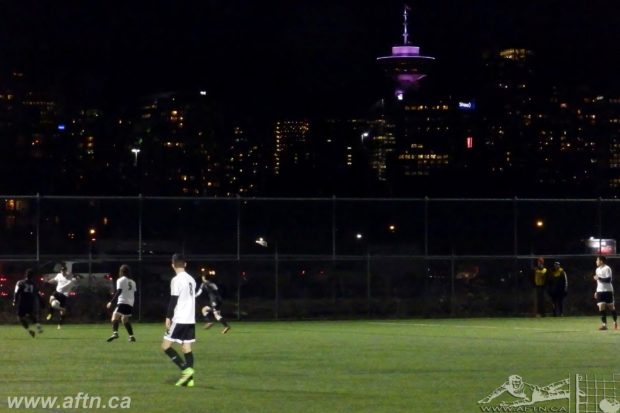 It was a weird weekend in Vancouver and the lower mainland, and we’re not just talking about the bizarre rapidly changing weather systems.

Sunday was wiped out by Snowpocalypse VII, but it was a busy and action packed Friday and Saturday of VMSL league and cup action before that, along with some midweek matches, with lots of goals, some surprises, and some bizarre happenings playing out.

The VMSL Imperial Cup and Division 2 Cup took centre stage for the teams still in them, with All Finals Day coming up fast on April 1st.

The semi-finals are all set in the Imperial Cup with the current top four teams in the VMSL Premier set to battle it out for the trophy.

Coquitlam Metro Ford Wolves thrashed Richmond Hibernian 6-0 on Friday to set up a March 18th meeting Rovers Tigers United in their bid to retain their trophy. The Surrey side saw off Club Inter 6-5 on penalties in their quarter-final tie after the teams were tied at 1-1 after both 90 and 120 minutes, with both sides hitting the woodwork in extra time.

Coquitlam still seem set to be on a collision course with rivals Pegasus SC, who were also in fine goalscoring form on Friday night as they hammered South Delta Royals 7-1 at Newton.

They’ll face West Van in their semi-final after their 2-1 win over Westside SC.

The Division 2 Cup is still at the quarter-final stage, although there’s still two Round of 16 matches to be played after the weather chaos.

We took in a couple of entertaining Second Round matches this past weekend at Trillium Park.

First up was the match of the round on Friday night between Division 2 promotion chasers Burnaby Metro Athletic and unbeaten Division 3 high flyers Coquitlam Metro Ford Lupi. 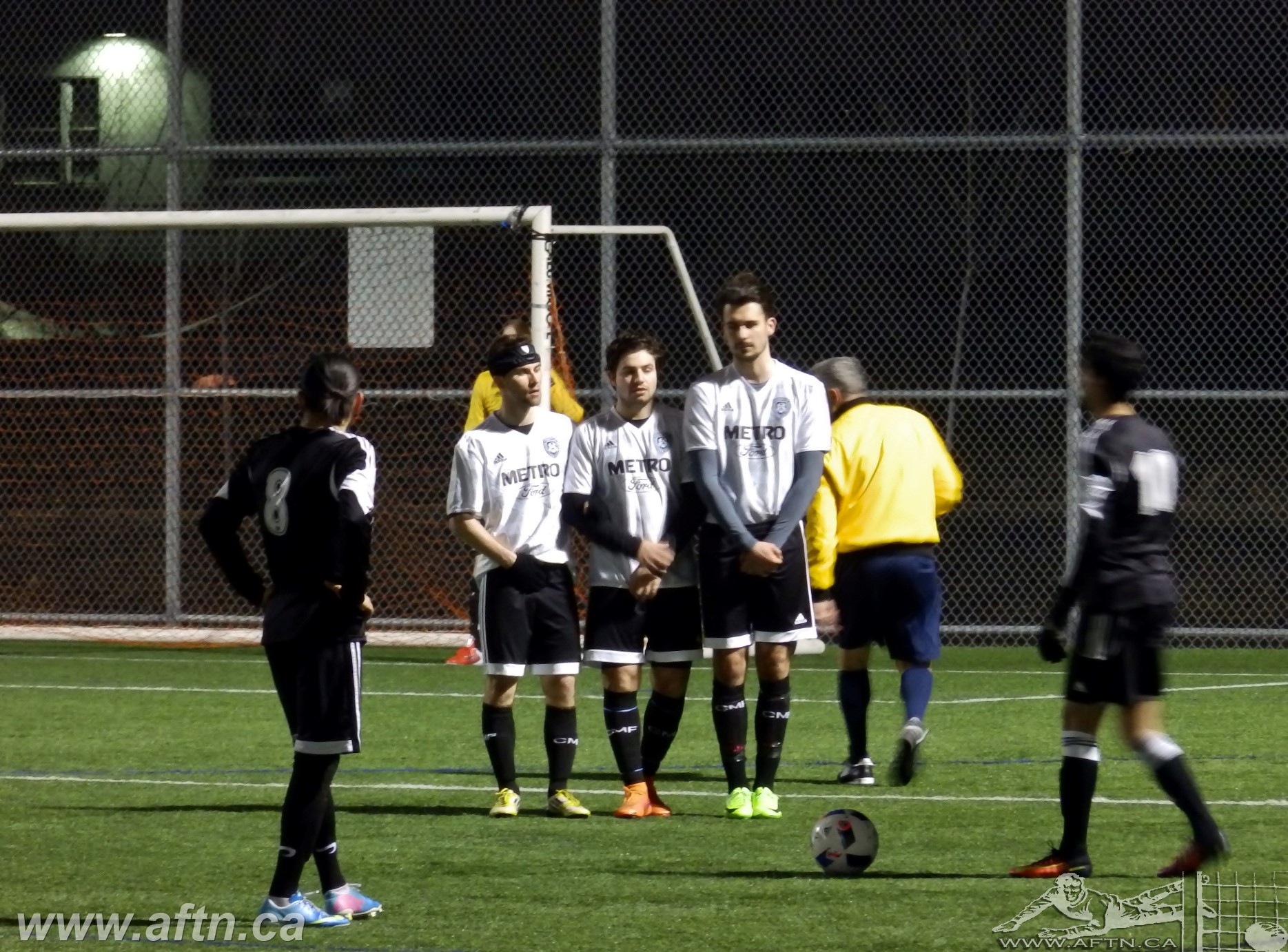 This was either going to be a goalfest between two free-scoring sides or an attacking affair with the defences holding strong. Turned out to be the latter, but was a bizarre night all round.

The game ended up starting 20 minutes or so late, without goal nets, which no-one seemed to have remembered to bring. The game was then delayed for over five minutes when they finally arrived around a quarter of an hour in. Those delays were to prove costly for the Burnaby side, playing at ‘home’ in Vancouver. Do they not have to bring nets to Burnaby Lake I wonder?

Both sides were in attacking mood but couldn’t find a way through and headed in scoreless at the half, but it was Lupi that broke the deadlock, with what proved to be the only goal of the game ten minutes after the restart, with a screamer from a loose ball at the edge of the box.

The game was a bit testy at times, in more ways than one, with Lupi striker Dalibor Plavsic being felled by what looked like a punch to his guts or nuts at a corner, which was missed by the referee.

It was our first time of seeing Lupi this season and they’re an impressive unit, who should take Division 2 by storm next season, but they were put under increasing pressure by Burnaby Metro as the game wore on, who somehow didn’t tie things up from close range allowing the Coquitlam keeper to recover a loose ball when a goal looked all but certain.

You felt that Burnaby Metro were going to get the goal to send the match to penalties, but with three minutes of normal time remaining (and what would have been four or five minutes of stoppage time after a bad injury to one of their players), the lights went out sharp at 10pm, the referee blew for full time, and I really don’t understand why the rules are like this, but the 1-0 result stands.

You can see Lupi’s winning goal, and the moment the lights went out, in the video below:

Lupi’s win sets up a Sunday quarter-final clash at home to fellow Division 3C side Strathcona United, who beat CAT side Metropolitan B 4-1 on Friday night.

Strathcona are seven points adrift of Coquitlam in the league in second place in the division, having shipped 13 goals to them already this year in 6-2 and 7-0 hammerings. Barring a huge upset, the Lupi will stay on course for a league and cup double, like their senior Wolves.

The only other confirmed quarter-final tie takes place at Empire on Saturday afternoon as two Division 2 struggles battle it out for a spot in the semis.

Vancouver Strikers, who sit fourth bottom of Division 2A, will face second bottom 2B side VUFC Rangers, after a comfortable 5-1 win at promotion chasing Snipers FC on Saturday evening. Strikers were three up at half, adding another two before Snipers grabbed a consolation. 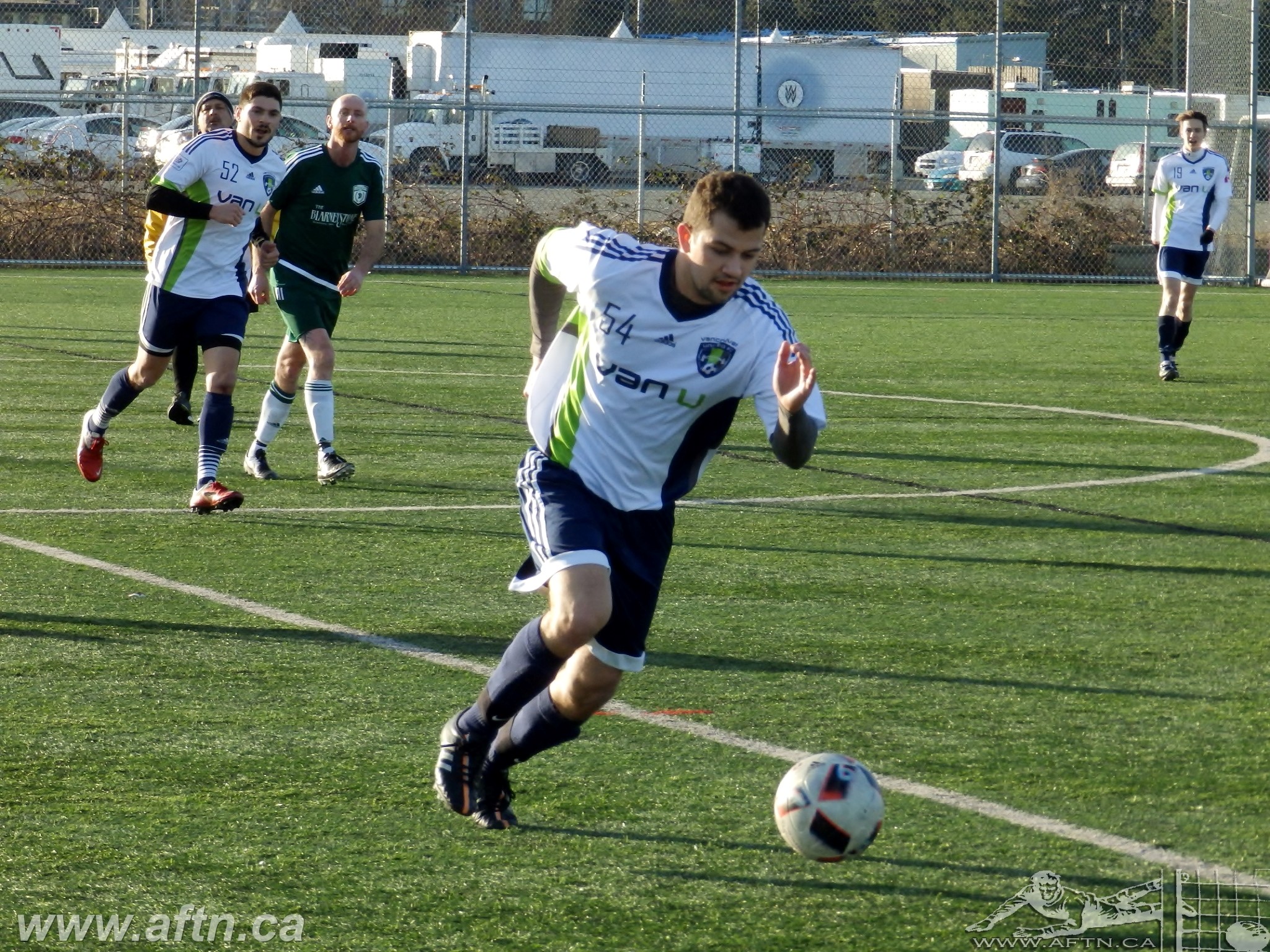 We took in the afternoon match at Trillium between Vancouver Greencaps and Vancouver United Rangers, and it was an entertaining high-scoring affair that was eventually settled by penalties.

United shot out into an early lead before the Greencaps tied things up with a well taken chip over the keeper. The parity was only brief with VUFC restoring their lead moments later before being pegged back level by half time.

The Greencaps were looking the more dangerous side and when they went ahead for the first time in the match, it looked like they’d easily push on and get the job done. And they should have put the tie beyond doubt in the closing minutes but for a blatant hand ball and some terrible refereeing (he was dreadful throughout, unable to keep up with play, wrong on offsides, and more).

As Vancouver United pressed, the Greencaps played a long ball forward that was going over the head of the last Rangers defender and would have put the ‘Caps striker in on goal. The defender jumped and batted the ball away. Ref waved play on but the ball was redirected so the chance had gone. He called it back for a free kick but no sending off!

That chance to kill the tie off was crucial, and full credit to the Rangers, who battled till the end, getting their reward in the closing moments. Vancouver United won a free kick on the edge of the box, for a blatant elbow to the head that also apparently didn’t warrant a card, and from that they tucked home what looked to be an offside equaliser to send the match to spot kicks at 3-3.

Both teams scored with their first two attempts, then saw their next one saved, with each keeper coming up big. Vancouver United went ahead 3-2 before their keeper pulled off another save to give them the chance to win the tie. United’s fifth penalty was coolly dispatched into the bottom right corner to take the shootout 4-2 and send them through to the quarter-finals.

You can see the full shoot-out in our video.

13th Legion will play Meraloma on Friday and Shaheen FC take on Gastown FC in their Round of 16th matches for the right to face NVFC Norvan Storm and Cliff Senior Cobra respectively in next week’s quarter-final ties.

In league action, Pegasus’ excellent recent run, which had seen them closing the gap on runaway VMSL Premier leaders Coquitlam Metro Ford Wolves to five points, came to an abrupt end with a 3-2 loss at home to Croatia SC last Wednesday. With Coquitlam also having two games in hand, any lingering hopes of a title battle could very well be completely extinguished (if they’re not already) when the two teams meet on Tuesday night.

There does seem to be some life in the relegation battle, however, after North Delta SC grabbed six points in four days with a 4-1 win over Rovers Tigers United on Wednesday and a 1-0 win at last placed ICSF Columbus on Saturday. That moved second bottom North Delta to within three points of third bottom Pacific United, with four games left to play. Pacific United have a staggering six games in hand though after a rash of postponements. How and when they can make those up is the big question now. Six point matches a possibility?

We took in bits of the Croatia SC v EDC Burnaby match at Trillium on Saturday afternoon in-between the Division 2 Cup action. 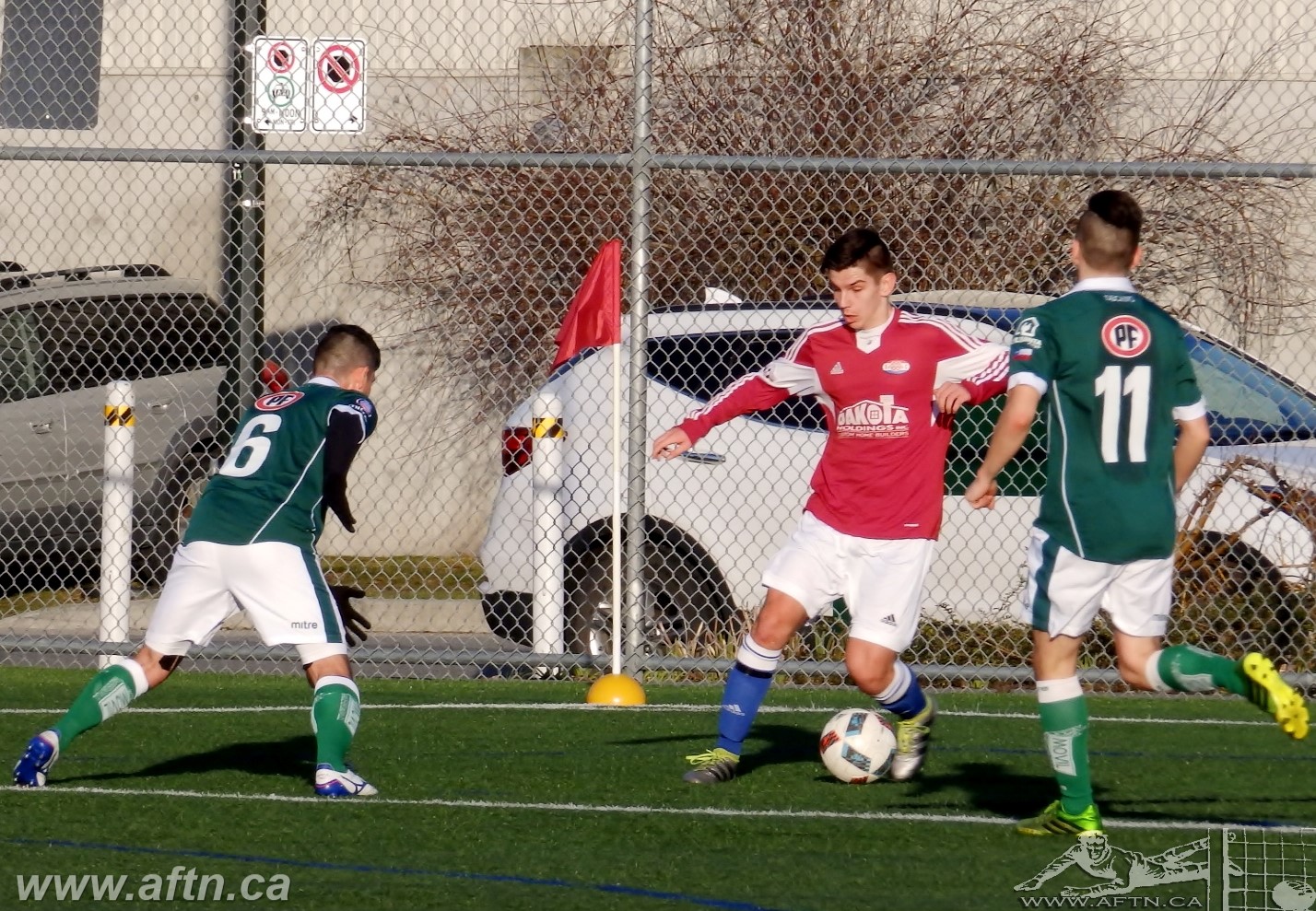 It was an entertaining game between two middle of the table sides, with Croatia going into a 1-0 first half lead from the spot before EDC tied it up. Croatia pushed hard in the closing stages grabbing two late goals, the third in stoppage time, to come away with the 3-1 win and send their boisterous fans home happy.

Division 1 leaders Rino’s Tigers were held to a 1-1 draw by second placed NVFC Norvan Lions on Saturday up at Point Grey. That keeps Tigers eight point lead at the top intact, but the Lions have two games in hand, so still a lot to play for down the stretch.

But it’s getting interesting just behind Norvan in the table too, as the promotion battle heats up.

CCB Guildford’s 3-1 home loss to Binger’s Army on Friday night allowed Campo Atletico to leapfrog them into third place following their own 3-1 win on Saturday afternoon over bottom side Metropolitan, who had been on a bit of a run in recent weeks as they try to beat the drop.

In another somewhat bizarre game, Campo were holding a 2-1 lead late on, when a Metropolitan shot went into the side netting. The officials gave a goal, to tie things up and potentially give Metropolitan a critical point that would have moved them off last place. But to their immense credit, Metropolitan told the officials that the ball hadn’t gone in and the ‘goal’ was then ruled back out. Then to stick the knife further into their back, Campo went up the pitch and added a third. Amazing fair play by the Metropolitan guys and horrendous refereeing to being with.

Campo are now one point back of Norvan, but having played two more games. The two teams meet in North Vancouver on Sunday night in what should be a cracker of a match at Sutherland Secondary School (5pm kick off).

If you fancy heading out to some local action this weekend, you can find the
full schedule for Friday, Saturday, and Sunday’s matches HERE.

And catch up with all the latest VMSL and local soccer chat over on TakeThePiss.com.