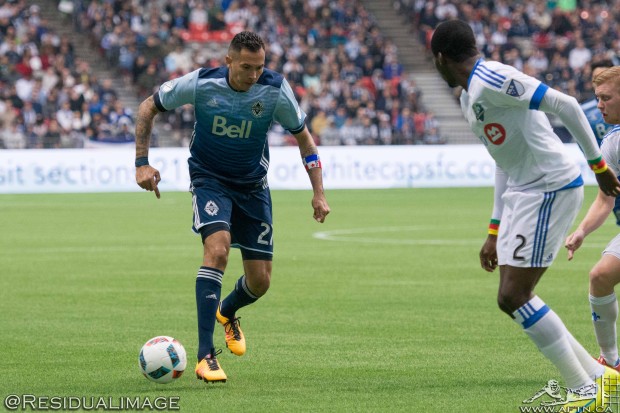 Every month Vancouver Whitecaps and Panama striker Blas Pérez will pen a few lines about what’s been happening as a player on the pitch and give us a personal look at the man off the pitch. If there’s anything you’d like Blas to talk about or find out about Super Ratón, then let us know in the comments and we’ll see what we can do. If you missed his first column for us, you can read it HERE.

It’s been a tough start to the season for the team.

We just need to keep on working. The talent is there, it’s just a matter of time for goals to come on. Ourselves and the fans know very well what this team is capable of doing when we take advantage of the chances we create.

Unfortunately I had to miss the last match in Salt Lake after taking a knock in training.

It was a precaution. I don’t want to miss any game, but we decided not to take any chances of suffering a serious injury that could take me out for a couple of weeks.

Now I’m feeling good and ready for the next match.

And that next match will be a special moment for me as I face my old team.

If I had to write some memories about my time in Dallas, maybe I wouldn’t finish writing. All I can say is that me and my family had four great years on Dallas, but now I’m on Vancouver and focused on this season with the Whitecaps.

About the game, it will definitely be a very special night. FC Dallas is a good team. Facing my former teammates will be a huge motivation. For 90 minutes they will be my rivals and my job will be to help my team get the 3 points.

I said during the week that it would be nice to get a run of games so that I can find my groove. I missed time last month as I was away with Panama to play two World Cup qualifiers.

All World Cup qualifying matches are important, but these matches against Haiti we considered them as the most important matches of this round. We wanted to take on the 6 points, in order to face the last two matches of the round on a good position on which we only depended on ourselves. We took 4 points, had great matches and have great chances of advancing to the next qualifying round.

I haven’t been able to see too many new places in Vancouver since last time.

I’m still learning about the roads, plus the fact that I went off to international duty with my national team, but I’m trying to get to know new places and stuff around Vancouver.