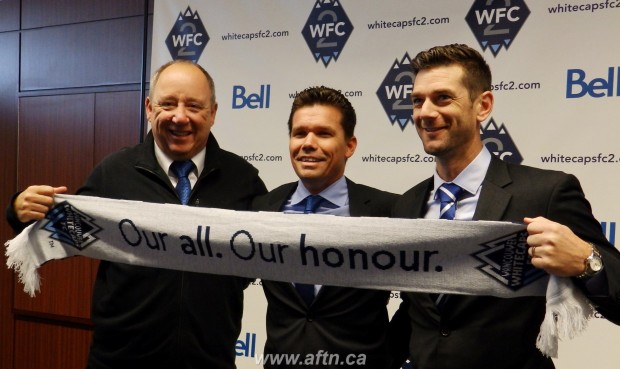 On Friday it was announced that Alan Koch will be the first USL PPO head coach for WFC2. He is a familiar face to the current first team coaching staff and is known around the local soccer scene. He has been a staple of soccer the past seven years at SFU and hopes to continue his success in his new role with Vancouver Whitecaps.

Lets now take a look at The Good, The Average and The Bad of the Alan Koch hiring.

Ability To Work With Younger Players

With the Whitecaps wanting to ideally field a USL PRO team that will consist of mainly players between 17 and 24 years old, Koch’s history and experience will make him a good candidate for this job. These players are going to have to be pushed just right, there will be times when Koch will have to be brutally honest when they are struggling but there will also be times where he will have to be more of a friend that encourages the player than a coach.

With young Canadian players like Marco Bustos, Kianz Froese, Caleb Clarke, Marco Carducci, Ben McKendry, Sam Adekugbe, and maybe even a Residency player like Dario Zanatta, their development this season in USL PPO is key. This can’t be like when they sent players to Charleston Battery where it was a waste of the player’s year and the player and team didn’t benefit from it.

This has to work. This has to be benefit the first team, Residency and most importantly the players themselves.

Koch is the safe bet for the front office to hire. He is known to the coaching staff and players and he knows what the direction of the club under Carl Robinson is. This can be a gateway to maybe a MLS job in the future for Koch and we know he will give 100%.

I hope supporters and casual fans realize that this team was not started to win USL PRO championships. Sure winning one would be great for the club but that’s not the main goal.

That goal is to build up young players, Canadian or not, to succeed enough to become a mainstay on the first team.

With the mandatory roster rules of 50% Canadian and 6 out of 11 of the starters also being Canadian, these rules shouldn’t be a problem for the Whitecaps. But with these young players getting these minutes this doesn’t mean that it guarantees success this season. For club or player.

Fans will have to be patient and enjoy the level of play that the USL will bring. It will be a chance for the fans to support soccer on a level where only those supporters who have followed Residency games will know. It would be great seeing a full Thunderbird Stadium supporting, chanting and cheering on these young players, but it may take a bit of time for those numbers to be hit.

Koch’s style of play will be vital to both player development, a winning team on the pitch and bums on seats.

What If It Doesn’t Work

What if it doesn’t work? What is the back up plan?

All their eggs are in the basket for this team. If the team struggles and the fans aren’t patient, the support at games will drop. This team has be supported. The players will have to feel apart of the community just like the first team.

What if this doesn’t help players move up to the first team?

Sure you got players like Bustos, Adekugbe, Froese, Clarke and Carducci that will get first team minutes this season. They will play Canadian Championship and CONCACAF Champions League games this season and get their chance. But what about other players on the USL PRO roster? Will they get a chance to be in a gameday 18 and/or a MLS contract? What will they have to do to get that chance?

In the long run I believe this will be a good fit for Koch, but fans will also have to be patient and look at the long term goals moving forward.