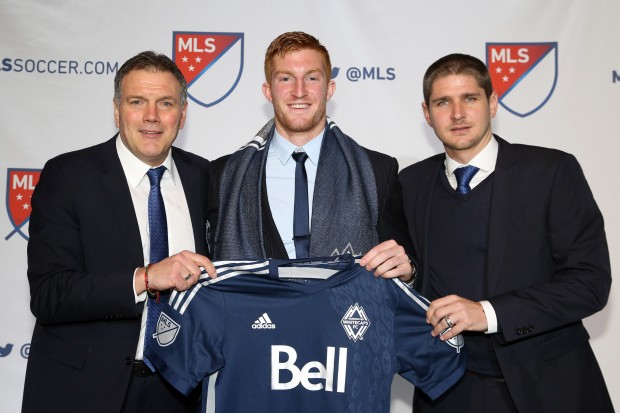 Vancouver Whitecaps continued to shore up their backline with the drafting of St John’s University centreback Tim Parker in Thursday’s MLS SuperDraft.

With Andy O’Brien, and seemingly Johnny Leveron, moving on, coach Carl Robinson has already stated his intention to carry five players in the centreback position for the season ahead. Parker now takes that number to four, following the loan signing of Uruguayan Diego Rodriguez on Wednesday.

Described by Robinson as “the best player at the combine”, the Whitecaps got the player they wanted from the first round of the draft, despite their lowly 13th place selection and the Whitecaps feel they have a player who can challenge for a first team spot right away, whilst also getting valuable developmental minutes in the ‘Caps new USL PRO side.

For Parker, the lure of coming to a MLS team that gives younger players real opportunities fires him up and he is already targeting 10 to 15 starts this coming season.

Parker was keen to impress at the combine and he did just that.

“I went down there with kind of a chip on my shoulder and a statement to make to coaches of the league and the league itself that I wanted to be a first round pick,” Parker admitted in a conference call on Thursday afternoon. “I really wanted to make coaches happy with the way I played and overall I think I am happy with the way I played. I think I performed well and I showed up fit and tried to be as sharp as I could every day.”

It worked for Carl Robinson and the 6 foot 2 defender, who has never even been to Canada before, comes to Vancouver after four years and 79 appearances with the Red Storm, captaining St John’s in his Senior year.

So for those of us that have never seen him play, how would he describe himself as a player?

“I think I’m a hard working guy who knows what his job is and is willing to do anything he can to complete it,” Parker told reporters following his draft selection.

He followed that up in a conference call with local media later by adding:

“My kind of playing style I’d describe as physical. I think I have some physical attributes that I can contribute and also I’m one of those defenders that likes to be on the ball, so whether that’s playing out of the back or being an option to other players I think I can add that dimension to the Whitecaps this year and I hope that I’m given the opportunity to.”

Having started all but one of his appearances with St John’s, Parker will now find himself in the position that Christian Dean did last season – of not being a regular starter and having to show patience as he waits for his chance.

What will benefit Parker though is the chance to play valuable USL minutes and show his worth there as he challenges for MLS minutes.

“One of the most important things for a younger player is to be able to get minutes,” Parker said. “Without getting minutes, it’s very hard to develop as a young player, so I think that because Vancouver does have a USL PRO team, it’ll give me the opportunity to get minutes, to get experience and hopefully that kind of experience and minutes can help me translate to the first team.”

Parker is coming to a Vancouver side however that is not afraid to give young players minutes, a fact he is very aware of. With the ‘Caps facing a busy 2015 in MLS, Champions League and Canadian Championship action, Parker will definitely see minutes with the first team, and coming to a club that’s manager consistently gives its younger players a chance excites the 21-year-old.

“I know they’re a young team and they brought me in here as a young guy,” Parker said. “It gives me a lot of confidence. It shows he trusts his younger players. It shows he instils faith and that’s important for a younger guy going into an organisation.”

“It doesn’t matter about age, it matters about the way you perform. I think, for me, that’s something I have to have in my mind going in to this.”

The Whitecaps courted Parker early and were the first team to talk with him down at the combine. Bobby Lenarduzzi described his interview as hitting a “home run” and it was a connection also felt by the player.

“When I met with the coaching staff, I think we got along very well,” Parker said. “We connected. For me, it was something I thought could be a possibility. I thought the meeting went very well. They were the first team I met with and I could feel some interest and connection right away. For me, it was a very important and very positive first meeting for sure.”

The character and mentality that he showed in that chat that cemented Robinson’s interest in him, with a lot of the chat focussing on what motivated Parker and what the player was like off the pitch.

“We got to know each other pretty well personally,” Parker told us. “I was able to get to know them and they were able to get to know me on a more personal level. Kind of know the kind of person I am, not only on the field but also off the field. Our ideas of soccer and the game and what I believe I’m capable of over the next couple of years kind of clicked.”

“Through this process, coaching is going to be very important to me growing as a player. I’m very excited to be working with the staff.”

So just what does make Parker tick off the field?

“For me, when I’m not playing soccer I’m a big family guy,” he says. “I’m a big friendly guy. I love hanging out with my family and my friends. being from New York I love to spend time at the beaches but also I love seeing movies and I love doing anything kind of outdoorsy.”

He’s certainly coming to the right place for the latter.

There is no doubt that Parker is an intelligent player with his head firmly screwed on. A lot of that comes from his upbringing. His mum is a registered nurse in New York and his dad is a police officer in Long Island. Neither played soccer themselves, but both have helped him in his chosen career path.

“My mum and dad have always kept me honest. I’ve been humble but I’ve also been able to be proud when I can be. The inbetween areas, are always pushing me. They always make sure I have the right head on my shoulders.”

So what would Parker class as a successful first season in MLS and with the Whitecaps?

“I know that over the course of the year the Whitecaps don’t only play in MLS but they also play other games outside of the league, like the cups and whatnot,” Parker said. “For me, just getting a couple of starts. 10 to 15 starts in MLS would be massive in helping me grow as a player.”