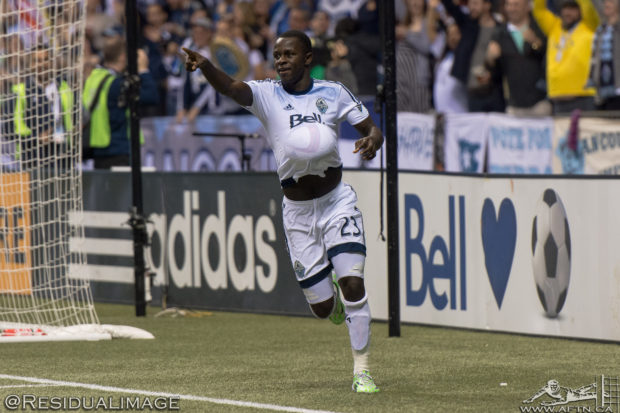 Well who ever said defence wins championships, probably didn’t mean it like this. It wasn’t pretty at all for the defenders on both teams but it was probably the most entertaining back and forth game the Whitecaps have had in a long, long time.

After going up two goals in the first twenty minutes of the game you had that feeling that there were still way more goals on the pitch for both teams. Even after the Jozy Altidore miss on the penalty kick, you knew it would be a difficult game for David Ousted to keep the clean sheet.

Sure enough, two Toronto FC goals, the game was tied and the action was back and forth.

But all it took was a great inside outside play by Kekuta Manneh on ex-Whitecap defender Steven Beitashour, where he made him look like a flailing pylon, and the Whitecaps were up 3-2. A few minutes later Pedro Morales scored a great goal that would end up being the game winning goal to put the Whitecaps up for good.

Fraser Aird saw red for a nasty challenge that brought a second yellow, and Toronto hit back with a third to make it 4-3 and a nervy ending. But the ‘Caps held on for the win and climbed the standings.

Three games, seven days and nine points later it is now time to let these players recharge and get ready for a huge clash next week against the Portland Timbers.

But before we can look ahead, it’s time to look back one last time at “The Good, The Average and The Bad: Manneh Answers But Manneh More Questions Edition”….

Sebastian Giovinco might get all the headlines in the Toronto media for his great game but it was the young Manneh who matched him, with two goals and an assist in the game. Giovinco’s goals may have been prettier but being pretty only counts in beauty pageants.

Manneh starting the game next to Erik Hurtado was a great plan from Carl Robinson and they started off the game with a bang. They ran at will at Toronto defenders and were having their way with them. From great hustle off a sloppy pass that lead to Manneh’s first goal, to the superb move on Beitashour that gave him the second, the young Manneh has seemed to have found his role on this club.

We have seen bouts of this effort from Manneh in the past but it usually doesn’t last and he fizzles out after a few games. Let’s hope this effort and results last this season and he has his breaking out party for this team moving forward.

With Kendall Waston having to sit out this game due to yellow card accumulation, it left Robinson with few options at the centre back roles. It was left to Parker and Kah, and considering who they were playing against, they were pretty average at best.

On the first Giovinco goal it wouldn’t have mattered who the defender was. That goal was going in anyways, no matter the effort shown by Parker and Kah. The second Giovinco goal was a little more fault from the centre backs. Kah was able to jump at the attacking Michael Bradley but didn’t get the timing right going to the ground to block the pass. With Kah being too slow it left a gap between him and Ousted that Parker wasn’t fast enough to get into and stop Giovinco on the shot.

The good thing Kah did was earn a yellow card while talking in Jozy Altidore’s ear on the penalty kick, He made sure Jozy wasn’t able to put ball down right away by standing on the penalty kick spot. Even after he cleared the box he was still talking to him and the referee gave him a yellow card for his actions. We will never know if Ousted would have stopped the penalty kick if Kah didn’t do what he did but you have to think the time Kah wasted for his keeper played a factor in the save.

The first yellow Aird received was a joke. Giovinco sold it like an award winning actor. Wasn’t even touched, fell like he was shot and got the referee to book Aird with the soft yellow.

The second yellow was a whole different story. He fouled Jonathan Osorio with a nasty stomp on the ankle that looked really bad with every replay that was shown. He was so late to the ball he had no reason to follow through like he did.

I wouldn’t be surprised if Aird is shown an extra game suspension by the MLS Disciplinary Committee after they review it midweek. It was a ugly play and their is no room for that in the game.

With Aird missing a minimum of next weekend’s game against Portland, will we see Jordan Smith get the start? Or do we see Parker get moved to right back and Waston and Kah played at centre back?