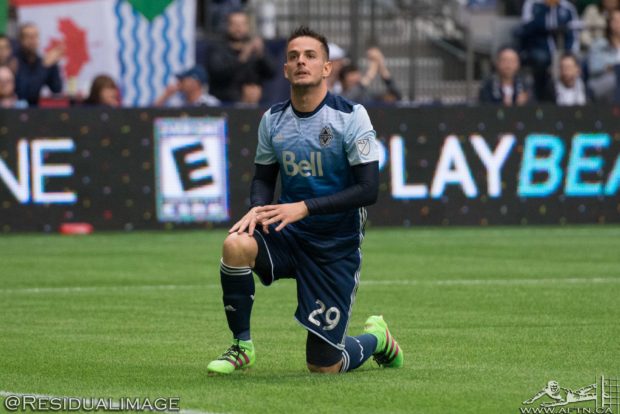 Another Vancouver Whitecaps Designated Player has moved on, ending what was another high profile signing that didn’t quite pan out as everyone hoped.

Octavio Rivero’s transfer to Chilean side Colo-Colo was finally confirmed on Wednesday after a couple of weeks of rumblings. It’s clearly best for both parties that he moved on. He didn’t seem to be enjoying his football here all that much any more and the Whitecaps had been left checking exactly what it said on the tin when they signed him because he certainly was no RonSeal.

It may be harsh to call Rivero’s time in Vancouver a bit of a busted flush, but his goalscoring record is not what was needed when Carl Robinson signed him before the 2015. With 14 goals in 52 appearances in all competitions, Rivero was not the answer to the Whitecaps goalscoring needs and his departure leaves the ‘Caps with perhaps an even bigger hole to fill than the one the Uruguayan was first brought in to remedy.

Rivero’s transfer frees up cap space, a roster spot, an international spot and, perhaps most importantly, a Designated Player spot. We say perhaps because the Whitecaps track record with their Designated Players has been pretty awful.

Eric Hassli started it off as he crashed and burned in spectacular fashion, leaving us with some incredible highlights (both goals and sending offs) and having seen his goals dry up. Mustapha Jarju became MLS’ first African DP and brought a drought worthy of his continent. Barry Robson came and went in red-faced, arm-waving fashion, and is now retired and I believe working on a wind farm in the Scottish highlands. Kenny Miller at least hung around for more than a cup of coffee, but the lure of that bleak, post-nuclear wasteland that is Glasgow was just too much.

For all the criticism Miller got while he was here, when he left, so it seemed did regular goals from a striker. He’s never been properly replaced. The Whitecaps search for a goalscorer was not filled in the summer of 2014. Rivero was meant to have filled it in 2015, and although he came out of the traps like a whippet with a firework up his ass, the sizzle was soon extinguished and everyone waited for the explosion that never happened.

There is of course no guarantee that Rivero’s immediate replacement will be a Designated Player. We’ve already seen Masato Kudo and Blas Perez come in to help him out this season on non DP contracts. And we still have Erik Hurtado. Yeah, don’t start me on that one right now.

The choice of who does become the Whitecaps next DP is massive in terms of the message it will give fans and people looking in as to the future direction, and likely success, of the club.

Now, we’ve long argued that a rash of DP’s (I think that’s the official term) does not guarantee success. You just have to look at the mess that it New York City FC to see that. We’ve also said before that going for an expensive, big name signing can do more for locker room unrest than it can do for the goals tally.

But is it a case of you get what you pay for?

Sometime yes, sometimes no. We all know certain DP’s around the league that fall into both categories. Sometimes you get a guy that can contribute but misses so many games through either injury or not wanting to play on turf.

The general consensus, and it’s one that isn’t going to be shaken any time soon unless the powers that be open up the chequebook, is that the Whitecaps are cheap. They’re not going to go and spend a few million on a player when there’s bargains around.

But again, you get what you pay for. You can either splash that cash and get a proven goalscorer from a top league, or pick up an up and comer who wants to put himself in the shop window but who may not cut it in a league like MLS, with all it’s quirks and anomalies.

Both are massive risks. The Whitecaps have tried the latter, perhaps now is the time to take a gamble on the former.

Right now, I’m of the opinion that I don’t care where he comes from, how well known he is, and how much or how little he costs, I just want a proven goalscorer. Every club and manager and fan does of course, all over the world. That’s why they’re in demand. That’s why unless you uncover the most amazing unknown gem in the footballing world, you’re going to have to pay for it.

The Whitecaps produced their best ever MLS season without having an actual prolific marksman. The defence saw them through and goals were scored by committee. This year the opposition are seeing through the Whitecaps defence like it isn’t even there. This year, we need that prolific marksman to help out the backline if we’re to even make the postseason.

Rivero was averaging a goal every four MLS matches (based on minutes it’s one every 3.4 games). At that rate you’re looking at 8 to 10 goals a season. Not the best striking record in MLS, not the worst. But also not really worthy of a DP tag, albeit a low one as a young DP.

Now we’re not demanding that the ‘Caps have to go out and find a 20+ goal a season guy. It would be nice and preferable, but that’s the remit for every team. Not many get it. We do desperately need a double digit guy.

We have had prolific before of course, well for one season, in Camilo. Is it realistic for the Whitecaps to attract another Golden Boot challenging striker? Of course it is. Look how many chances we create that go a begging or are sent into the pigeons by people like Hurtado. Getting a player like that might not even mean splashing too many millions to get it, as others in the league that hit those heights (Kei Kamara being the most recent example). But it might.

A player’s success in another league does not guarantee success here, but it’s an indication that he has something in his locker that he can produce prolifically if the circumstances are right. Surely part of that is creating a plethora of chances? We do that. Again, we need the right guy to finish them, and that might not come cheap.

Likewise, bringing a player in from a top league where he hasn’t had a great goalscoring record, but saying it’s a tougher league so he should be fine here, means nothing either.

Mexican striker Enrique Esqueda has done a wonderful job in trying to market his desire to be a Whitecap via Twitter. His career record is around a goal every 5.1 games, which is worse than Rivero. He’s not screaming DP quality to me either. But, I know, I know, it’s tougher leagues etc etc.

So whether the eighth Whitecaps Designated Player turns out to be a striker or not remains to be seen. But what he does need to be, however, is a difference maker.

We need to bring in a guy that gives us the edge, gives us more than what we currently offer, creates that extra chance, scores those extra chances, earns us three points when it looks like one or none. He needs to be the player in blue and white that makes the real difference. What Pedro used to be.

He needs to be experienced to help this young side. Proven, tried and tested at the top level, with a few good years left in him and hunger to go out with a bang and not just a pay cheque.

As always, the Whitecaps will get what they pay for.