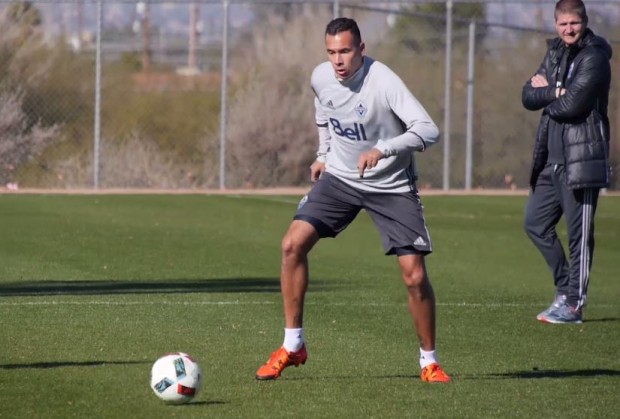 After revealing the news on January 29th that Blas Pérez’s move to Vancouver was close to being a done deal, and after Perez joined the ‘Caps down in Tucson for their preseason friendlies, playing against New England on Saturday, all the necessary paperwork was completed on Monday afternoon and the Panamanian international is a Whitecap.

It’s a day many ‘Caps supporters probably never envisaged, and as Jay Duke has already mentioned here on AFTN, it’s a move that’s certainly polarizing amongst some of the fanbase.

But he’s a Whitecap now and Carl Robinson is certainly convinced that his work ethic, contribution and commitment both on and off the pitch will win the doubters over.

In the meantime, Aaron takes a look at “The Good, The Average, and The Bad” aspects of the signing….

With tough and hard to play against starters like Kendall Waston and Matias Laba on this roster, grittiness was much needed off the bench.

The Whitecaps have finesse players like Octavio Rivero, Masato Kudo, Christian Techera, Pedro Morales and Kekuta Manneh. What’s been missing is that player in the squad that opposing teams know will get physical and push them around in the box to fight for positioning.

Pérez’s job isn’t to be the nice guy on the pitch. He gets paid to be that player that no one wants to play against. Does he make enemies with fans around the league? Yes he does and he has here.

But will those Vancouver haters love him if he crunches Robbie Keane or Clint Dempsey with a hard tackle, make them take a retaliatory red card or puts away a few goals to win some grungy hard fought game?

It might take some time, but he will become a fan favourite here with most supporters.

Expectations On The Pitch

Pérez is a 34-year-old player. He doesn’t have to be the main guy on the pitch and will be the third striker option behind Rivero and Kudo. His job will be to come onto the pitch late in games, run at tired opposition defenders and be an absolute handful. Much like Manneh being the speedy super sub, attacking defenders a few seasons back.

Pérez will be able to use his grit and nasty playing style to get those dirty goals that the Whitecaps where missing last season. He’s unlikely to be a 10 to 15 goal player, but it would be nice if he surprised us all and was able to do just that. Although his form and goals dipped last season, he’s shown he can score in MLS.

I expect him to be in the 5 to 10 goal range in all competitions. Will he get a few yellow cards, maybe some red cards, and get under the skin of opposing teams so they take stupid cards? I hope so.

From everything I have read from FC Dallas supporters on Twitter, he will be missed on and off the pitch. He is a top player. One that is a fan favourite when he is in your teams’ kit and public enemy number one when he is playing against your team. Let’s hope that trend continues in Vancouver.

This is a hot button issue for some Whitecaps supporters. Do the majority of Vancouver fans welcome him here? Well here are the results of our initial brief Twitter poll on the subject. 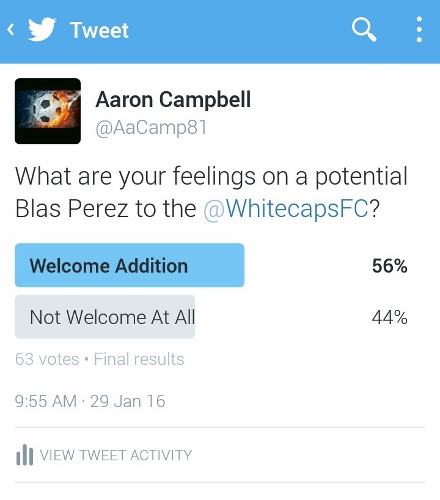 A narrow majority for those welcoming the signing. Once the news had time to settle in to people’s mindsets, we ran a second poll and got a far most positive response. 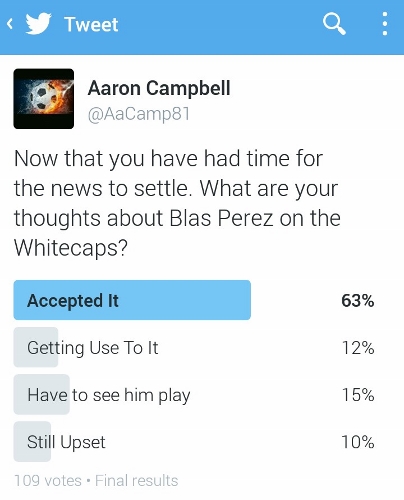 There are still fans that will not be happy with Perez coming to Vancouver though.

Pérez has a history with the Whitecaps faithful of being a nasty, gritty and downright pain in the ass player. People need to realise his job as a professional football player is to get under the skin of the players he is playing against.

Has he taken it too far in the past? Yes, he undoubtedly has. Do fans of teams he’s played against hate his guts? Yes, they probably do. Do Dallas supporters love him as a player when he played for their team? Damn right they loved him in their kit.

That being said if bringing Pérez into this organization makes it so you refuse to support this team this season, that is your decision and you will be missing some great soccer this year. I hear that the Vancouver Canucks have tickets available for games now. Pretty cheap I hear also. Or maybe if you still want to support the Whitecaps, but not the first team, you can head out to UBC and cheer on the USL Whitecaps 2 side.

For the rest of you fans that don’t like this move, let me say this. Have faith in Carl Robinson. Players on this team and around the league respect him. He would not jeopardize the mood in the locker room if Pérez wasn’t a good teammate on and off the pitch and the character of player he is looking for. Robinson would only bring him in if he was a good player, a good teammate and a good person. It might be hard for some to see that, but Robinson clearly does.