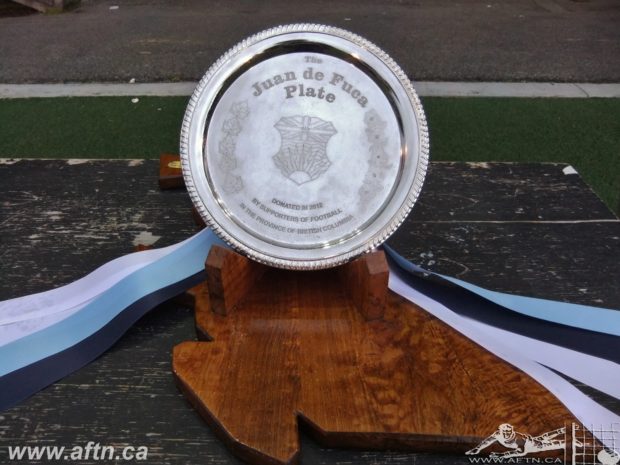 After an absence of three years, the Juan De Fuca Plate is back as part of the BC footballing landscape.

The Juan De Fuca Plate was established in 2012 to honour and reward the best PDL team in British Columbia each season, based on head to head matches between the sides that year.

The supporters initiated trophy saw 24 fans of Vancouver Whitecaps and Victoria Highlanders donate funds to purchase the plate, a base made of BC maple in the shape of the province, and a banner to be displayed at matches.

The future of the trophy remained unclear after the ‘Caps wound up their PDL team when they launched WFC2, but now, after sitting out the 2015 and 2016 seasons, the Juan De Fuca Plate is back with a bang and will be contested by TSS Rovers and Victoria Highlanders in three matches over the next two weeks.

The first Plate was contested during the 2012 PDL season, with the first ever match played between the Highlanders and the Whitecaps at Royal Athletic Park in Victoria on May 13th. The inaugural Plate was eventually won by the Whitecaps in a battle that went right down to the wire. 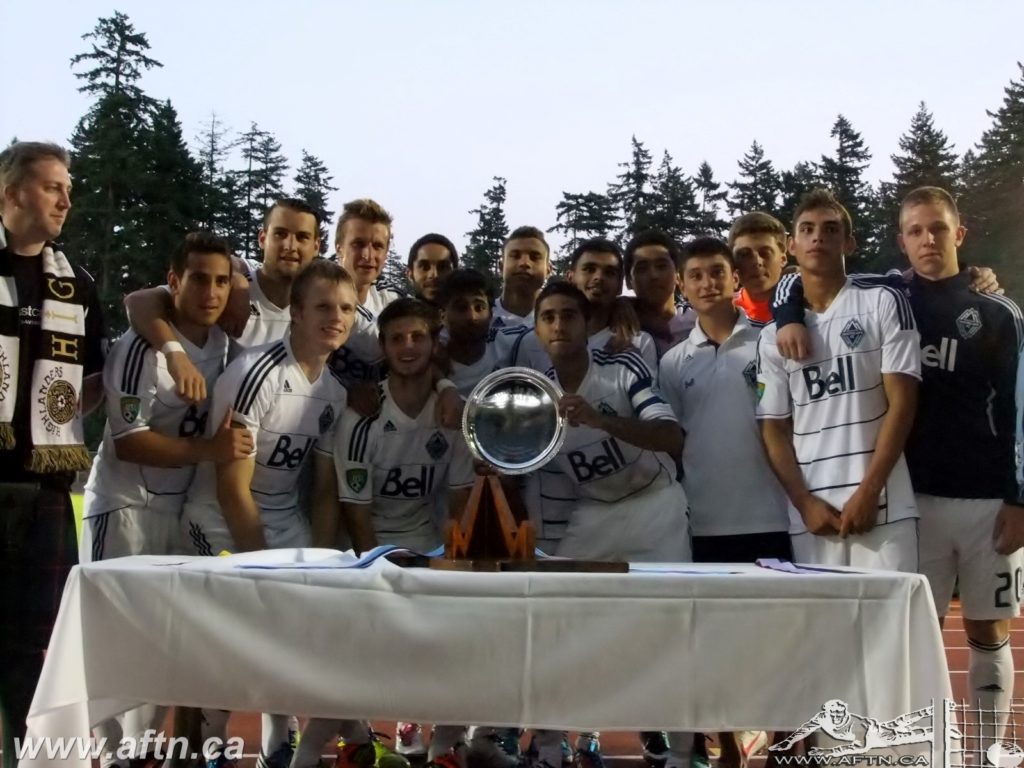 That season included the third BC team in the league, Abbotsford Mariners, in what was to be their last season competing in the PDL, with teams playing each other three times.

The ‘Caps and the Highlanders kicked things off with a 1-1 draw, with Vancouver’s Long Tan scoring the first goal in the competition’s history. Both teams then recorded a win away from home, with the ‘Caps winning 4-2 in Victoria on June 9th and the Highlanders winning 2-1 in Richmond on July 8th.

Abbotsford were the whipping boys of the competition, shipping 15 goals in their first five matches, without scoring even one of their own. But they saved their best performance to last, shocking Vancouver to go 1-0 up at Swangard Stadium on July 12th, in a match the Whitecaps needed to win to secure the Plate.

A subdued ‘Caps crowd witnessed an incredible goalkeeping performance from current WFC2 keeper Mark Village to keep the home side at bay, but Cam Hundal and Gagan Dosanjh finally got the breakthrough in the final ten minutes to give Vancouver the 2-1 victory they needed. 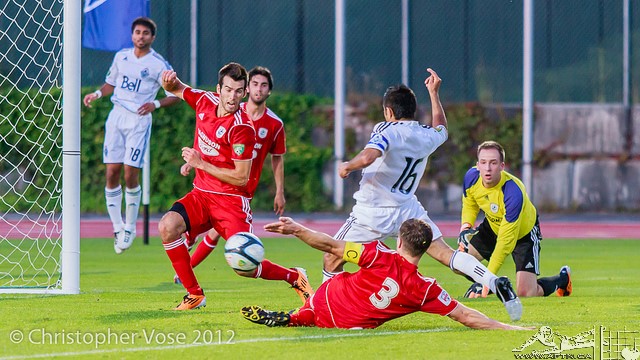 That goal gave Whitecaps captain Dosanjh the pleasure and privilege or lifting the first ever Juan De Fuca Plate..

Those nine matches in the 2012 season were played at five different stadiums, attracting 3,514 fans, and leaving a lot of lasting memories.

The 2013 season saw the Plate down to a two team competition after Abbotsford Mariners left the PDL to play in the PCSL. This meant the Plate was now contested over three matches, two of them in Vancouver and one of them in Victoria, to determine the winner.

And the Whitecaps made it back to back triumphs. 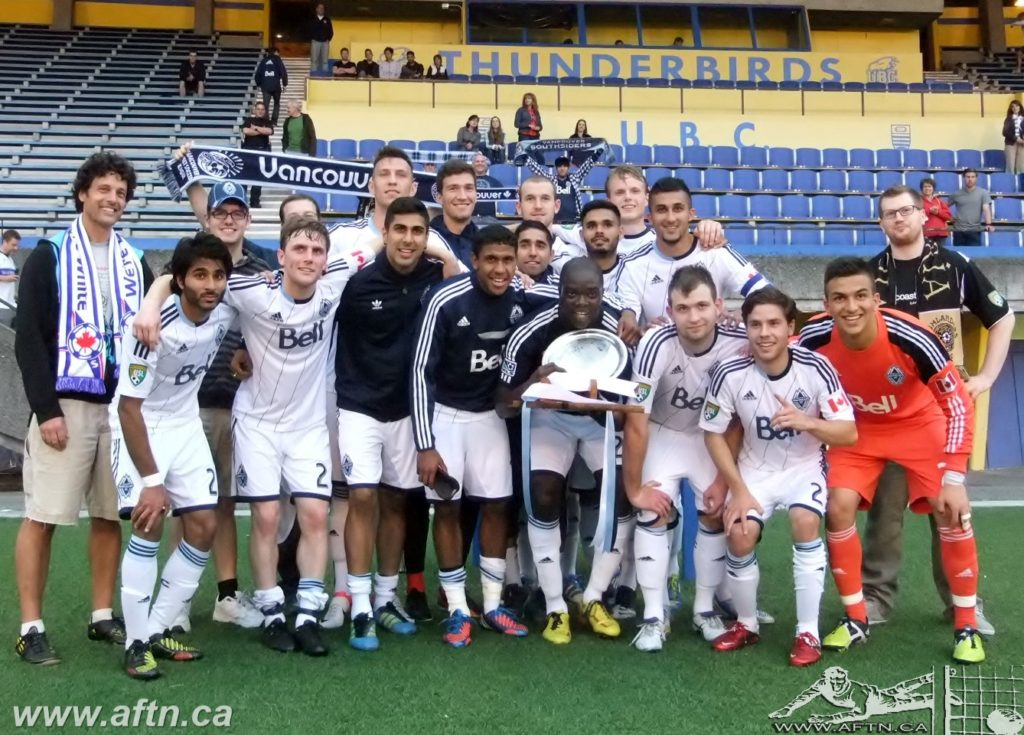 The ‘Caps kicked off the second instalment of the Plate at Thunderbird Stadium on May 17th, but it was the Highlanders who came away with a hard fought 3-2 away victory thanks to two goals from Jordie Hughes and one from Riley O’Neill. Niall Cousens hit a brace for the ‘Caps but it wasn’t enough.

That meant the Highlanders had to chance to win their first ever play on home soil two weeks later. This time it was an even higher scoring affair, and another away win, with the Whitecaps winning a cracker 5-3.

Jordie Hughes and current Whitecaps MLS player Brett Levis shot Victoria out to a quick 2-0 lead before three unanswered goals from Derrick Bassi, Niall Cousens, and Aminu Abdallah had Vancouver ahead at the start of the second half. Hughes brought it level, before Gagan Dosanjh and another from Cousens gave the ‘Caps the crucial win in front of 2,044 fans.

The result set up a winner takes all showdown at Thunderbird Stadium on June 28th, or as it turned out, a draw takes all, as both teams battled to a 1-1 draw that saw the ‘Caps retain the plate on goal difference. Sasa Plavsic shot Vancouver into a 23rd minute lead before Brett Levis levelled five minutes before half time. But the game winning moment of the match came in the closing stages when Marco Carducci pulled off a stunning point blank double save to deny Victoria the victory, winning Vancouver the Plate and AFTN’s ‘Save of the Year’ in the process.

And with that, the Whitecaps were once again Juan De Fuca Plate champions.

For the 2014 instalment, Vancouver and Victoria played out a two game, home and away series to decide the home of the Plate, for what proved to be a three year period.

The Highlanders were eager for their first success and silverware, and they got it over two hotly contested, high scoring encounters, that were a credit to both teams. 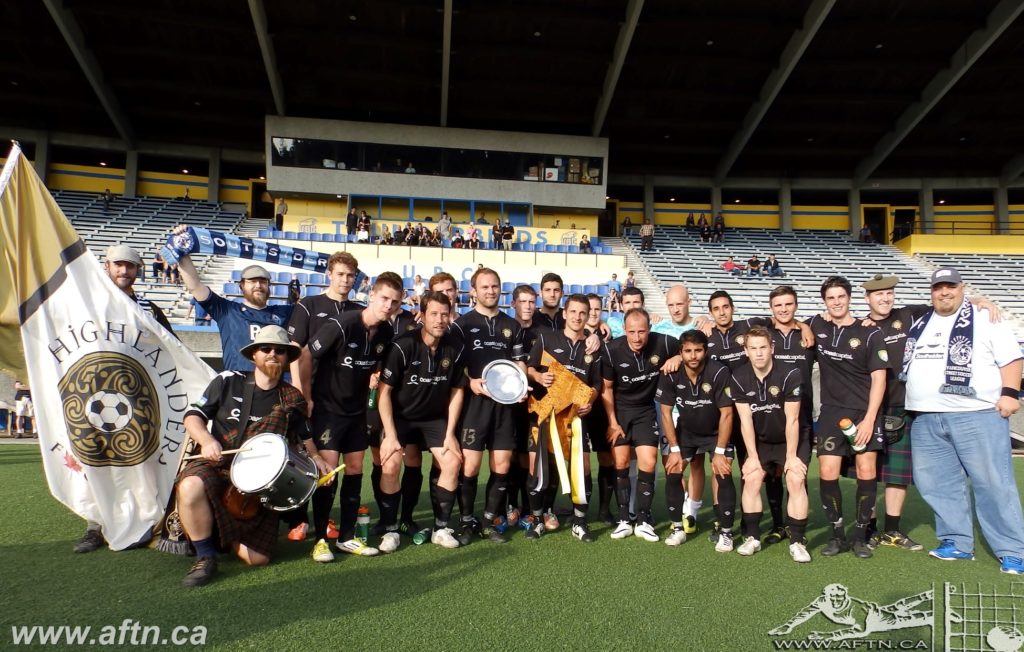 The first match took place at Royal Athletic Park in Victoria on May 4th. Colton Cook fired the ‘Caps into a 29th minute lead, before Carlo Basso tied things up five minutes later, and that was it until the game exploded in the last ten minutes. Current Calgary Foothills player Ali Musse fired the ‘Caps back in front in the 82nd minute, but Wesley Barrett tied things up against two minutes later, just a minute after coming on.

With the game seemingly heading for a draw, ‘Caps keeper Nolan Wirth was adjudged to have conceded a stoppage time penalty and Riley O’Neill buried it to give the Highlanders the advantage after the first match.

The second match took place at Thunderbird Stadium on May 23rd and Victoria stunned Vancouver by coming out all guns blazing and blasting into a 3-0 lead just nine minutes in through goals from Cam Stokes, Ryan Ashlee, and Carlo Basso. That seemed certain to secure their first ever Plate, but the ‘Caps came storming back and Kianz Froese pull one back in the 20th minute.

Victoria restored their three goal cushion on the day with a second from Basso, but the ‘Caps then hit three unanswered goals of their own from Reynold Stewart and a brace from Niall Cousens, to make it all to play for with 18 minutes remaining.

But Blair Sturrock finally put the game, and the Plate, to bed for the Highlanders with a goal a minute from time to make it 5-4 on the day and 8-6 on aggregate. All that was left was for Victoria captain Tyler Hughes to lift his side’s first ever Juan De Fuca Plate.

The Highlanders now head into Swangard Stadium this weekend as reigning Juan De Fuca Plate champions for the new battle against TSS Rovers, with a quick double header of matches coming up on Friday and Sunday. A third match takes place in Victoria on July 9th, but with the first three Plates all being presented in Vancouver, TSS will be looking to get the business done in these two games, winning the Plate and maintaining their unbeaten home record.

Fittingly, the return of the Plate, and this new ‘Battle of BC’, has been named the PDL Match of the Week on Friday. A great showcase for both teams to let a national audience know what they’re all about.

It’s going to be a perfect night for football, in a beautiful setting. The Swanguardians are also planning a pyro spectacular, so get along and enjoy all the fun and action. Tickets cost $10 for adults and $7 for children and will be available at the gate or ahead of time on TSSRovers.com.

If you can’t make it along, you can watch the stream of the match, presented by AFTN, HERE. And check out all the history of the Juan De Fuca plate on the official website HERE.

Here’s some of our photos from the three Plate presentations to date.