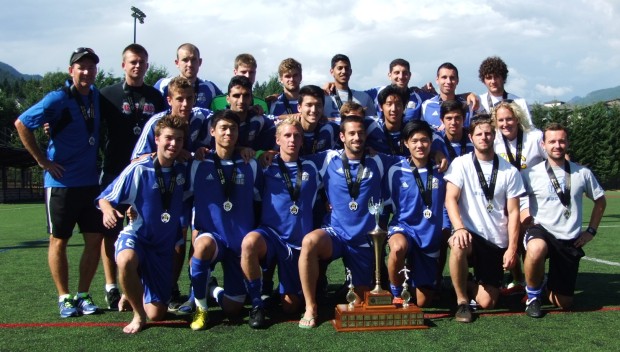 Vancouver Thunderbirds put on a goalscoring show of strength at this year’s Pacific Coast Soccer League (PCSL) Challenge Cup weekend, knocking in 11 goals on their way to lifting back to back Sheila Anderson Memorial trophies.

The other big winners were Vancouver Whitecaps Girls Elite team, who became only the second women’s team in PCSL history to win the triple crown of the League, Kevin McAdams Memorial Cup and the Dave Fryatt Challenge Cup.

The BC based PCSL was reconstituted in 1995 as a summer league, although the original Pacific Coast Association Football League was formed in 1908 and there’s been a long and sometimes rocky history which you can read more about HERE.

The Challenge Cup is a four-team end of season tournament contested by the top teams in the Men’s and Women’s Premier and Reserve League standings over the course of the season.

This year’s tournament was hosted by Coquitlam Metro-Ford at the city’s Town Centre Park and those in attendance enjoyed a great weekend of local football, with some top quality football on display and a barrowload of goals.

The action kicked off at noon on Saturday with both Men’s Premier Challenge Cup semi finals.

The most eagerly contested match up was between the teams that finished second and third in the regular season League table, Bellingham United and Vancouver Thunderbirds.

As the only American side taking part, there was a little bit of added spice, but it was a far different Bellingham side to the impressive team we saw on our visit to Civic Stadium back in June, as the Thunderbirds ran riot and Bellingham lost their cool in a 6-0 thrashing. 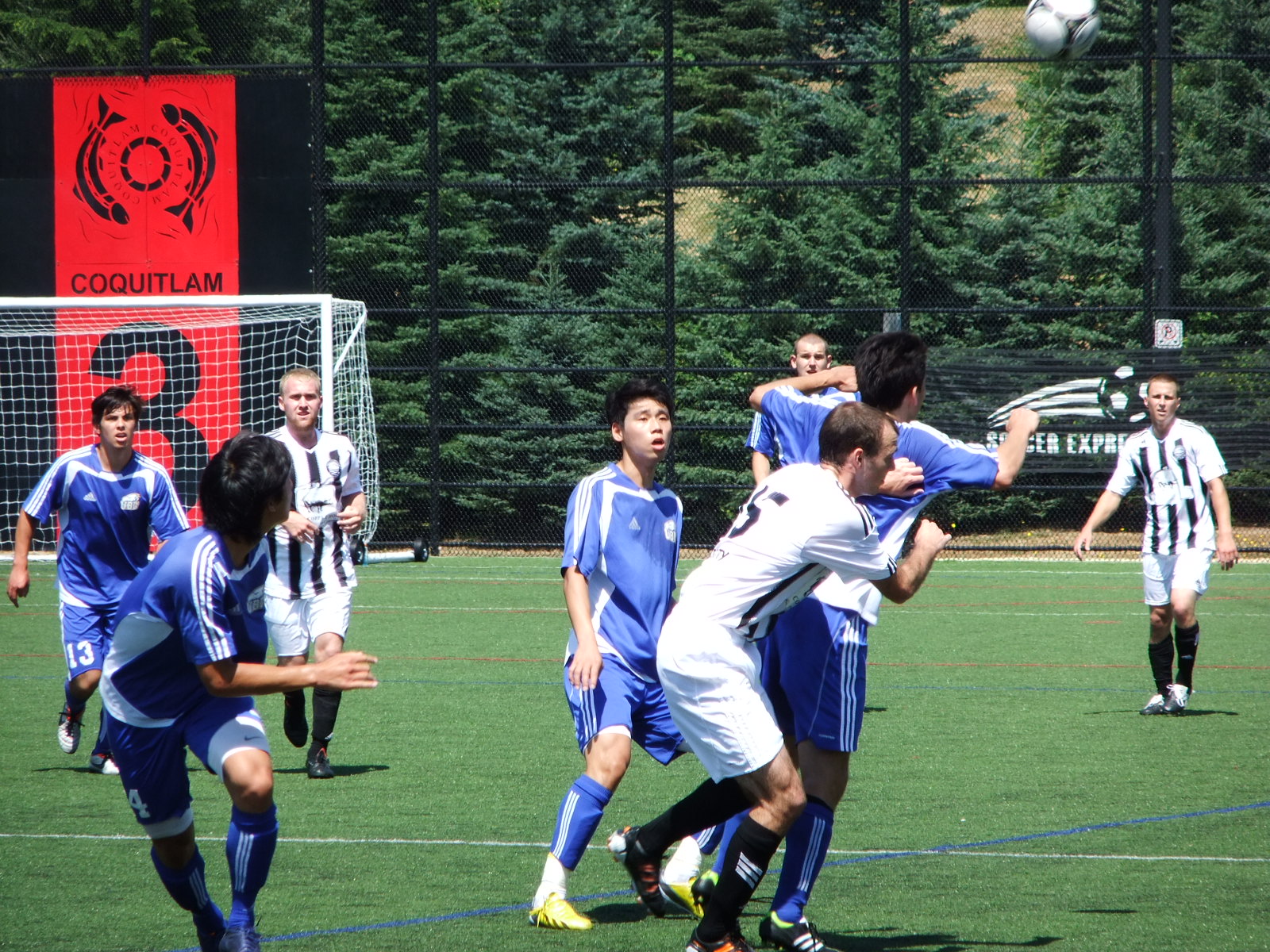 After a slow start that saw them lose their first two games of the campaign, Vancouver Thunderbirds have been going from strength to strength and came into the tournament on the back of a three game winning streak.

It was a fairly even first half, with both teams having chances, but well taken goals from Sean Einarsson and Greg Smith gave the Thunderbirds a 2-0 lead at the break, having also hit the woodwork twice.

Within 20 seconds of the restart the game was effectively over as a contest when Vancouver caught Bellingham cold and Cam Davis drilled the ball into the roof of the net from just inside the box to make it 3-0.

The goal seemed to sap a lot of the will from the Americans and that reduced further in an explosive couple of minutes midway through the half.

Bellingham manager Lance Calloway had been chirping away at the referee about consistency and had been spoken to in the first half. When he screamed it again in the 65th minute, the ref came over and he was sent off, sparking let’s say an animated dialogue!

If Bellingham were aggrieved at that decision, they were incensed further a minute later when there was an adjudged push in the box and the referee gave the Thunderbirds a penalty. Bellingham substitute Nick Saletto was then sent off for dissent.

Andre Herath stepped up and buried the penalty and with Bellingham spirits broken Whitecaps PDL player Niall Cousens made it five in the 69th minute, beating the offside, turning in the box and slotting home into the bottom right hand corner.

Greg Smith grabbed his second and the Thunderbirds’ sixth in the 84th minute, bulleting home a header from 8 yards out.

It was a surprising scoreline but a sign of things to come in Sunday’s final.

You can see video of Calloway and Saletto’s dismissals and the penalty incident below.

Hailing out of New Westminster, Khalsa are the longest running club in the PCSL and had a great season, winning the League title (and the George Cambidge Memorial League Cup that went with it) by three points and scoring an impressive 51 goals in their 14 games in the process. 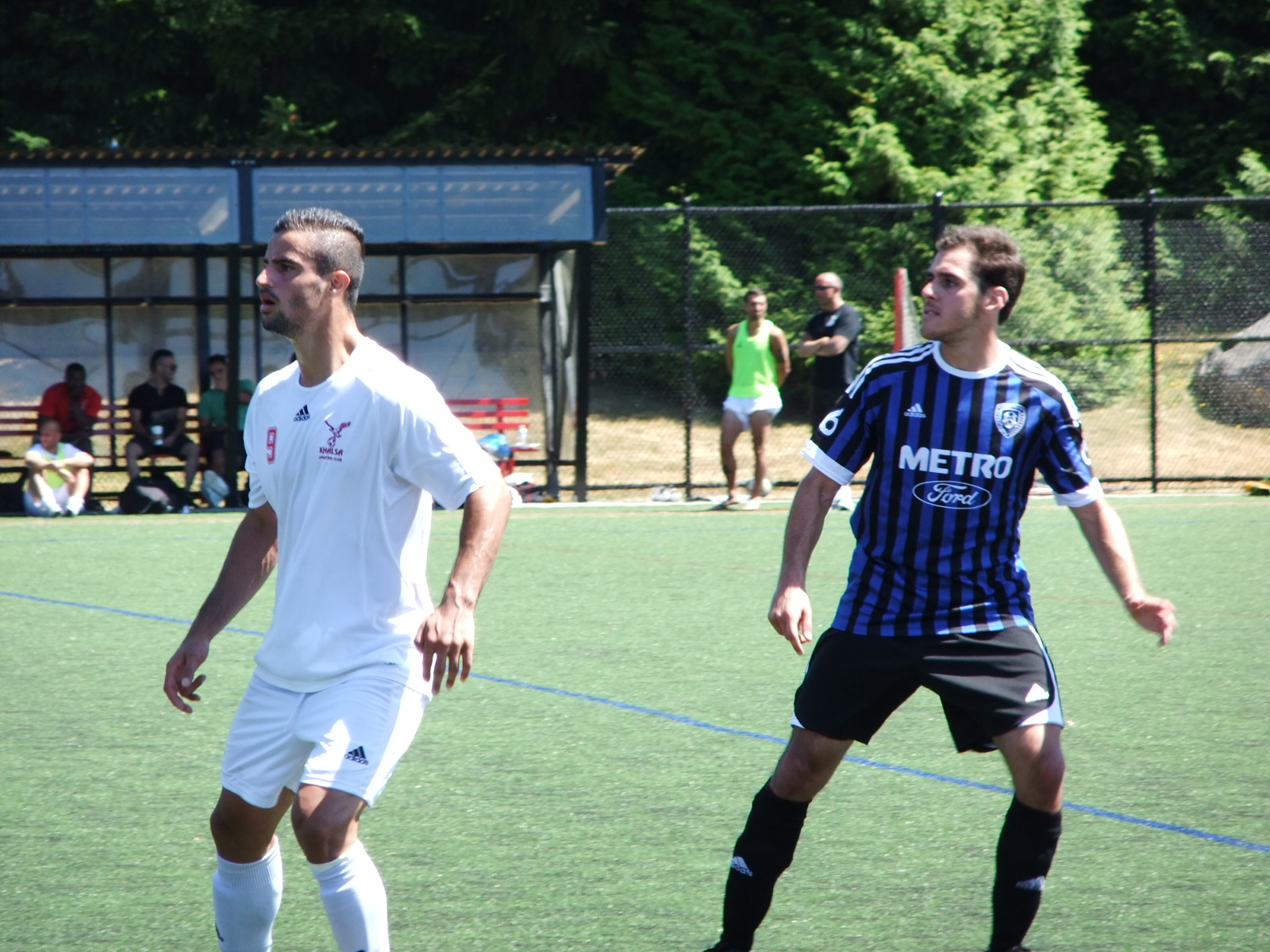 Two first half goals from Ryan Dhillon, who excelled at SFU last season, put Khalsa in an early and commanding 2-0 lead in their semi.

Dhillon’s first goal was a fine individual effort, running at the Coquitlam defence before slotting home.

His Clan team-mate John Hodnett pulled one back for Coquitlam to make a game of it, but Khalsa dealt the killer blow in the 59th minute after a good spell of pressure ended with Milad Rahmati showing some nice footwork before delicately placing the ball into the bottom left hand corner from just inside the box.

Khalsa added a fourth in the final minute from Milad Mehrabi to secure a 4-1 win and set up a tasty looking Sunday final against the Thunderbirds.

It was the Final most were wanting, between the top two sides in the PCSL this season. Everyone was expecting a hard-fought game and a close one that could even go into extra time.

No-one expected the 5-0 scoreline for Vancouver, although it was a result that didn’t reflect the real nature of the game. 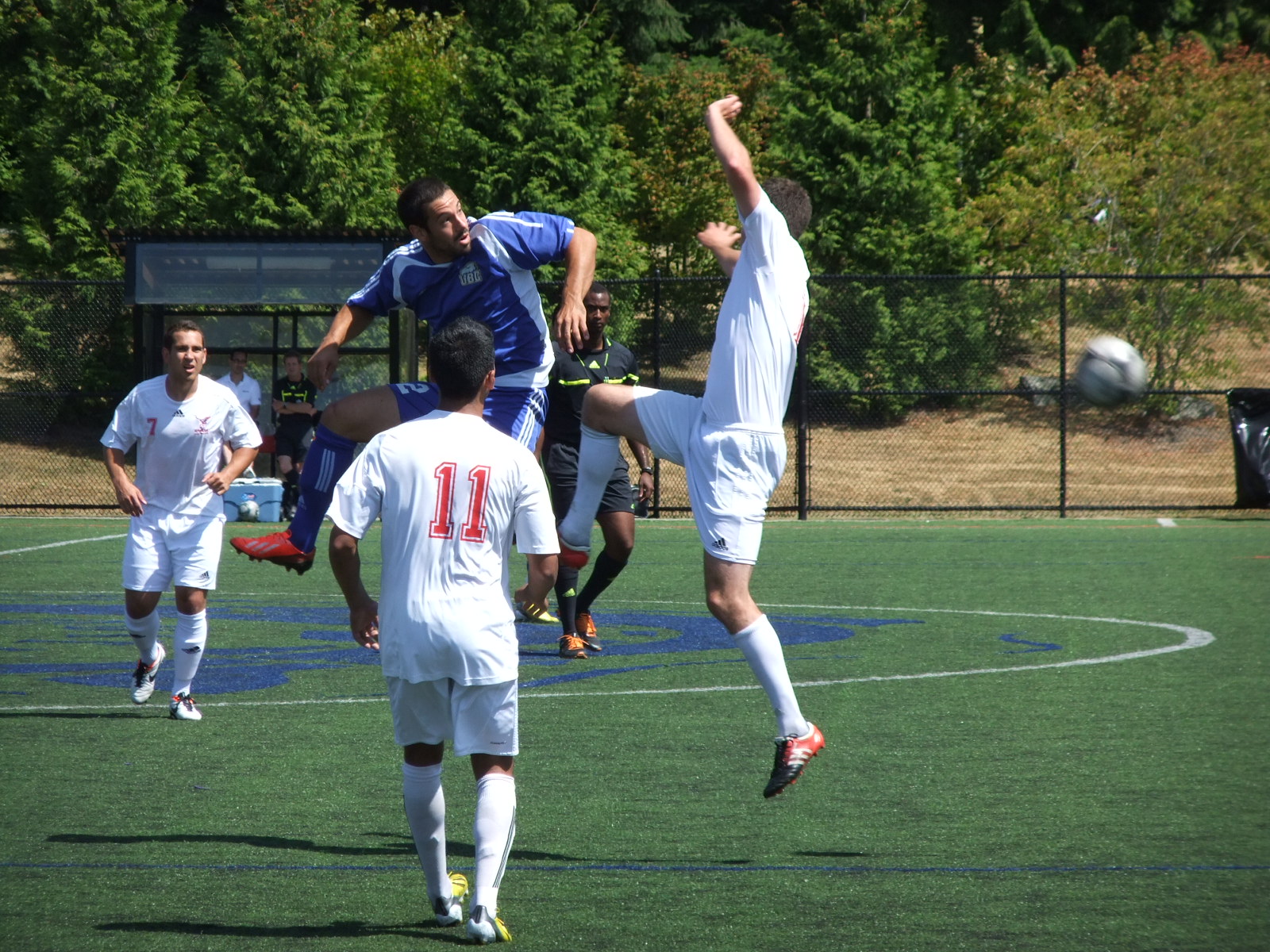 Khalsa went in to the final on the back of a seven game winning streak, their last defeat coming on June 15th in a heavy 5-1 defeat by the Thunderbirds.

Vancouver Thunderbirds nearly got off to a dream start when they had the ball in the net from close range after a free kick but the linesman quickly had his flag up for offside.

The game started off fairly even but it was Khalsa who were having the better chances, the best of which ended with Vancouver goalkeeper Luke O’Shea rushing out and producing a sprawling leg save to deny Milad Rahmati from opening the scoring in the 10th minute.

It was the Thunderbirds who got the chance of the breakthrough in the 25th minute when Greg Smith powered into the box and was sent crashing to the deck by a tackle from behind from Ali Al-Chaer.

It looked a clear penalty and the referee pointed immediately to the spot, amid furious Khalsa protests. Smith had to get treatment and saw his Final ended by the challenge and was replaced by Niall Cousens.

After everything had died down, Navid Mashinchi stepped up and coolly struck the ball down the middle to give the Thunderbirds a 1-0 lead.

The rest of the half was even but O’Shea was called into action again in the closing minutes, producing another fine stop from a low shot.

Both teams came out fired up for the second half and Cousens thought he had doubled Vancouver’s advantage four minutes in when he showed some nice footwork in the box before firing home, but the linesman ruled him offside.

Khalsa responded immediately and Rahmati, who was looking the League champion’s best player, showed some nice footwork of his own to get past the Thunderbirds defence, but as he hit the byeline with his angle narrowed, he could only find the side netting.

The game was still in the balance, with both sides looking like they could grab the next goal. It was the Thunderbirds who grabbed the vital second though and in the most unlikeliest of fashions in the 69th minute.

Defender William Hyde took the ball into the Khalsa half and went to hit a long ball into the box. The Thunderbirds Captain overhit his pass but the Khalsa keeper was off his line and slipped as he tried to get back, allowing Hyde to lob him from 50 yards out.

It was to prove to be the vital moment of the game and one which earned him the official ‘man of the match’ plaudits.

Khalsa now had to chase the game, leaving holes at the back which Vancouver duly punished.

Mashinchi had a chance to wrap things up two minutes later when he got the ball at the back of the box but took too long to get his shot off.

It wasn’t to matter as the Thunderbirds did make it three in the 73rd minute when a long ball forward found Cam Davis and he cut inside before finishing perfectly.

Khalsa kept pushing and had a couple of great chances to pull one back in the next few minutes but couldn’t find a way past the Thunderbirds keeper, who was my ‘man of the match’.

Vancouver weren’t easing up themselves and Cousens showed some determination and tenacity in the box before being brought down with seven minutes remaining. Al-Chaer saw red for his second penalty giveaway of the match and Cousens’ fellow Whitecaps PDL player Marco Visintin hit the penalty straight down the middle to make it 4-0.

There was still time for Vancouver to go nap and it was Cousens who got the goal four minutes from time when he raced on to a long ball and with the keeper staying on his line he had all the time in the world to control it and knock it home.

The 5-0 final was a strange scoreline considering how the match had gone for most of it. It was never a five goal game. Vancouver were deserved winners in the end but Khalsa will be disappointed by not having anything to show for their efforts.

They can content themselves with the League title though and that will see them invited to be the PCSL’s representative in next year’s Provincial Cup. The Club have until August 15th to accept the nomination, otherwise it will go to Vancouver Thunderbirds.

The UBC Thunderbirds made it back to back Challenge Cups with the win and their goalscoring prowess on display this weekend will send another strong message out for their upcoming CIS season, when they will look to bring home another National Championship. 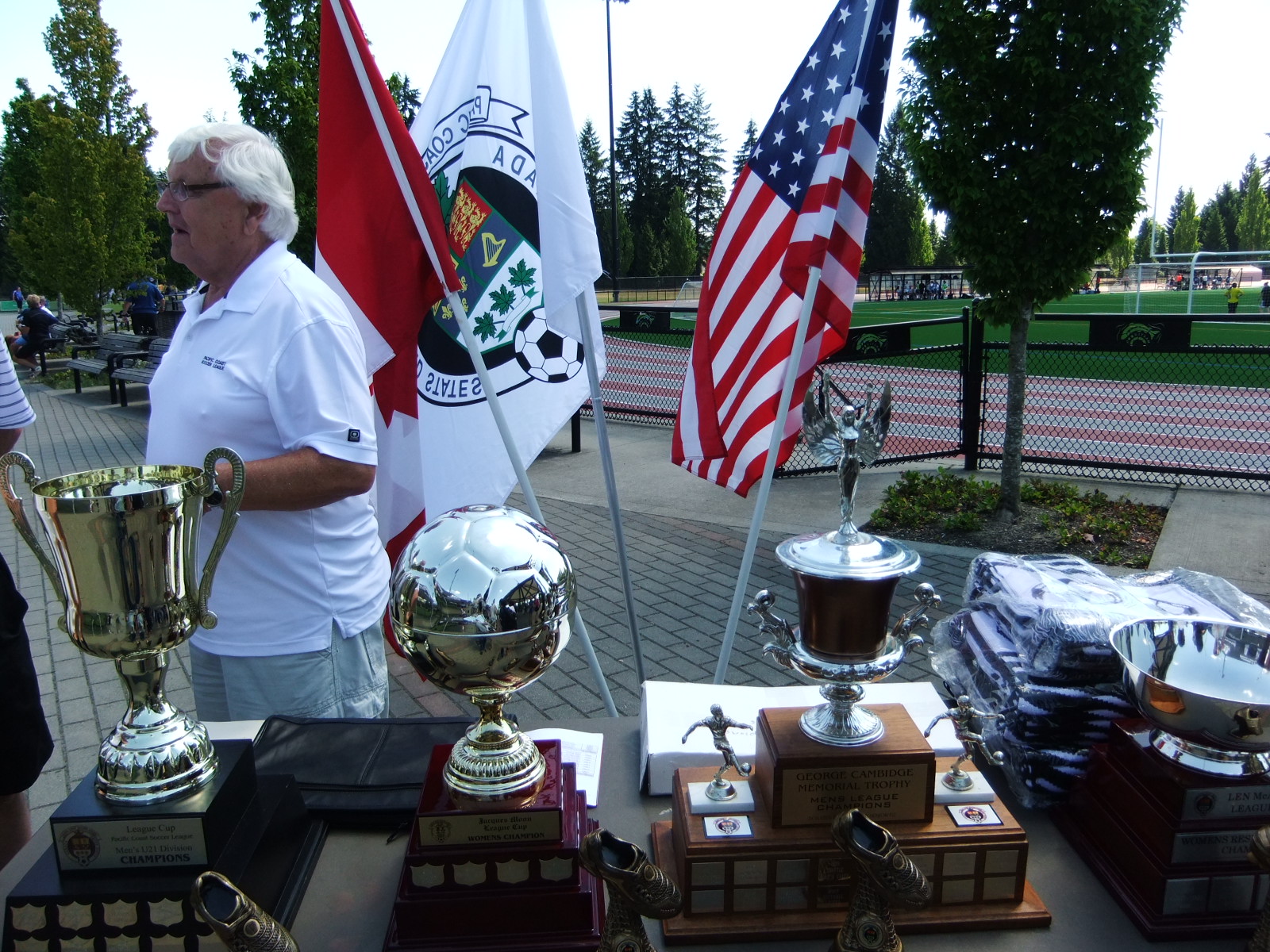 In the Women’s Premier Division Challenge Cup final, Vancouver Whitecaps Girls Elite beat Kamloops Heat 7-2 to round off a fantastic season that has seen them claim the PCSL triple crown and win the Gothia Cup over in Sweden.

Chelsea Harkins claimed the ‘woman of the match’ honours for her four goal performance.

It was also a great Sunday afternoon for Penticton Pinnacles U21s who won both the Men and the Women’s Reserve Division Challenge Cups.