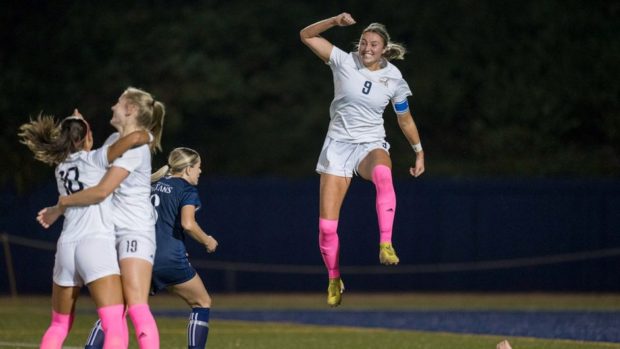 It’s been a senior season for the ages for UBC Thunderbirds striker Danielle Steer. The fifth year forward is finishing off a fantastic college career by sending records tumbling and earning plaudits, and as her time with the program comes to an end, Steer wants nothing more than to cap it off with a second U SPORTS national championship.

Steer’s been dominant for UBC in Canada West action this season, racking up 14 goals and eight assists to take her career points total to 71, breaking the previous Canada West record of 65 career points set by former teammate Jasmine Dhanda back in 2017. Her 22 points tally for the season also tied the single season points record set by TWU Spartans Kristen Gommeringer in 2012.

“It’s been something that’s been on my mind but it’s not something that I’ve let consume me throughout this season,” Steer told AFTN after setting the record. “If I didn’t get a point, I didn’t think oh I’m not going to get the record. I didn’t let it stress me out and I think it came naturally that way.

Coming into this season off the back of a career best 18 goals and two assist 2021 season, many would have expected Steer to play that out and out striker position again that her number nine jersey foretells. But then Katalin Tolnai had a breakout League1 BC season with Varsity FC, co-leading the Golden Boot charts with seven goals.

With that firepower at his disposal, UBC head coach Jesse Symons wanted to find a way to have both of his striking phenoms on the pitch at the same time, so Steer primarily moved out to the left wing, sometimes playing in a 10 role, while Tolnai mostly led the line.

When Steer first came into the UBC program in 2017 she played a lot on the right wing in her rookie season, so the switch out wide wasn’t totally unusual to her, but it’s worked like a charm, with the pair combining for 27 goals and 16 assists between them up to this point of the season.

“I think it gives me a bit more flexibility,” Steer feels. “Also, having both me and Kat on the field at the same time is huge. She’s such a natural number nine and we play well together. If I’m able to play on the wing or in the middle, either way, it works. I kinda grew to like the left wing. It took me a little bit, but it’s worked really well, especially with Kat in the nine.”

And it’s not just Tolnai that summer football helped, as Steer credits the inaugural League1 BC campaign with Varsity as the catalyst for the form she has brought into this college season.

“I think it was super important,” Steer told us. “This summer with Varsity in League1, it really gave me the opportunity to play good quality soccer all summer and not hit my peak come mid season. I was able to play all the way through and maintain that.”

Steer’s contributions helped UBC to a team best 13-1 record in Canada West this season, earning her the conference’s Player of the Year award in the process.

The Thunderbirds are flying heading into this weekend’s Final Four on home turf, ranked number one nationally and favourites to lift a record eighth U SPORTS title.

Having won one national championship already with this group back in 2019, going out with a second, would be the ideal way for Steer to say goodbye to the college game as she prepares for what is to come next.

“It would mean the world to go out with another national title,” Steer admits. “This team is so special to me and so deserving. The amount of work we put in, a national championship would just be the cherry on top.”

So what will come next for Steer? Her performances have already caught the attention of Canadian national team head coach Bev Priestman and there is no doubt that the striker can play professionally.

Of course, with no professional women’s league in Canada that means looking over the border in the US or heading overseas. Steer holds an Australian passport along with her Canadian one, which opens up a number of tantalising possibilities. For now, she’ll just go with the flow and see where the game takes her and with her degree being in sustainability, the world literally is her oyster right now.

“My goal at the end of the season is to see where soccer can take me,” Steer admits. “Maybe overseas somewhere or whatever opportunities there are for sure.”

Wherever she lands, we wish he nothing but the very best and can’t wait to see her continued growth, hopefully heading there as a two-time national champion.

Before thinking ahead to nationals, UBC kick off their quest for another Canada West title on Friday evening at Thunderbird Stadium, where top three finish will see them move on to Laval. First up is an intriguing game against Calgary Dinos, the only team to beat UBC this season. Kick off is 5pm and you can get tickets HERE. If you can’t make it along, AFTN will have the call for all the games this weekend on Canada West TV.