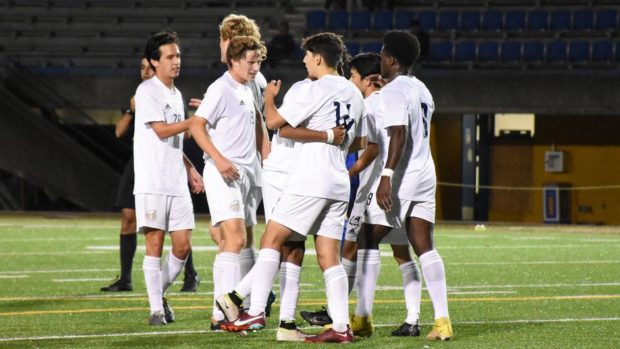 There is simply no room for error for UBC Thunderbirds men’s side at this weekend’s Canada West Final Four.

With Thompson Rivers Wolfpack hosting next week’s U SPORTS national championships in Kamloops, that leaves Canada West with just one berth available to them and four teams battling it out to earn it at Thunderbird Stadium this Saturday and Sunday.

Alberta Golden Bears, Calgary Dinos, and Mount Royal Cougars head west to Vancouver from the Prairie Division to challenge the hosting Thunderbirds, with only the gold medal winner keeping their season alive.

“We’ve known all year that we have to go on and win it,” UBC head coach Mike Mosher said of the upcoming battle. “That’s the case, that’s very clear, but we’re used to it. We’ve got a lot of guys that have been around playoff battles… We have guys that have been in a lot of playoff games and we do have good, intelligent individuals in our squad and they’re not going to let the moment get to them.”

UBC head into their semi-final on Saturday in a rich vein of form. Unbeaten in eight, with five wins in their last six matches, the Thunderbirds finished the regular season with a record of 9 wins, three draws, and three defeats. That set up a quarter-final showdown with Saskatchewan Huskies last Saturday, who they duly dispatched 4-2 thanks to a first half hat-trick from senior striker Victory Shumbusho hat-trick.

Shumbusho has been in phenomenal form for UBC this season. Leading the team with 14 goals and three assists, he is back in top form after a college career that has been blighted with injuries. But it’s not just a one man show. Thirteen different Thunderbirds have found the back of the net this year, putting up 43 goals between them while conceding just 14.

A solid defensive footing has always been the basis of Mike Mosher’s sides and this year has been no different. Led by Canada West Rookie of the Year, and Whitecaps academy graduate centre back, Eric Lajeunesse, the ‘Birds have kept seven clean sheets this season, posting a 0.83 goals against record, all while suffering something of a goalkeeper injury crisis, with three different men used between the sticks.

They head into the Final Four full of confidence, knowing exactly what is on the line, and very motivated to add to their record setting 13 U SPORTS national titles. It certainly won’t be easy even getting there this weekend, but they also have the added motivation of this being something of the end of an era for this particular squad.

Shumbusho is one of eight graduating seniors, with UBC also set to lose some hugely key pieces in defender Daniel Kaiser and midfield maestros Tommy Gardner and Nick Fussell. All should find themselves playing in the pro ranks next year, but before they even think about that, they want to bow out of the college game with a national title, and Mosher wants that for them as well.

“We want to go get it done with this particular group, this is a wonderful group,” Mosher said. “I’m looking forward to it. The goal at the start was to be first in the division and give ourselves home field advantage and we’ve done that. We’re good at home and that will give us an extra boost I think.”

UBC v Alberta kicks off at 2pm on Saturday afternoon, with Calgary and Mount Royal going at 11am.