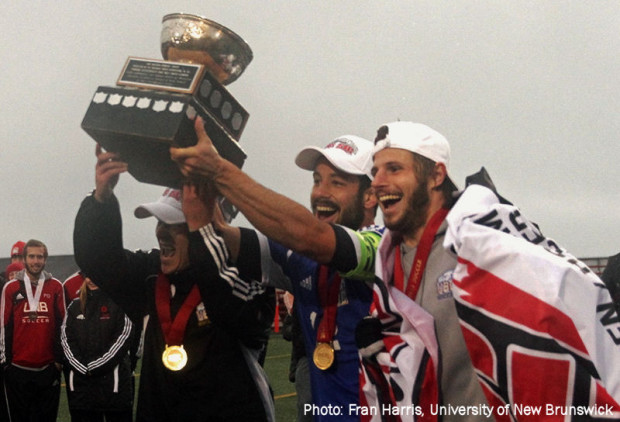 History was made in a bitterly cold snowy Fredericton on Sunday afternoon as the UBC Thunderbirds claimed back to back CIS Championships with a dominating 3-1 win over Laval Rouge et Or.

It was a record increasing 13th title for the Thunderbirds, who had to fight back from going a goal down against the run of play in the first half before a devastating 13 minute second half blitz saw goals from Niall Cousens, Milad Mehrabi and Navid Mashinchi set the defending champs on their way to victory.

It is the first back to back CIS Championships since Laurier Golden Hawks won the titles in 2000 and 2001.

Cousens also picked up the Championship MVP, the second Whitecaps PDL player in a row to win the award following on from Gagan Dosanjh, who won last year’s honour, and Victoria Vikes’ Cam Hundal who won it in 2011.

The game kicked off in minus one and snowy conditions and the early going was bogged down in the middle of the park, with neither team able to create any chances and both defences were untroubled.

UBC were hit by an early blow when Canada West MVP Reynold Stewart hobbled off injured just eight minutes in, having already missed the first two games of the tournament.

The Thunderbirds were bossing the play and making most of the running, without delivering dangerous balls in to the box or creating any clear cut chances.

UBC thought they had finally broken the deadlock on the half hour mark when Sean Einarsson poked home a loose ball in the box after the Laval keeper had fumbled a Niall Cousens header, but the referee seemed to blow for a foul on the keeper Desrosiers.

The game was mostly being played in the Laval half and it was feeling like a UBC goal was coming soon, but from nowhere, Laval opened the scoring in the 33rd minute with their first shot of the game.

And what a shot it was.

Laval won a free kick ten yards into the UBC half and the deep ball was only cleared as far as Amaury Fauverque outside the box and he volleyed a screamer to give the Quebec champions the lead.

As against the run of play as it was, it was one of the goals of the tournament and UBC were now going to have to come from behind if they wanted to land back to back championships.

They continued to take the play to Laval but were struggling to find a way past a very solid Rouge et Or backline.

As UBC pushed forward in the increasingly heavy snow, they were leaving a bit more space at the back and Fabrice Lassonde had an effort go over for Laval with three minutes of the half remaining.

With the first half in stoppage time, UBC hit a long free kick in the box and an unmarked Paul Clerc found himself onside but unable to bring his header down on target.

It was one way traffic to start the second half with UBC dominating possession and launching attack after attack.

The Laval defence was bending and it only took six minutes of the half for them to break.

Navid Mashinchi broke on the right, cut the ball back to an unmarked Niall Cousens in the middle, and the Whitecaps PDL player made no mistake in firing the ball home high into the net from 14 yards out.

The game turned quickly chippy, with fouls and cards galore.

Laval were struggling with UBC’s set pieces and the Thunderbirds came close to taking the lead just past the hour mark when Cousens’ head flick from a throw in came to the head of Bryan Fong but the defender’s header went straight into the arms of Desrosiers.

UBC’s constant pressure saw them take the lead in the 63rd minute when Cousens flicked on a long ball into the path of Milad Mehrabi and the Thunderbirds made no mistake in burying it past Desrosiers.

Laval were shellshocked and they were caught out again 90 seconds later.

Mashinchi collected the ball on the edge of the box from a failed clearance, took a couple of touches and slotted home into the bottom left corner to give UBC what was to be a match winning 3-1 lead.

UBC had the ball in the net again in the 77th minute but had it ruled out once more. Desrosiers couldn’t hold on to a fierce Cousens shot and the big striker followed in to bury the rebound but somehow the flag went up for offside.

Laval started to lose their discipline and gave away a number of free kicks, frustrated that UBC were giving them no way back in to the game, registering no shots in the second half, to the Thunderbirds’ eight.

That frustration increased further when Lassonde thought he had given Laval some hope in the 88th minute when he put the ball in the net, but the linesman’s flag was up for offside.

Mehrabi had a breakaway in the last minute but pulled his shot wide right, as UBC killed off the game with ease.

The final whistle signalled jubilant scenes on the UBC bench as the Thunderbirds made it back to back CIS Championships and their fourth Sam Davidson Memorial Trophy in the past nine years. 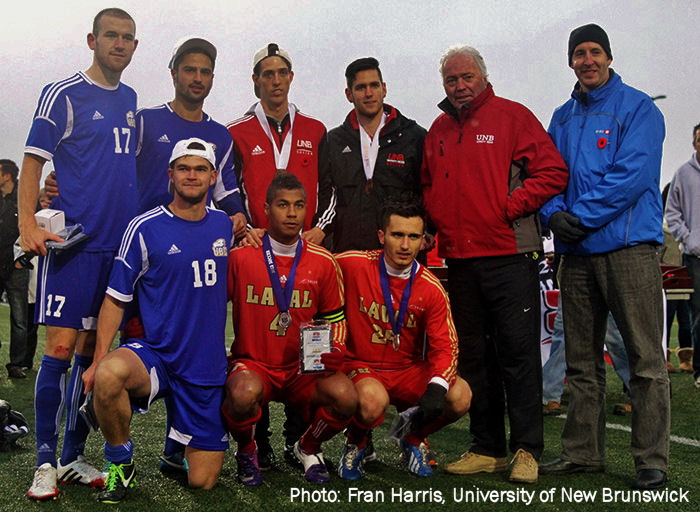 It was a fantastic team performance, as it has been all season for the Thunderbirds, but there were also some final individual honours to be handed out.

Niall Cousens was named the CIS tournament MVP and Cousens, along with teammates Paul Clerc and Milad Mehrabi were named in the CIS Championship All-Star team.

UBC’s back to back CIS titles are their first since their fourpeat from 1989 to 1992, a team which included Thunderbirds’ head coach Mike Mosher as a player.

The current Thunderbirds have now gone down in the history books as back to back Champions, but that desire of matching their predecessors’ achievements is the motivation that will drive them on to more success.

With the talent coming through the UBC ranks right now, there are only three fifth year students on the squad, you wouldn’t bet against them making it a threepeat in 2014 in PEI.

Well done UBC Thunderbirds. You’ve done British Columbia football proud once again, even more so when you consider that the line up the Thunderbirds fielded today were all BC lads, from Nelson to Vancouver.

Here’s to an even more promising future.

You can watch highlights of the game below: