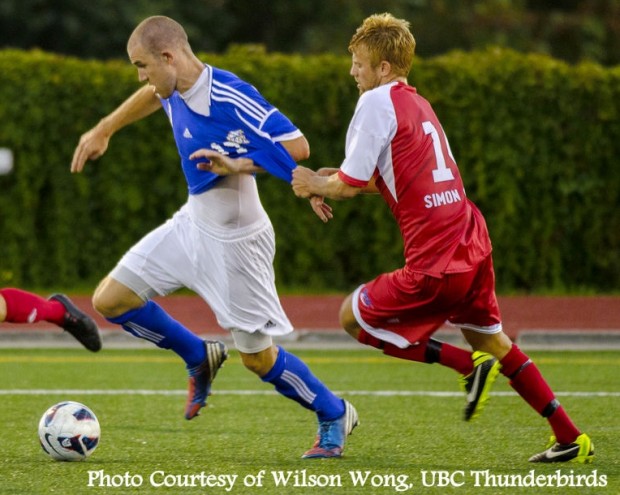 When a player scores four goals in the first half hour of a Championship game, people take notice.

Niall Cousens’ stunning display for UBC against Saskatchewan in yesterday’s 6-1 win in the Canada West Championship game came as both a joy and relief to the striker, who played with the Whitecaps during the 2013 PDL season.

After starting the season with three goals in the first four games, Cousens was on a little bit of a barren spell with just one goal in the previous 11 games, but he showed Sunday what he is capable of and just how dangerous he can be when given service and space, especially in the air.

Whilst happy with his overall play this year, the lack of goals has obviously been something the coaching staff have been aware of and they challenged Cousens to go out and refind his scoring touch this past weekend. It certainly worked.

“Niall has such a presence, being such a big man.” UBC Head Coach Mike Mosher told us after Sunday’s game. “He gets a lot of attention. he’s closely marked a lot, which creates a bit more space sometimes for some of the others. The Reynolds, the Milads, the Navids.”

“I’ve been pretty happy with Niall’s performance overall” continued Mosher. “The one thing that’s been lacking has been some goals and the coaches challenged him today to come on and give us a bit more and something in the goal department, and wow, I guess we should have really pushed that button a bit earlier!”

Cousens may have taken the plaudits yesterday, but he was also quick to point out that it was an all round team performance and not an individual effort.

“It was fantastic. It was good to step up in a game that matters. The guys were fantastic. The whole team. They were giving me service and it was a good, good team performance. We came out flying.”

And that teamwork is how it’s been all season for UBC and the trouble other teams have in containing the Thunderbirds. It’s not just about one goalscorer or one playmaker. Ten players have found the scoresheet and 12 have contributed assists, and Cousens has played an important part in the success.

It’s easy to just look at just the ‘goals scored’ stats for a striker, but you shouldn’t always read too much into those. In Cousens’ case they mask another big part his game – that of provider and setter upper.

Although he may not have been getting on the scoresheet himself, Cousens added five assists for the Thunderbirds during that 11 game spell of the regular season, and has either scored or assisted in 10 of the UBC’s 16 games so far this year.

It’s a trait that Vancouver Whitecaps fans saw from Cousens for the PDL side this season, on the way to the 6 foot 4 striker scoring 8 goals and contributing 4 assists in his 13 games, leading the team in both categories and being named to the All-Western Conference team.

Cousens enjoyed his time with the Caps U23 side.

“It was a great experience. I love working with the Club. Good coaches, good players there and I look to have more opportunities with them in the future.”

The Whitecaps have kept in contact with Cousens and continue to follow his progress at UBC, so it will be interesting to see his continued development with the Thunderbirds and how he performs for the Caps when he surely returns for PDL or USL Pro action in the future.

This summer was something of a homecoming for the Vancouver born Cousens, who had been playing in the Czech Republic for the past three years, first with top flight team Slavia Prague and then on loan with Second Division side FC Hlucin.

Having played professionally and had a taste of the Whitecaps environment, does he see himself staying the full four or five years at UBC or is he keeping his options open?

Niall will get his first chance of that this week when the Thunderbirds defend their CIS Championship in New Brunswick from Thursday.

Having played in a professional environment, and as a student of Kinesiology, what are his keys to the Thunderbirds preparations and hopeful success in Fredericton?

“Be smart with our bodies, travel well, come out flying at nationals and try and win another title.”

And after his goalscoring exploits in the Canada West Championship game, has Cousens set himself any target for the week ahead?

“Just a title. That’s all that matters.