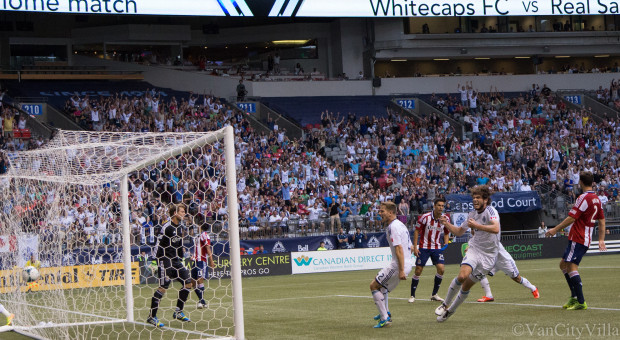 There’s a familiar face to Whitecaps fans on the UBC sidelines this season.

Caps striker Tommy Heinemann has been involved as assistant coach with the Thunderbirds since the start of the CIS season in August, after approaching UBC head coach Mike Mosher to see if he could help out with the program.

It’s been a successful partnership for both sides, and for Heinemann it’s just another part of his continued learning of the game and has only cemented what he would like to see as a future career path.

“I’d like to play as long as I can, but when I’m finished playing I’d love to coach. I’ve started to see that angle lately and it’s the next best thing. I love it and hopefully I can do it afterwards.”

Despite his young years, Heinemann has coached before, helping out with the Crew academy in Columbus whilst injured last year. The Thunderbirds are his highest coaching involvement so far and the opportunity to coach at a top school like UBC is a “special opportunity” and a great grounding for his future plans.

So how has he found his first season with the team?

“It’s been great. It’s been a blessing to coach under a great coach like Mike, and Dave, to learn from them. As well as a great group of kids. It’s great players that we’re coaching.”

We spoke with Tommy after he played his part in guiding the team to Sunday’s Canada West Championship win. How did it feel to lift his first trophy with the team?

“You don’t get to battle for a trophy every day, so every time you get to win hardware it’s an honour.”

Heinemann takes part in coaching sessions with the team a couple of times a week and works with the strikers and attacking players. His input and experience has played its part in a high scoring season for the Thunderbirds.

At 26, Heinemann will hopefully have a lot of playing years still ahead of him, but having an injury last year that kept him out for the whole season bar one game obviously plays on your mind as to never knowing what is around the corner for you.

And coaching is something that Heinemann has wanted to do since an early age when he set up a soccer camp aged just 11 years old. That camp has been running for the past 15 years and is going strong.

Along with his work at UBC, Heinemann is also running a ‘finishing clinic’ with Vancouver United for 13 to 18 year olds.

Heinemann is currently in New Brunswick with the Thunderbirds, and the team now sit just one game away from back to back CIS Championships.

No other team has done that since Laurier Golden Hawks in 2000 and 2001. Can UBC buck that trend and write themselves into the history books?

“Of course. Anything’s possible. This is a great group. We’ve got a lot of special guys in here and I think we can do anything.”

That winning mentality is clear to see with everyone connected with UBC.

Heinemann’s future with the Whitecaps is still unclear, but if he does return to play MLS in Vancouver next year, his coaching experience is likely to give him a better insight as a player in his own right.