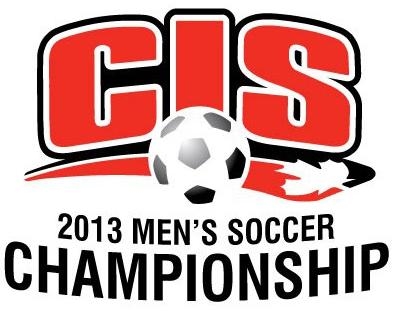 UBC Thunderbirds opened up the defence of their CIS Championship with a tough 1-0 win over the RSEQ runner up Montreal Carabins in Fredericton this morning.

The Thunderbirds were made to work hard for their victory against a well organised and stingy Carabins defence, with Sean Einarsson hitting the only goal of the game in the 69th minute from long range.

UBC now face an even stronger test in Friday’s semi final against the Ontario champs, the University of York Lions.

It was a robust game from the off, with UBC centreback Paul Clerc particularly being in the wars but standing tough to win the ‘man of the match’ accolades.

Montreal defended well throughout but also had the better of the first half action, coming close through Samuel Leblanc in the 15th minute. UBC responded with a Harry Lakhan shot five minutes later, but one of the pivotal points of the game came in the 26th when Montreal’s Maxime Laurey finished off a neat move by stroking the ball home, but to BC relief the linesman had his flag up for what looked like a very narrow offside decision.

UBC came out looking much stronger in the second half and Montreal were very fortunate not to have Mircea Ilca sent off in the 50th minute for a horrible late tackle from behind on Clerc. The Carabins player was already on a yellow but received just a talking to and was soon substituted.

The winning goal came in the 69th minute when Whitecaps PDL player Niall Cousens controlled a bouncing ball and played a neat flick to Sean Einarsson, who hit it low into the net from 20 yards out.

Cousens had a chance to increase the lead shortly after and although Montreal pushed hard for a late leveller, UBC held on with ease and move into tomorrow’s semi final showdown.

The game continues a good first CIS season for Einarsson whose overall play, along with 3 goals and 2 assists from his 11 games, saw him pick up the Canada West ‘Rookie of the Year’ award. He also won a Challenge Trophy runners-up medal with Surrey United Firefighters at last month’s nationals.

UBC’s semi final showdown will come against York Lions who ran out comfortable 3-0 winners against Saint Mary’s Huskies, thanks to a goal in each half from Mark Kaye and an opener from Dylan Sacramento. Both players will be amongst several that UBC will need to work hard to contain on Friday.

There was better news for Quebec’s other representatives in the tournament with Conference Champs Laval coming through 3-2 in an entertaining game with Ontario side Ryerson.

Le Rouge et Or were two goals up and seemingly cruising at the half but the Rams pulled one back with a stunning goal straight from the restart. Alex Braletic taking the touch, catching the keeper off his line and blasting home from the halfway line just three seconds in.

Laval retook the lead, then gave away a penalty but held on in the end and will now face the University of New Brunswick in the other semi final.

The hosting Varsity Reds needed an extra time penalty to beat the Canada West runners up, Saskatchewan Huskies, in the last quarter final.

The Huskies had taken the lead through a 7th minute goal from Victoria Highlanders PDL player, and Whitecaps trialist, Brett Levis. The hosts tied it up 20 minutes later, before going on to win the tie with the extra time spot kick from Yousuf Mohammed, with just 15 seconds of the first period of extra time remaining.

UBC v York will be the first semi final to be played on Friday and will kick off at 12 noon (Pacific Time). You can watch the game live, or later on demand, at http://www.cis-sic.tv. The Laval v New Brunswick semi kicks off at 2.30pm.