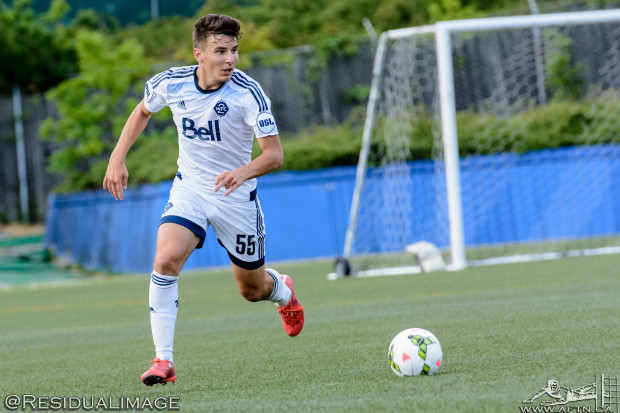 It’s been quite the year for Chris Serban.

After winning Canada West and CIS Rookie of the Year honours last November in his first season at UBC, the 19-year-old Vancouver Whitecaps Residency alumni was called into his first Canadian training camp the same month.

After impressing as a sub against England and as a starter against Russia, Serban was named to Rob Gale’s squad for the CONCACAF U20 Championship in January, the qualifying tournament for this year’s FIFA U20 World Cup in New Zealand.

The tournament may not have gone well for Canada, who finished fifth in their six team group, but on a personal level for Serban, it was a huge success, with the defender playing the full 90 minutes in all five of Canada’s matches.

Fresh from representing his country, Serban returned to Vancouver and the Whitecaps, signing a USL contract with the ‘Caps in February for WFC2’s inaugural season.

Helped by his ability to play both right and left back, Serban soon made an impact for WFC2 and became a pivotal member of the backline, making 16 appearances, all but three of them starts, before a flying elbow caused a season ending injury down in Portland in July.

He’d played 1181 minutes in the USL, adding one goal and an assist. His injury and recuperation may have ruled him out of the rest of WFC2’s season, but it meant he was fresh to return to UBC for the CIS one.

For as we revealed back in March, Serban is trying to make it in the pro game, while also continuing his education at UBC, where he is studying business.

It makes for a lot of work both in the classroom and on the football pitch, but Serban’s handling it well and his game has seen the full benefit.

“It was definitely tough at USL,” Serban admitted to AFTN after last Saturday’s Canada West Championship triumph. “It was training every day with quality players. It definitely helped develop my speed of play and it got me more confident playing in the CIS.

“My first year I think I did okay, but I was lacking confidence compared to this year, where I feel comfortable and I know what it’s about. I have the experience as well, so it was definitely a lot of help improving speed of play.”

Strange to hear a player who won both Conference and National Rookie of the Year honours describe his season as just “okay”, but that just shows what standards Serban sets himself and what he hopes to achieve in the game.

He was a standout in his short spell with the Whitecaps U18s in 2014 and looked even better for the Thunderbirds last season, where he played for all but 16 minutes in UBC’s 11 regular season games, contributing two assists in the process.

But since he’s been training and playing in the USL with WFC2, the further improvement in Serban’s game has been evident during his second year with the Thunderbirds, especially to UBC head coach Mike Mosher.

“Those are probably, for me, the biggest advancements in his game. He’s always been very solid defensively and I think he’s improved there [too].”

Serban recovered fairly quickly and returned to UBC in time for the start of the CIS season. So was that always going to be the plan? Or was the expectation that he would see out the full USL season with the ‘Caps before returning back to playing college soccer?

“It was always somewhat the plan,” Serban told us. “We couldn’t have predicted the injury, but once it happened I was basically ruled out for the rest of the ‘Caps season anyways. Then it was good because that’s when the UBC season was starting, right when theirs was ending. So it was a good transition to come right back into it and not miss any games and be able to get good game time.”

And that he did.

Serban has made 13 appearances for the Thunderbirds this season, playing 1079 minutes. The development of his attacking abilities that Mosher referred to has been very evident, with the full back getting forward a lot more often.

That’s resulted in two goals and two assists on the year, but Serban saved the most important for the last game of the Canada West season, scoring the Championship winning goal in extra time in Saturday’s 2-1 triumph over UVic Vikes.

After running almost the full length of the pitch, Serban buried the ball past the Vikes keeper, capping off a whirlwind year for the young defender in some style with his first Championship. But he’s not finished there.

“It feels amazing,” Serban told us. “It’s a dream come true to win it, but it’s not over yet. We want to push hard at nationals and obviously win a national title. That’s the main goal this year. This is just the first and the beginning of three games to come where we have to work hard and obviously win a championship.” 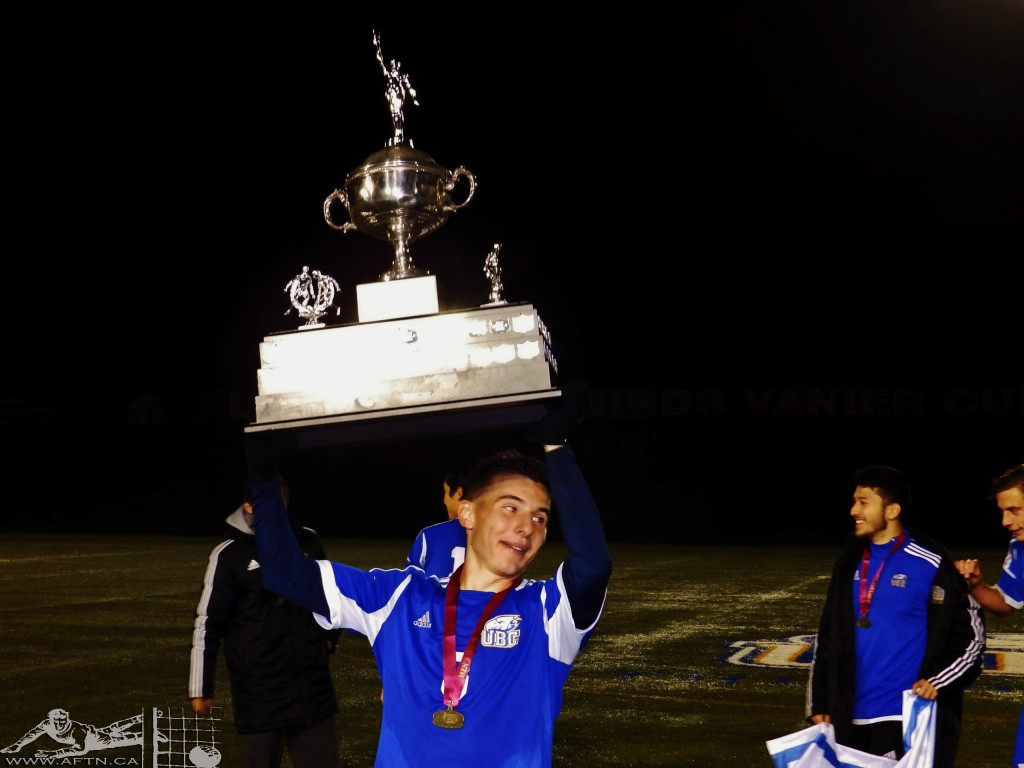 Every player dreams of scoring the goal that wins his team the Championship. Serban is no different and he’s proved that dreams can come true!

“Before every game I dream that I’m going to score,” he joked with us. “But usually as a defender it never happens. So it was quite something to be able to get it and it was a good fight too for my teammates to slip that ball in. I just saw the goalie and aimed for the corner and hoped for the best.”

So a 16th Canada West title in the bag for UBC, but now the full attention is turned to this week’s CIS Nationals that get underway at York University in Toronto today.

The undefeated Thunderbirds kick off their quest for a record 14th CIS crown against Toronto Varsity Blues and Serban feels that the tough test posed by the Vikes on Saturday will set the team in good stead for the challenges facing them out east this week.

“Definitely,” Serban said. “[Victoria] definitely made us work for it. We were down 1-0 first half. We knew we needed to come back. Got a quick goal, luckily, then it was all about tough work.

“My team-mates just worked hard the whole game and now we can fly out to Toronto happy and with the world of confidence and hopefully we’ll be able to do well at nationals.”

So with all that he’s achieve this past year, what would winning his first national title in Toronto this week mean to Serban?

“It would be amazing,” Serban said with an instant smile at the thought. “It’s tough to come by trophies. It’s so much competition for any trophy, so that’s our main goal. From the start of playing with UBC, that’s what I wanted to do. I wanted to win nationals. That’s been the main goal and now my focus is there and it’s going to mean everything if we win it. To me and to the rest of the guys.”

Sunday’s final is also Serban’s 20th birthday, if you need any omens.

Confidence is high in the Thunderbirds camp but they know they’ll have to do it the hard way, with a semi-final against defending champions and top seeds, York Lions, looking set for Saturday.

However this week pans out for Serban and the Thunderbirds, the future is looking very bright for the full back, who earned Canada West All-Team honours last week.

Serban will return to WFC2’s preseason camp shortly, ahead of the 2016 USL season. The young defender is certainly turning heads and looks to be a great prospect for the Whitecaps. And as far as Coach Mosher is concerned, he sees a bright future for him in the game.

“Who knows how far this kid could go,” Mosher told us. “At every level he goes to, he does well. He did well with the [Canadian] U20s, he’s done well with the USL team. Great kid. Super attitude. Intelligent. Those are pretty darn good prerequisites.

“I think for him, it’s to progress at that USL level and if he can keep developing there, maybe there’s opportunities beyond that. That’s probably for him the next step. To become a real solid pro at that level and see where he goes.”

It will certainly be an interesting journey to watch and hopefully it will be in a blue and white Whitecaps strip.