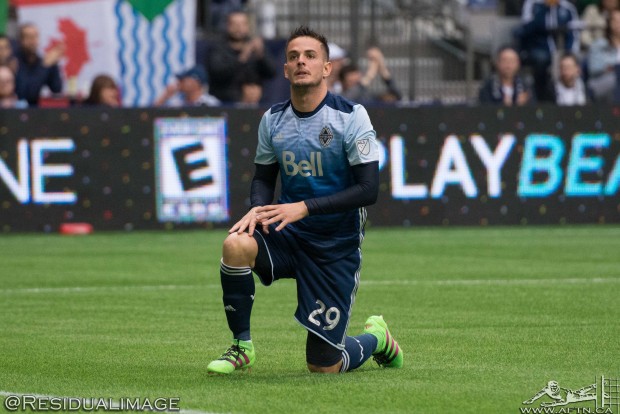 The Vancouver Whitecaps Uruguayan DP hasn’t scored in his last 14 MLS matches and has one goal from open play in his last 29 games. His overall strike rate in MLS is one goal every 324 minutes. [A tip of the hat to TSN radio’s Mike Martignago for his tireless work as Mr Statto for those]

Those stats are alarming and are getting worse every week.

So how do you solve a problem like Rivero? Can you, or is it time to cut bait and let him go for someone new?

We can see that happening come the summer, but right now, he needs to earn his DP money somehow. With that in mind, here’s our “Top Ten Ways Octavio Rivero Can Earn His DP Salary When Not Scoring”….

10 – With his animated gestures during matches, a future as Spike should help get the crowd fired up

8 – Frontline leader for all supporters’ marches to BC Place

7 – Russell Teibert’s personal umbrella holder. You know Teibert is fancy like that

6 – Half time pie eating competition for fans. Tagline – “can you finish more than Octavio?”

5 – Marius Rovde always looks tense, he can be his personal masseuse

4 -Extra security doing pat downs and bag checks for supporters entering BC Place. He does well in his hold up play

3 – Produce a stage production of Robinson Crusoe. If anyone knows how to cope with being alone on an island, it’s Octavio