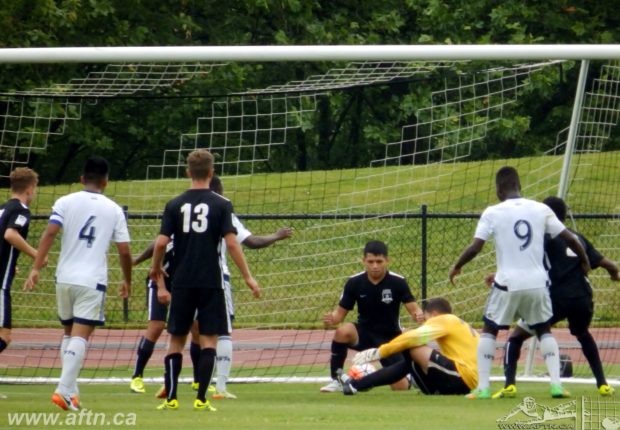 It was a performance and a game to lift the spirits of even the most downbeat Vancouver Whitecaps fan at a drenched Dhillon Field up at UBC on Thursday afternoon.

The ‘Caps U18 put in a five star performance to see off a very talented Sacramento Republic side 5-3 in their quarter-final and book a place in next week’s USSDA Championship Final Four in LA.

A third minute goal from Daniel Sagno eased the nerves and set the ‘Caps on their way, but Sacramento pushed hard for the equaliser and got it with a long range strike in the 33rd minute that curled away from ‘Caps keeper Aidan Aylward.

Parity was only to last two minutes before Tommy Gardner showed great footwork and composure to fire the ‘Caps back into the lead.

Vancouver pressured for the crucial third, forcing some big saves from Sacramento’s keeper Cameron Douglas, the best of which was perhaps a double save from shots from Sagno and Gloire Amanda. As the ‘Caps rued their luck, the Republic tore up the field and tied things up in the 56th minute.

Although the ‘Caps were looking the most dangerous going forward, it still felt like anyone’s game, but Vancouver strength shone through in the end and quick goals from Amanda, Terran Campbell and Andre Baires swung the tie back in the ‘Caps favour, and although Sacramento managed to pull one back, it was a famous 5-3 Vancouver victory in the end. [The highlights of which you can watch below!].

“It was entertaining,” Fagan said of the match. “Lots of goals! I think that’s probably the most we’ve conceded all season. But it was back and forth and we maybe opened ourselves up a little bit trying to score as many goals as we could. Entertaining, exciting.”

There was never any doubt that Sacramento would pose the young ‘Caps a lot of problems. They have assembled a very talented and exciting side in their first season in the USSDA and it certainly bodes well for the future of the club.

The teams had met twice during the regular season, playing out a 2-2 draw in the season opener at Cloverdale in September, before the ‘Caps headed to California and came away with a 3-1 win in February.

Of all the possible quarter-final opponents, that familiarity must have been a boost for the ‘Caps preparations for the tie.

“Maybe, just because we knew what we were going to talk about and we were able to put a plan in place,” Fagan told us. “But when you think about it, it’s do or die when it comes to this. Our previous games that we played against them, that’s out the window now. It gave us an idea and it gave us a base to work on.”

For a large section of the U18 squad, the win was a little bit of redemption after the Whitecaps U16 side lost two heartbreaking quarter-finals in 2014 and 2015.

Seven members of the U18 squad were in their third straight quarter-final, with 11 featuring in last year’s U16 quarter-final loss. That continuity, foundations and team spirit have played a huge part in the ‘Caps success this season.

“There’s a lot of players in this group who have experienced it two or three times now,” Fagan noted. “So for them to get over the line is great, but two big games hopefully to go. One for sure, but definitely, hopefully, two.”

So did the ‘Caps management use last year’s penalty shootout heartbreak as a reminder or added motivation heading in to this one?

“Individually,” Fagan admitted. “To be honest, I didn’t really speak to the collective too much about it. In the back of their minds, they knew. You could tell how focused they were. All week in training, I thought it was maybe nerves, but it was focus.”

Despite the terrible conditions, a large crowd came out to cheer the U18s on at UBC, including all the MLS and USL coaching staff and a number of players from teams in the Whitecaps organisation, from the first team down to the pre-Residency.

“It’s great,” Fagan said. “For me, I look and see the U14 pre-Residency, I see the U16s, I see friends, family, supporters. For these kids, they couldn’t ask for anything more.”

The quarter-final victory took the U18’s unbeaten streak to an staggering 33 matches. Two more and the side will become the first Whitecaps Residency team to lift a USSDA national championship.

They’ve come close before of course, agonisingly losing the 2012 Championship game 3-2 to FC Dallas on a late goal. Four years later, and it could be another battle between the two MLS academies to lift the cherished silverware.

Vancouver and Dallas have both made it through to the semi-finals.

Dallas needed an extra time winner to see off Sporting Kansas City 1-0 in their quarter-final and will be the top seeded team, having finished the regular season ranked second in North America (Vancouver were 7th nationally). It’s a very talented Dallas side, building on a key core of the team that lifted last year’s U16 national Championship.

Based on rankings, Dallas should be playing Nomads SC in their semi-final. The San Diego based side were ranked 19th nationally after the end of the regular season and they saw off another MLS academy, Real Salt Lake Arizona, 2-1 in their quarter-final on Thursday.

That should leave the Whitecaps playing the Players Development Academy in their semi-final, after they beat Philadelphia Union 3-1. PDA finished the season with a ranking of 15, having finished third in the Atlantic Division of the East Conference. The ‘Caps have faced the New Jersey side already this season, in the Florida showcase in December, with the teams playing out a 1-1 draw.

Whoever the ‘Caps end up facing in LA next week, Fagan feels he won’t need to say too much to his squad to get them up for the matches. But it’s important that everyone knows that the two hardest games of the season are still to come.

“The occasion is all the motivation that they need,” Fagan told us. “They wanted to get there, they’ve got here. They’ve accomplished nothing at this point. It’s great that they got themselves over that line but the semi-final is a massive, massive game for them and then hopefully the final.”

The semi-finals are scheduled to take place in LA next Thursday, kicking off at 6pm and 8pm at the StubHub Center. The Championship game will unfortunately clash with the ‘Caps home game against Orlando, kicking off at 7.30pm. All matches should hopefully be streamed.

It’s an exciting time for the young ‘Caps, as they look to go one better than the class of 2012 and make history by bringing home a first national title. We’ll have full coverage on AFTN all next week. 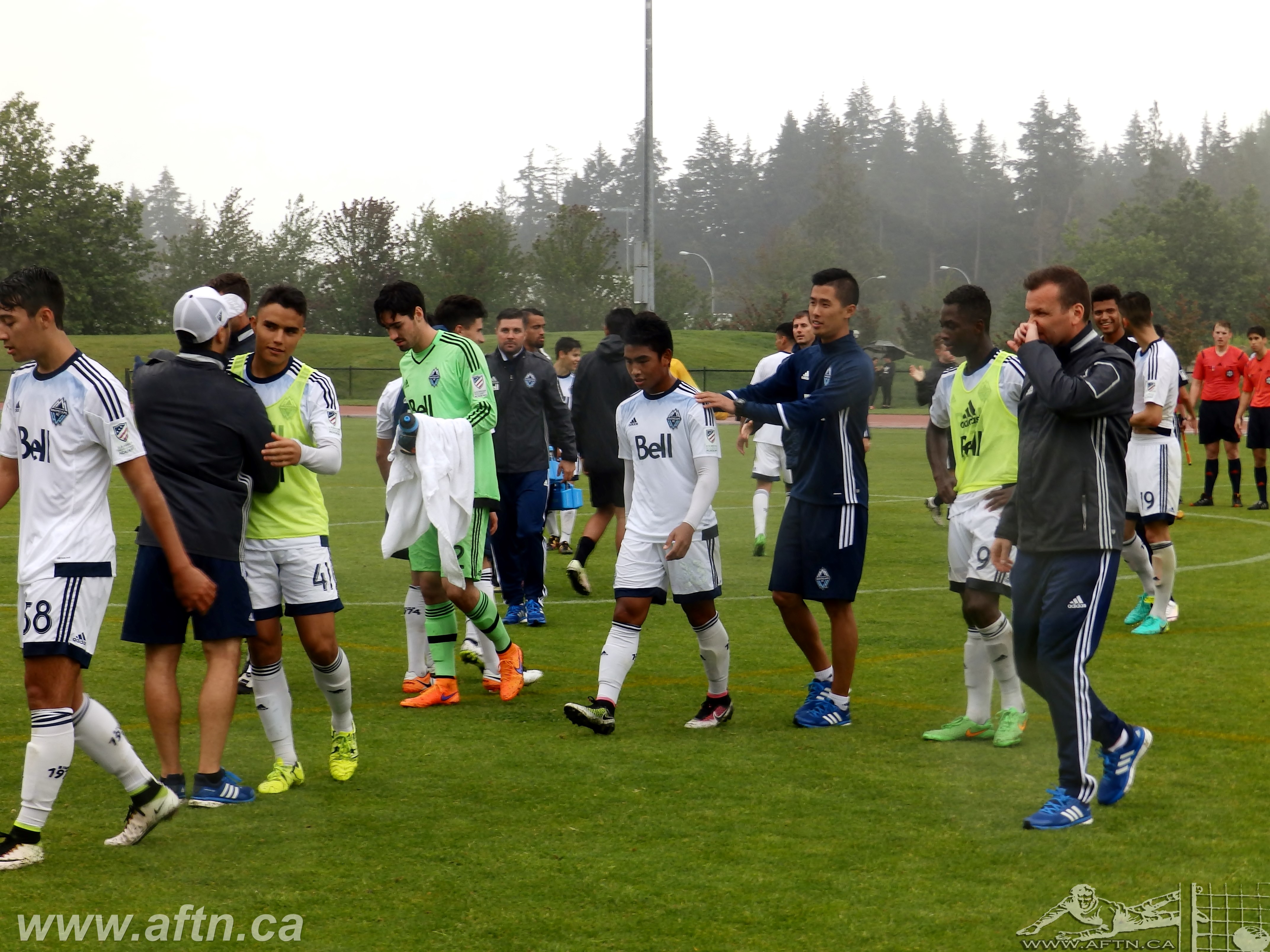