With less than five weeks to go now until the Whitecaps MLS era kicks off, questions are still arising about how the Caps Front Office are handling ticketing and some worrying news from out east is bound to raise a number of new questions amongst the Caps support.

There’s already a lot been written about the mess many fans faced when trying to buy their season tickets.

The Caps have been quiet on specific numbers of season tickets sold, but we are led to believe they’re happy with how things have gone. Now that the date has passed for payments of the final instalment on most people’s tickets, we’ll hopefully be able to get an accurate number from them.

Single game tickets are due to go on sale via Ticketmaster on Saturday 19th February at 10am PST. All games at Empire are currently showing as being available, but not the three games expected to be at BC Place, with prices ranging from $29.50 to $84.50 (which includes fees of $7.25). When we first checked the site on Friday, the highest prices tickets were being listed at a staggering $124.24, so at least that’s changed and must have been an entry error.

But what of the away support? Are they to buy their tickets this way or get a seperate allocation and what about us when we’re going to be away supporters?

Seattle and Portland fans have already been promised 500 tickets to the Cascadia Cup games in September and October. This is a while away of course and the first big away support is going to be for the opening match when Toronto’s U-Sector and Red Patch Boys will be making the journey to the west coast.

It’s not been an easy process for the Toronto fans dealing with the Whitecaps front office with regards to getting tickets for the game and the TFC fans are not being complimentary about how things have played out.

A U-Sector member told AFTN “The Whitecaps have been the hardest front office to deal with in terms of away tickets”. You have to feel a great deal of sympathy for them.

As soon as the fixture was announced, TFC fans starting making plans for the game, as indeed we would have if it had been the reverse, but this soon started to take a horrible turn for them. The U-Sector forum had this post from a member back in January.

Not allocating the supporters groups tickets or TFC fans an actual section would have been a recipe for trouble on the big day. Fans would have travelled anyway and would have been mixed in with Caps fans all over the stadium. Thankfully this isn’t the case.

After much wranglings back and forward, with the Toronto front office even having to get involved to get things done, parts of sections 213 and 214 at Empire have now been allocated to Toronto fans. 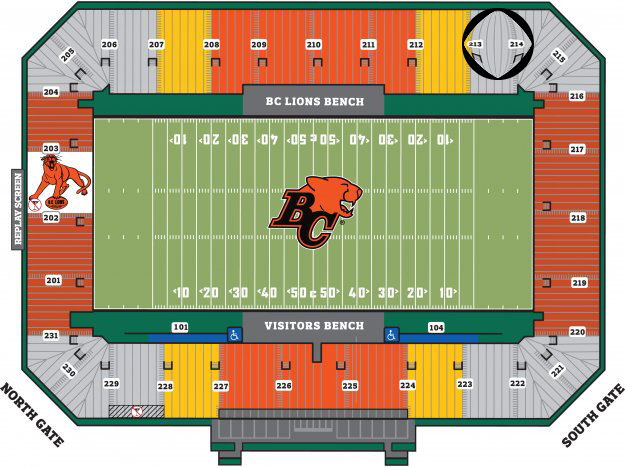 The Whitecaps haven’t brought out a seating plan for Empire yet (we’re only half joking when we say we’re expecting it after the first game!), but based on the Lions seating plan for last year, we’ve circled the section where the Toronto fans will be, according to the information on their sites.

Take a close look. Yup, you’re not reading that incorrectly, they’re going to be in the south-east corner of the stadium and that now raises one of three possibilities.

(1) The Toronto fans have been given the wrong section numbers

or that leaves one other option…

Let’s hope it’s option one and a miscommunication has been made somewhere along the line. Things do seem pretty firm at the Toronto end though as to where they’re going to be, but at this busy time, mistakes can get made.

If it’s option 2 or 3, then no-one is going to be happy and both seem insane thinking and planning to me.

Putting the TFC fans that close to the Southsiders is a recipe for trouble and could create a situation that would be used to beat the Southsiders, as a group, around the head with. Those sections are also situated close to families and will sandwich the TFC fans between the core Southsiders and the Prawnsiders (Southsider members who have chosen that section of the grandstand). It is also a bottleneck for entering and leaving your seat.

We need away support at the Caps games. We want away support at the Caps games. I personally would love to have the away support that close to us, so we can bait and taunt them for the 90 minutes like I’m used to back in the UK. This isn’t the UK though. There’s no segregation fence and any sniff of trouble would be disasterous for supporters groups throughout MLS. The fact that there is only one real entrance and walkway for both sets of fans at that end of the stadium would also be worrying.

For all those reasons and the fact that when I was having meetings with the Caps FO last year, they told us that they wanted away supporters as far away from the Southside as possible to avoid any sort of trouble, we have to rule the second option out.

That would leave option 3. One which would piss off the Southsiders no end and one I don’t want to speculate on until we know if it’s going to be the case or not. If the Caps did go with this option, let’s hope they’re prepared for the shitstorm that will follow.

Aside from the logistics of who’s going to be where and all the fall-out that could come from that, there’s another worrying aspect to the whole debacle. Take a look at the pricing and the restrictions that either the Caps FO or the MLS have imposed on Toronto fans travelling:

– Price per ticket is $35 (plus applicable fees and taxes)
– Tickets will be available to purchase on February 24 (that’s after fans can just pick up cheaper tickets elsewhere in the stadium from the general Ticketmaster sale)
– In the event that 50 or more people travel, a front office staff member from TFC is required to attend
– A list of everyones name who purchased tickets will be necessary

According to both the U-Sector and Red Patch Boys forums there were originally some other restrictions that they were looking to enforce. Curious as to what these were? Well here they are…

It’s actually easier to emigrate here than go to a game!

The Red Patch Boys aren’t happy with what restrictions are being enforced. Commenting on their forum, their President Boris Aquilar said: Since late December the travel team has been gearing up for the new season with our trip to Vancouver. We have tossed around many ideas that would increase the number of RPBs and away supporters in attendance, however we are having a tough time getting co-operation from the ticket reps in Vancouver. It seems they do not have a supporter group plan in place.

We have been working with TFC front office in solving this, but were recently informed that MLS will require the information of each person assigned to each specific seat at the game. We were also told that if we have 50 or more supporters travelling on this trip, a front office staff member is required to travel with us.
We are not comfortable with any of this since it seems we are being faced with additional rules, making it difficult for us to plan a successful away trip to support our team.

Now, those restrictions that do remain make sense in some ways. When I’ve bought tickets for big games in the UK, my name is often printed on the ticket. If someone is coming with the intent of causing trouble (which I would hope is unlikely in Canada), then all they’ll do is buy their tickets elsewhere, so it’s not really going to stop that. We were also told last year that large groups of travelling supporters would require the respective club to provide security.

The big question from Boris’ comments though is do the Whitecaps have a plan for travelling supporters group and if not, why not?

We also have to wonder if these restrictions are going to be enforced on Caps fans travelling elsewhere. There’s a few games, especially the west coast ones, where we’re likely to have over 50 people travelling. This will be a pain in the ass for the Caps to have to provide someone from the FO to attend, especially if we organise a special non west coast trip. Of course, maybe it’s just because Toronto fans need a chaperone until they’re all grown up!

It’s expected, but not certain, that for the return leg TFC will offer Vancouver fans 150 tickets in a designated section as they always do. Their normal procedures would see them mailing the tickets out to a single representative of Vancouver supporters, and offer travellers a security escort into and out of the stadium.

This situation raise some other questions with regards to Caps fans travelling to other MLS stadiums. Are we going to have a seperate “away support” section at every stadium? How are we meant to buy tickets? (although I do know that the Southsiders are building up an excellent network of ticket reps at other MLS clubs). What other restrictions may be placed on us travelling to games?

With more and more travelling support becoming the norm in MLS, the clubs need to get their act together with this and quickly. There should be a standard league-wide policy. Creating the culture of away fans is what will give the MLS longevity and it’s important that the Whitecaps, and all of the MLS clubs, always have people that fully understand football supporters culture in the right jobs in the front office and especially in ticketing.

In the meantime, we need to find out a little more about what we’re actually going to be faced with at home first of all. I’m just going to be glad when March comes and we just have to worry about all of the stuff ON the pitch.