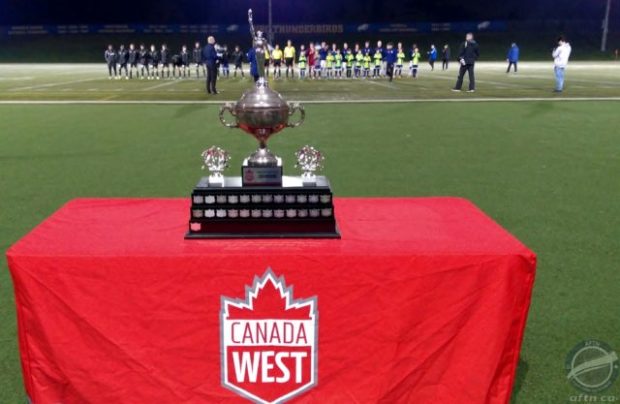 Saturday’s Canada West final is a battle between two teams operating at opposite ends of the spectrum in terms of what they’ve achieved on the pitch in the conference and at the nationals over the years.

For the hosting UBC Thunderbirds, Friday night’s 2-0 semi-final win over Saskatchewan Huskies clinched another spot at the U Sports nationals, as they look to rack up their 20th, and third straight, Canada West championship on Saturday evening.

Standing in their way is a new foe, the Calgary Dinos, who got by cross city rivals Mount Royal Cougars 2-1 in an exciting semi-final that sees the Albertans looking to add to their first and only Canada West crown from way back in 1980.

Both teams booked a place at next week’s nationals in Montreal with their victories, and while UBC will look to add to the record-setting 13 U Sports titles they already have to their name, Calgary will now be heading to the nationals for the first time in their history.

The Gold medal game may still be to come, but what that victory over the Huskies meant to everyone associated with the Dinos, both on and off the pitch, was very clear to see.

“It’s a massive achievement,” Dinos head coach Brendan O’Connell told AFTN after their win. “We started the season off really slow and gathered momentum. For a lot of people behind the scenes that wanted that result, they’ve got it.

“We’re just going to enjoy this moment for the school, enjoy the moment for people behind the scenes that have been supporting this program for 30 odd years, so today it was for them.”

Calgary last featured in the Canada West Gold Medal game in 2006, going down to a heavy 4-1 loss to Trinity Western. It’s been a long drought since, but it’s been a fantastic season for the Dino’s with both the men’s and the women’s sides making the championship game and going for gold on Saturday. Both of them against UBC.

“There’s good coaches and good people that are supporting the group,” O’Connell said of the University’s success this season. “That support network has helped these boys believe that they can get there. We’ve always said if we can make the playoffs, it’s just one game at a time. They showed amazing character today and they’ve pulled it off. They’re enjoying it and we’re going to go on a road trip east.”

They’ll be joined on that trip by UBC, and while it would be more of a shock if the almost perennial Thunderbirds weren’t heading to the big show, it’s an achievement that 24-year head coach Mike Mosher never tires of securing. 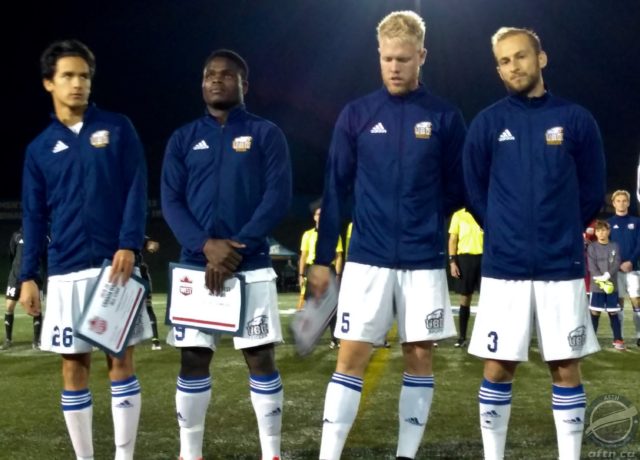 Heading into this weekend’s Canada West Final Four, it was a clear two part plan for UBC. Secure the nationals berth on Friday, then add the golden cherry on top the following day. Part one has now been achieved, leaving Mosher delighted.

“I thought we started reasonably well before [some injuries] kind of unsettled us a little bit,” Mosher told us after the match. “We just had to find our legs. Through it all, we didn’t give up much. We’ve said from day one, if we don’t concede, we will find ways to score goals, because we’ve got the players to do that. We put trust in that and we found our way.”

Both of Friday’s victors got there with strong defensive performances. Calgary had to withstand some constant Mount Royal pressure at the start and end of both halfs. But they stood tall, bent a little, but didn’t break, only giving up a contentious 43rd minute penalty to the Prairie Division champions.

The Cougars leading scorer, Mohamed El Gandour, slotted that one away, cancelling out Derek Brust’s header that had put the Dinos into a 16th minute lead.

Mount Royal launched a concerted effort to go in front after half time, but Calgary held firm, eventually going ahead with what was to prove to be the match winner with 12 minutes remaining. And it was a penalty of their own that did the damage, with Mark Bohdan picking himself up off the floor to fire it home.

The goal was only his second of the season, but the forward clearly has a sense for the big occasion, with his first coming the previous week, an 88th minute winner against Trinity Western that booked Calgary’s place in the Final Four. Fast forward six days later, and his goal was sending them to the nationals.

Just like last week, Mark Bohdan scores a late goal to break the tie! He is hauled down in the box, then converts on the penalty! Dinos lead 2-1 late in this one!#GoDinos #WinTheWest pic.twitter.com/MkcqPDDwwj

The Dinos faced 13 shots on the afternoon, and were only able to fire five of their own off in return, but third year keeper Jake Ruschkowski was a match for them, recording five saves, part of a sterling team effort defensively.

“All credit to Mount Royal, they’ve got individual players, they’ve got good movement, and they can get your a goal,” O’Connell mused. “They troubled us a little bit, but we were solid and we kept them out in the second half, which was the most important thing.”

Their opponents in Saturday’s gold medal game put in another excellent defensive performance of their own, with Jason Roberts keeping his second straight clean sheet these playoffs in their 2-0 win over Saskatchewan. It was their ninth shutout of the season, their third straight, and their fifth in six matches.

The Huskies came into this one as the in-form team, unbeaten in seven and with only two goals conceded, but they had no answer for a Thunderbirds side that rarely put a foot wrong throughout and turned in an almost complete team performance to secure the win, with the UBC defence comfortably thwarting anything Saskatchewan tried to muster and their attack taking their time to pick their moments to get the breakthroughs they were looking for.

“[Saskatchewan] have some decent players, but I just feel when we get going on our pitch, we’re tough to deal with,” Mosher told us. “We’re going to own a lot of games. They had a good spell towards the end of the first half, but when we’re set us properly defensively, and not going to get done on counters, we’re okay.

“The message was just patience. Patience. We’ve been there many times this season and sometimes it’s just grinding a team town. I think that was a little bit of the case. We started that 15 minutes [in the second half] where we started to create some decent chances, so we could smell that something was coming.”

The deadlock was finally broken in the 54th minute from an excellent header by senior Kerman Pannu, who had come on as a first half sub for the injured Daniel Kaiser, and the victory was secured eight minutes from time by a lovely low effort from Thomas Gardner, a player who never seems to favour just the easy tap in.

⚽️ MSOC | @ubcmsoc increase their lead after a flurry it's Thomas Gardner's turf burner from 22 yards out giving the hosts a 2-0 advantage over @HuskieAthletics in minute 82.
Game two of @CanadaWest Final Four semifinals nearing an end at Thunderbird Stadium#WinTheWest pic.twitter.com/LfRBDQVnrW

All of that set up a gold medal match not too many would have predicted. It’s an unpredictable game between two teams that haven’t really played each other all that much over the recent years, and one that promises to be an exciting and fresh match up.

“They’re a hard working, honest group,” Mosher said of the Dinos. “They haven’t been at this stage for quite some time, so they’re going to be quite desperate to get themselves a trophy. But we’ll be up for it. Absolutely.”