“When I watch the Whitecaps, I go outta my head. I just can’t get enough”. And neither it seems can the rest of the Vancouver public.

After the years of anticipation, it was all over in what seemed like a flash. But it was epic (a word I seldom use) and worth every minute of that long wait.

When I got home last night I just wanted to gush out all my exuberance in the blog, but thought better of it. One swallow does not a summer make and all that. Time for some solemn Sunday reflections and not to get too carried away.

That said though, GIRFUY Toronto!

We’ll look at the playing side later, but for now we want to look at supporters gameday experience.

The whole day, the entire occasion was even better than I’d been expecting. Getting the three points, and in some style too, was just the icing on the cake. 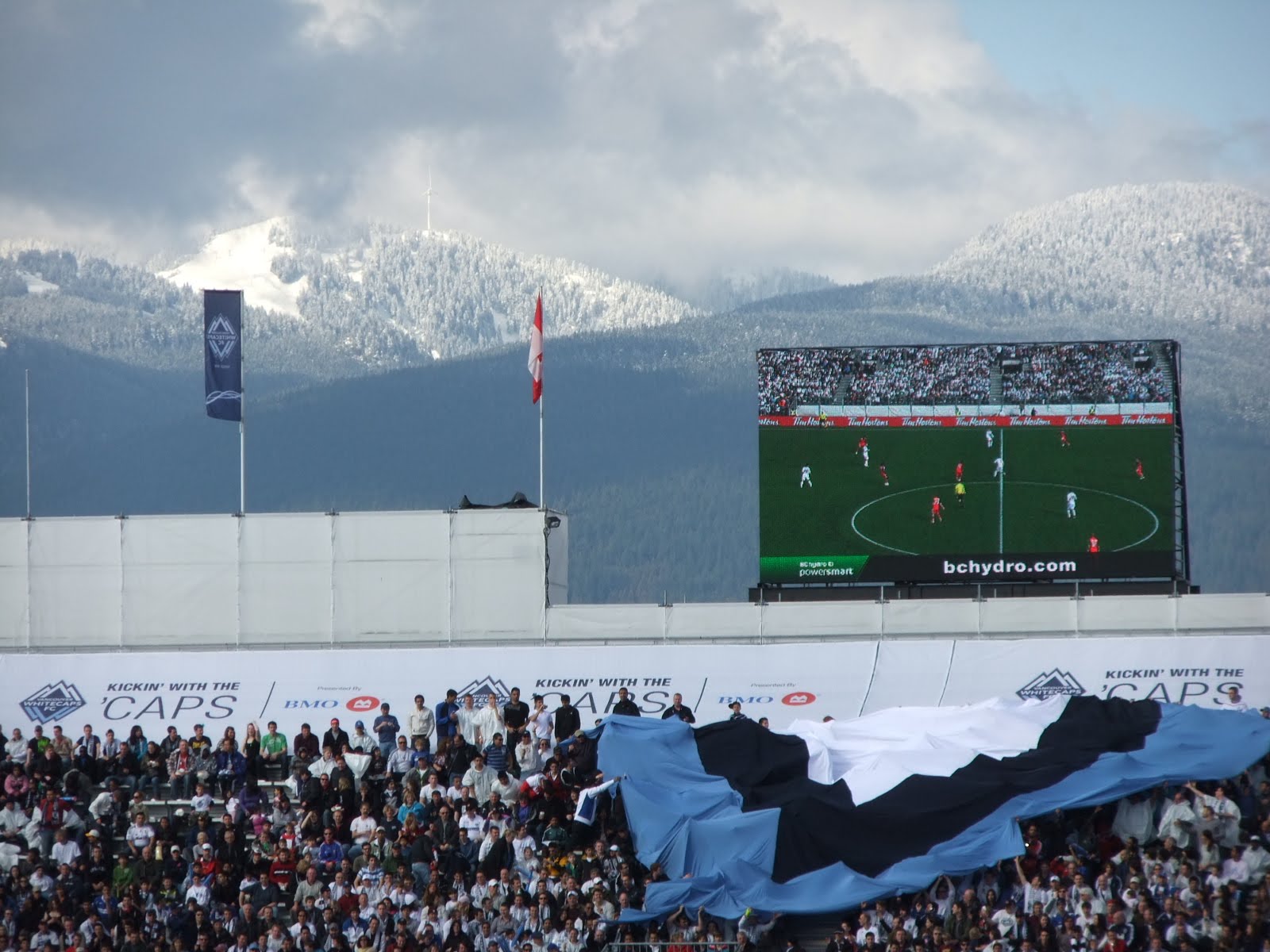 A lot of the general feeling of contentment in Vancouver this morning is a direct happening of not just what happened on the pitch but also off it.

The atmosphere was electric and the excitement palpable.

Every supporter in the stadium was responsible for this.

It wasn’t just the Southsiders. All four corners of the stadium were bouncing, loud and proud as hell. It was a joy to behold.

Who would have thought that something as simple as the old-school call and response “White” – “Caps” chant could have not only been so effective, but also so deafening.

People have told me since I moved here that Vancouver is a “football city” and would embrace Major League Soccer with gusto. I had my doubts but was blown away by what I experienced yesterday. I never thought I’d see that here for a football match and I’m not alone.

Listening to the players post game, watching last night’s news reports, reading todays papers and trawling articles on the web, the one thing that is consistant is how much everyone enjoyed the occasion and the crowd were a huge talking point.

What’s even more exciting about it all, is that this is just the start. With the buzz yesterday created, the Whitecaps are soon going to become the hottest ticket in town outside of Canucks playoff action.

Even from just reading comments on Twitter, Canucks fans were saying that the atmosphere at Empire made them realise what hockey doesn’t give them.

No one who was at the game yesterday could not go home and wax lyrical to all and sundry about what a Whitecaps game is all about. That’s how we’ll grow the game in the city and the national TV coverage is how us and the TFC fans will help grow the game in Canada.

De-Ro was interesting after the game. Praising our fans, he made the just comment that he can only hope that people will come out to support the national team like that.

From a Southsiders point of view, the bigger surroundings led to some logistical kinks that need quickly ironed out.

Being all on the same page and in unison with the songs is a key to having an impact. It was loud as hell in our section but those just a few sections along couldn’t hear us in the wide open space. Even those a few rows up had no idea what we were singing.

We need to make sure that non members can know exactly what it is we’re singing, learn the words and tunes and join in on the ones that they want to. It’ll come. Early days.

Pre-match, at Oscars Pub, everyone was in full flow. The place was packed to the rafters and bar staff told us that they’d never seen the place with a crowd like that, even last year when the Lions had their first full season at Empire Field. 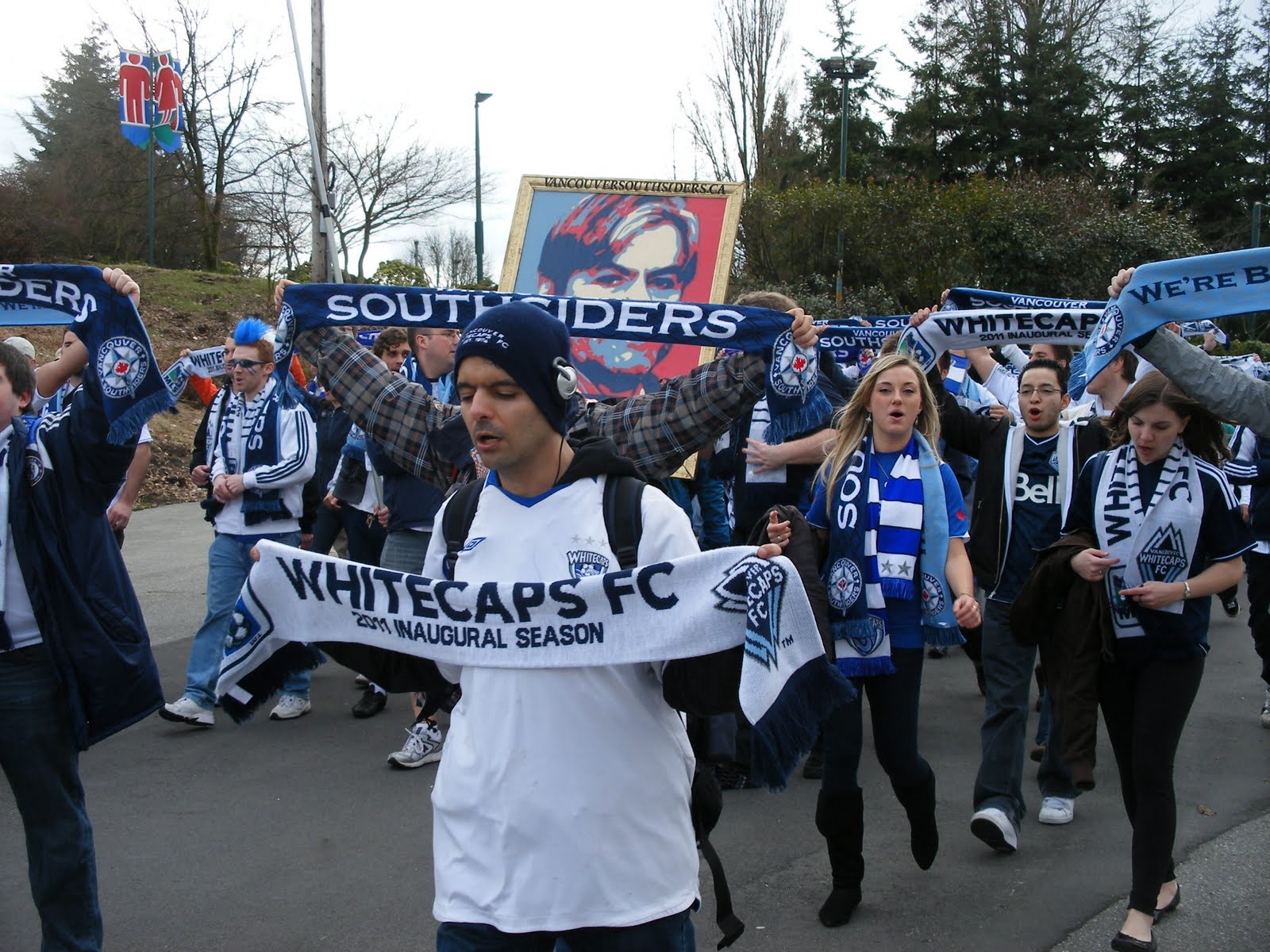 The Southsiders ‘March To The Match’ was also an amazing sight and it wasn’t just members of the group that took part.

As I looked around Oscars, the march and my section at Empire, I didn’t recognise most of the faces around me.

Every one of them though shared the same passion and excitement for the day, and season, that lay ahead.

The key now of course is to keep that excitement, those numbers and the amount of noise going and then to keep growing it. From what I saw yesterday, I don’t think we’ll have a lot to worry about.

Then of course there was ‘poncho power’.

The whole poncho thing backfired on the Club big time. Someone at the Whitecaps this morning must now be thinking “well that was a bad idea”. You don’t give sports fans, let alone football fans, something they can throw!

“Please refrain from throwing your ponchos onto the pitch” was not really a phrase I thought I would ever be hearing at the football.

It was fun watching the ponchos rain down from all four sides of the stadium. Almost as pleasing was watching the couple of attempts at a wave fail! (regular readers will know what a bugbear of mine this is)

Supporters like organic growth, not Club forced initiatives. It was good that the Caps wanted to do something to kickstart it, but I think it’s up to all us fans now to move this forward.

I lost my voice to the Whitecaps yesterday. The city lost their hearts.

[* You can find more photo’s on AFTN Flickr account. Videos will also be appearing on our You Tube channel over the course of the day, so check it out! *]
Tags: Toronto FC, fans, Vancouver Whitecaps, football, major league soccer, MLS, ponchos, soccer, southsiders, supporters, supporter culture, TFC