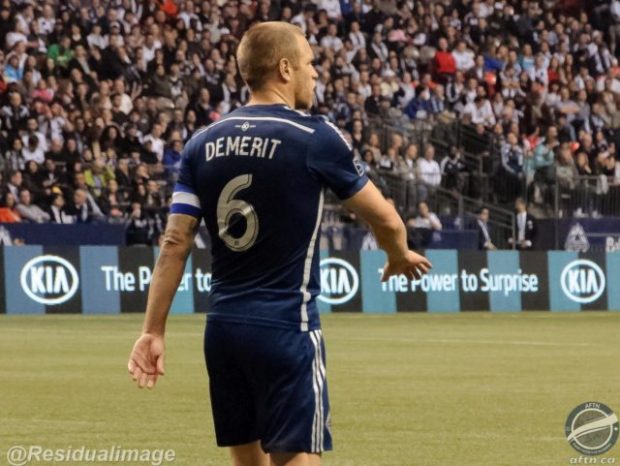 We mentioned that was going to be one of several team XIs coming up on the site over the coming weeks, so today’s it’s time to look at the next one – the Vancouver Whitecaps All-American MLS XI.

Despite being a Canadian club playing in an American league that was primarily set up to help develop American players, the Whitecaps haven’t actually had all that many standout US national team players on their roster these past 10 seasons.

There have been a few quality American players pull on the blue and white, as you can see in our team, but unlike Toronto, Vancouver has not proved to be as popular a landing destination for a lot of the yanks, with the ‘Caps choosing to look more at the South American and Latin American markets as their place to find talent.

That’s left us with a strong team defensively, a potentially explosive attack, and a midfield that leaves a lot to be desired. We’ve lined them up in a 4-3-3 formation based primarily on who we selected and eligibility was based on which country they’ve represented at international level in a couple of cases, and not the country of birth.

Let us know in the comments if you disagree and give us your thoughts on who would win between the Canadian and American teams! 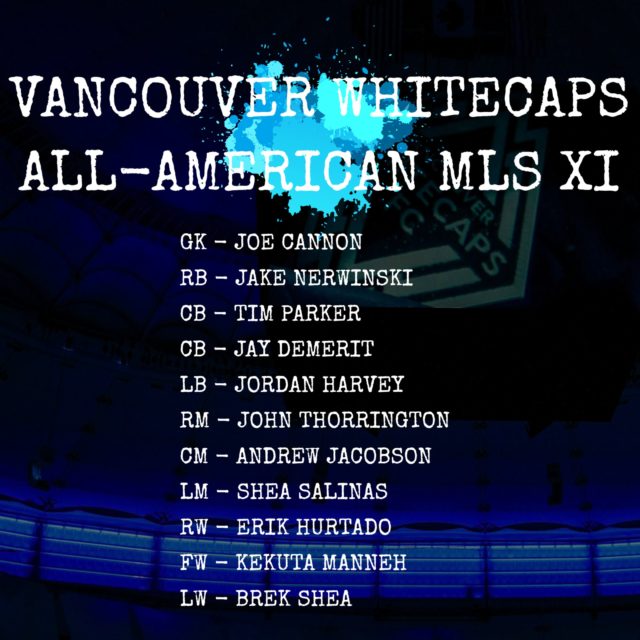 GOALKEEPER – JOE CANNON: The veteran spent three seasons in Vancouver from 2011 to 2013, making 56 MLS appearances for the ‘Caps and keeping 12 clean sheets. After initially losing out to Jay Nolly in that horrible inaugural 2011 season, Cannon took over between the sticks before losing the starting spot during the 2013 season to Brad Knighton, who went on to lose it to David Ousted later that year. Cannon retired at the end of that 2013 season after a 16-year career in the league.

He was a solid keeper right to the end and a great character to have around the locker room. There’s many memorable tales from his time here, from him embracing AFTN’s idea of shooting him out of an actual cannon for marketing purposes, to the Southsiders boom call, to going to Oscar and putting money behind the bar to buy drinks for the long suffering Southsiders that first season. Certainly deserving of his number one jersey in this team.

RIGHT BACK – JAKE NERWINSKI: After representing Iran at international level, our eligibility criteria thus ruled out American born Steven Beitashour, leaving Nerwinski as the clear choice for right back in the team. The New Jersey native has made 75 MLS appearances and counting for the ‘Caps since being drafted by the team in 2017, all but four of them starts. With two goals and six assists to his name in the league, you feel there’s a lot more to come from the 25-year-old.

CENTRE BACKS – TIM PARKER AND JAY DEMERIT: A strong pairing to marshal the middle of the backline, Parker and DeMerit would have been an interesting partnership if they had been able to play together in their time here. Alas their paths did not cross on the pitch, missing each other by mere months.

DeMerit was heralded as the Whitecaps first MLS signing. An American international who had played at the World Cup and with a great back story of rising through the ranks to make it in the game, he was made club captain and was a solid addition for the defence, as well as being a marketing dream for the club. How much of the best Jay DeMerit Vancouver got to see though is debatable.

Three long-term Injuries derailed his time here, forced him to retire midway through the 2014 season after making 72 MLS appearances, scoring once and grabbing one assist, leaving supporters with some good memories of the tough-tackling centre back but wondering what could have been.

The next season New Yorker Tim Parker was drafted by the club to fill the void left by DeMerit at the back and after establishing himself as a first team regular in that first season, he was seldom out of the starting line-up, forming an excellent centre back partnership with Kendall Waston that saw the pair bring the best out of each other.

Parker went on to make 81 MLS appearances for the ‘Caps, scoring just one goal in league play but adding three more across other competitions. He left the club just before the start of the 2018 season, traded to New York Red Bulls following a contract dispute where he felt he was being undervalued for what he was bringing to the team. Was he right? Were the club right not to pay what he was wanting for a domestic centre back? The debate still rages, but the Whitecaps defence was woeful that 2018 season and he’s still with the Red Bulls after becoming an American international, so you can decide for yourselves.

LEFT BACK – JORDAN HARVEY: Any player that gets a tattoo of their club’s stadium on their body deserves their place in an all-time XI, but Harvey also certainly earns it for his contributions on the pitch in his six and a half seasons in Vancouver. A stalwart on the backline, Harvey saw off several young pretenders to his crown over the years, going on to make 200 appearances for the club, 179 of them in MLS play, where he scored 10 league goals and added five assists. It was genuinely sad to see him leave as a free agent at the end of the 2017 season, but he’s still getting it done for LAFC.

DEFENSIVE/CENTRAL MIDFIELD – ANDREW JACOBSON: When you think of the midfielders that the Whitecaps have had in their MLS era, Jacobson probably wouldn’t immediately spring to mind. Unflashy, but he got the job done in his two seasons in Vancouver in 2016 and 2017. He made 48 MLS appearances for the ‘Caps, scoring four goals and grabbing two assists, before hanging up his boots after nine seasons in the league and spells in France and Norway.

RIGHT MIDFIELD – JOHN THORRINGTON: If Thorrington had stayed healthy, how Whitecaps supporters view his two seasons here could be so very different. But we did at least have the John Thorrington Memorial Treatment Table to remember him by. He ended his two seasons here with 31 MLS appearances for the ‘Caps, with no goals and just one assist, but his experience helps our XI here because frankly, it’s slim midfield pickings for this one!

LEFT MIDFIELD – SHEA SALINAS: Like a fine wine, some players get better with age. You could argue that for Salinas. One and done here in Vancouver, we never really got to see what he could do in that horrible inaugural season. He made 26 MLS appearances for the ‘Caps in 2011, 18 of them starts, scoring one goal and adding three assists. I’m not sure fans were neither up nor down when he went back to San Jose the following year, but he’s been there ever since, producing goals and assists and having a stellar season last year with a career high six goals. I’d fancy him on the left wing here to do the same, while also putting in the defensive shift needed to let Harvey get forward.

RIGHT WING – ERIK HURTADO: Much maligned during his time here, Hurtado was a hard worker, improving his game and football IQ year upon year. We just started to see some of the results of that on the pitch when he left for Sporting KC. He could be electric, he could come up with a spectacular strike, but he could also miss a sitter, or three, in front of goal. Drafted in 2013, Hurtado spent six seasons in Vancouver with more than half of his 105 MLS appearances coming off the bench. He scored 12 goals during his time here and added 10 assists, never making the breakthrough in consistency he often threatened.

LEFT WING – BREK SHEA: Talking of much maligned players, I think it’s fair to say that Shea was never really a fan favourite here. He was something of a strange addition to begin with. Even stranger that he stayed around, although triggering his contract with appearances played a huge part in that.

Yet despite being heavily criticised by a number of fans, he produced. He scored seven goals and had four assists in 53 MLS appearances, but he also scored in the Canadian Championship and the Champions League. He could be electric, he could come up with a spectacular strike, but he could also miss a sitter, or three, in front of goal. Wait, that sounds familiar. But he would certainly complete a potentially explosive left side of the park for the ‘Caps in this team, with all three pieces also able to put in the defensive coverage required.

FORWARD – KEKUTA MANNEH: Like many on this team, Manneh never rose to the heights we expected of him. He showed his immense talent in patches, but he could be easily read at times when he just put his head down and ran towards the box. On his game he could be unplayable, as the Sounders found out in his best ever game for the club – his hat-trick performance in Seattle in 2013. He played through the middle that game. His old boss Paul Dalglish said he felt that was where his best position was. We agree, so he leads the line for us in this team.

Manneh made 101 MLS appearances for the ‘Caps across five seasons, scoring 22 goals and adding 12 assists. Even though he cracked the American national team briefly, he’s bounced around since, never hitting the dizzy heights many expected of him.

He could be electric, he could come up with a spectacular strike, but he could also miss a sitter in front of goal. Ah right, there’s a trend. Yup, this is a front three that can excite and frustrate in equal measure. This entire team, much like the Whitecaps themselves these past 10 years, is frustratingly inconsistent. Who knows what you’re going to get out on the pitch?

Is that a team that could compete in MLS? Did we miss anyone out that you feel should be in? And who would win against our Whitecaps Canadian XI? Let us know your thoughts below.