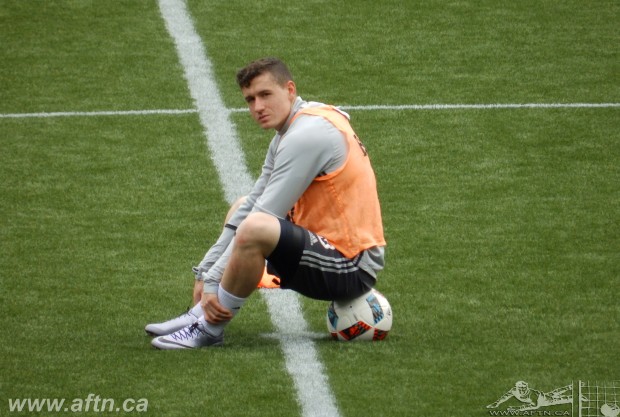 With the 2016 MLS season right around the corner there is a buzz of optimism in the air with the possibilities of what can happen this season for Vancouver Whitecaps.

In David Ousted, Kendall Waston, Matias Laba, Pedro Morales and Octavio Rivero, the key spine of the team have been signed up for the future and there aren’t a lot of starting positions available on this team. But there are two positions where there have been good battles all preseason long, and that has been at the full back spots.

Both right back and left back positions promise to be fiercely contested battles for starting spots all season long.

At the left back position you have MLS veteran Jordan Harvey and his Harvey Army of supporters battling the young up and coming Canadian Sam Adekugbe for the right to start for this team.

Adekugbe won the starting job shortly after the beginning of last season, but injuries derailed his season and he never really settled back into the role he had battled fiercely to win. Harvey was able to fill in nicely for the injured Adekugbe and never looked back for the remainder of the MLS season, cementing himself as the starter once again.

At the right back spot last season you had MLS veteran Steven Beitashour, as the fast paced defender that was able to move the ball into the box on his crosses that resulted in him being the assist leader for the Whitecaps defenders, and second on the team overall.

Sitting in the wings was the Costa Rican national team player Jordan Smith, who at times last season showed he has the speed to be a dangerous MLS player moving forward, but his defensive ability was called into question a few times with his mistakes.

With the Whitecaps declining to offer a contract this season to Beitashour, the team was able to bring in another exciting young Canadian, Fraser Aird, into the team. Aird has been a staple at Rangers in Scotland for the past 5 seasons and he was able to get quality minutes as they fought their way up the lower leagues following relegation due to financial troubles. After starting as a midfielder, he has been moved to the right back position by both Rangers and the Canadian National team.

With a lot of choices now facing Carl Robinson in the full back positions, let’s take a look at the options the four different players provide him:

This will be Adekugbe’s fourth season as a professional player for Vancouver. Since signing his first pro contract in 2013, the young player has only amassed 14 games for the Whitecaps, nine of them starts. He has shown he is the prototypical full back for Robinson’s desired plan of attack. He has the speed and pace to be able to attack down the wings and the acceleration to get back on defence if the ball is turned over. With Robinson saying he wants his full backs to attack this season, there will be plenty of games for Adekugbe to show his skills over the course of the year.

With all the MLS, Canadian Championship and Champions League games this season there will be ample opportunities to show Robinson that he is a long term solution for this Whitecaps teams future.

Entering his 11th season in MLS, five and a half of them with Vancouver, Harvey is the veteran presence that will help teach Adekugbe the little nuances of the game that you can only learn from players that have played in the games over the years. Even when losing his starting spot last season, Harvey was always the constant professional with the media and in training. He never showed publicly that it bothered him or let his mood change during training. Instead putting in the work to challenge himself and Adekugbe to regain his starting spot.

By the looks of the starting XI the Whitecaps played this past weekend down in Portland, it looks like the starting spot to begin this season will once again be Harvey’s to lose.

With Adekugbe being called up recently to the Canadian National team, there is a strong possibility he will be away for the Houston game at the end of March and some other games going forward, all of which gives games for Harvey to continue to prove he is a solid veteran presence that Robinson should have no problem calling on this season.

After being acquired on a loan last season from Costa Rican side Deportivo Saprissa, Smith was able to show Vancouver supporters that he has the speed to be a dangerous option moving forward for this team. At times he also showed that he isn’t the most sound defensive player, but he has the potential to be a good MLS player. With over 100+ games for Saprissa and his recent call ups to the Costa Rican national team the future is bright for Smith. You don’t have that by being a poor player.

Smith will continue to be called up to his national team but if he doesn’t improve his defensive play he could see himself on the bench this season sitting behind Aird for most of the year.

The right back starting spot appeared to be Smith’s to lose heading in to preseason but he appears to have been beaten out by the strong showing from Aird.

This was a player that a lot of people wanted to see in a Whitecaps kit but never thought it would happen this quickly. After making 62 appearances and netting 9 goals for Rangers in the lower leagues of Scotland, Aird was switched from a midfield position to a right back position when Rangers brought in new manager Mark Warburton.

He was brought in to Vancouver on a transfer agreement with an option to purchase at the end by Robinson. Aird has stated that if he can get in a good number of games in this season 25-35 he would have no qualms about staying in Vancouver after this season, but he also has an eye on returning to Europe.

When it was first announced we ran a poll and 58% on respondents thought Aird would be no more than a gameday squad player for the Whitecaps. 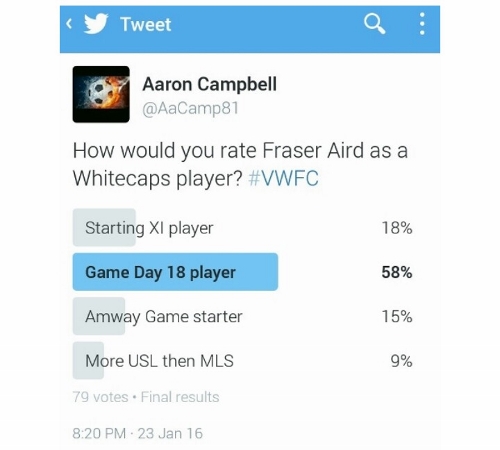 After a great showing in the preseason, which included two crosses turned into own goals, and showcasing his ability to get down the wing with blazing speed, he won over the supporters, and likely the ‘Caps management, who now see him as the starting right back to begin this season and it is looking more and more likely that the role is now Aird’s to lose. 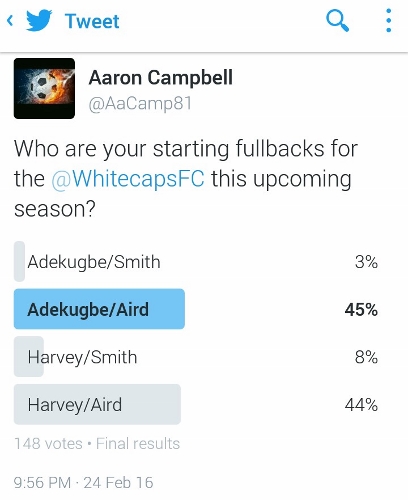 There is a worry that both Aird and Smith could be missing at times on international duty, which would likely force Tim Parker to slot back into a role he filled at times last season. As long as he’s not away with the US team himself.

So a lot for Robinson to consider this season. It’s a battle in both positions that should continue all season long and there’s likely to be a few interesting twists and turns along the way, with fierce competition every step. All of which should only be beneficial for the Whitecaps.